Sirius XM Holdings (NASDAQ:SIRI) and Netflix (NASDAQ:NFLX) dominate their respective corners of the entertainment industry. As they've risen to power over the last decade, they've earned fortunes for investors along the way.

But which of these stocks should you buy today? Let's analyze Sirius XM and Netflix in four areas -- competitive position, financial strength, growth, and valuation -- to see which stock is best for your portfolio. 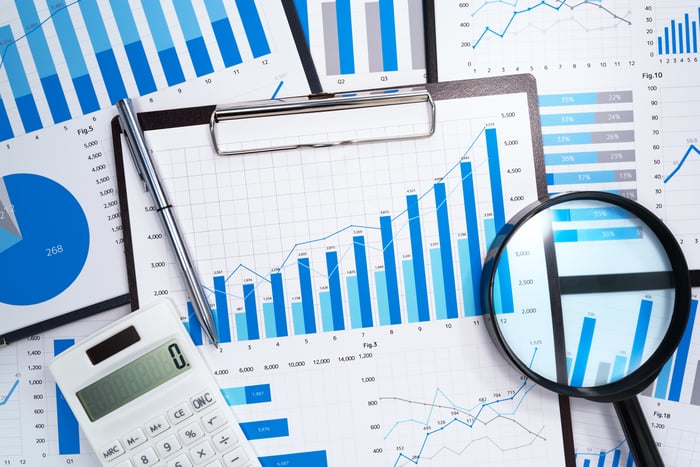 Netflix is the world's leading internet TV service. Its 139 million paid subscribers in more than 190 countries give it powerful scale advantages over its competitors. Yet Netflix remains firmly in expansion mode: The company is aggressively reinvesting its profits into more and better content. Netflix has amassed a vast library of third-party-produced TV shows and movies. It's also ramping up its own internally created content, including a host of award-winning films. Together, this has allowed Netflix to flex its pricing power in recent years, while still gaining subscribers at a rapid clip.

Sirius XM, meanwhile, is the world's largest radio company as measured by revenue. Its 34 million subscribers, while small by Netflix's standards, reigns supreme in the world of satellite radio. The company's technology allows users to enjoy reliable, commercial-free music, talk shows, and news programs. Importantly, Sirius XM is available in vehicles from every major car manufacturer, as well as on mobile and other internet-connected devices. This convenient access has helped Sirius gain a consistent flow of new subscribers.

However, short-sellers would have you believe that satellite radio will soon go the way of the dinosaur now that other popular streaming options exist, such as Apple Music and Spotify. Yet judging by Sirius XM's recent subscriber gains, this appears unlikely to be the case any time in the near future. Still, few would argue that internet-based TV isn't where the world is heading. Netflix's dominance in this area places it in a stronger competitive position over the long term.

Check out the latest earnings call transcripts for Sirius XM and Netflix.

Let's now take a look at some key financial metrics for these entertainment leaders.

Both Sirius XM and Netflix have more than $6 billion in net debt on their balance sheets. They also produced remarkably similar operating and net income over the past year. Where they differ, however, is in cash flow production. Sirius' strong free cash flow allows it buy back its stock and pay a small but growing dividend to investors. Netflix, in contrast, generated negative free cash flow, as it continues to spend heavily on streaming content. This gives Sirius the edge here.

Sirius may generate more cash, but Netflix is growing much faster. Over the past five years, Netflix's revenue, operating income, and earnings-per-share growth have all dramatically exceeded those of Sirius XM. 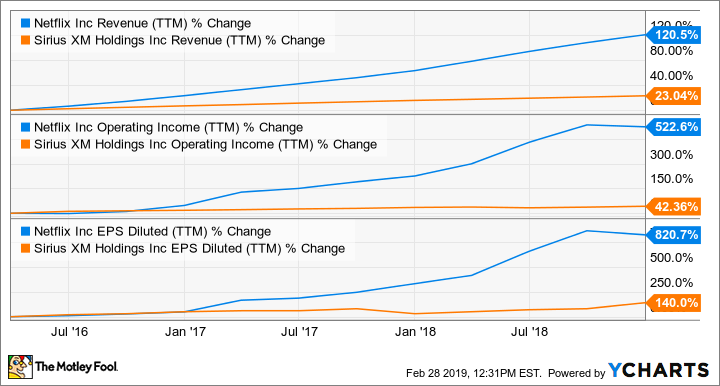 The next five years are likely to be more of the same. Netflix is projected to grow its earnings by nearly 50% annually during this time, as it continues to expand internationally. Sirius, meanwhile, is expected to increase its profits by about 32% annually over the next half-decade, as share repurchases and the operating leverage inherent in its business model help earnings per share rise at a faster rate than revenue.

As such, both businesses are likely to enjoy strong growth for the foreseeable future, but Netflix has a clear edge here.

Netflix's stock is significantly more expensive than Sirius XM's based on both sales and expected earnings. This isn't surprising considering Netflix's higher projected growth rate. But even if we account for this -- as we do with the price-to-earnings-to-growth ratio -- Netflix's shares are still more than twice as expensive. Thus, Sirius' stock is currently the better bargain.

Ultimately, you'll need to decide which of these criteria mean the most to you. Value and income-focused investors will likely appreciate Sirius XM's robust free cash flow, capital returns, and more attractively priced stock. Growth investors will no doubt favor Netflix's rapidly rising revenue and earnings. As for me, competitive advantage is of paramount importance, so I would choose Netflix, due to its leading position in internet TV. But the more important question is: Which one of these entertainment leaders will you choose?