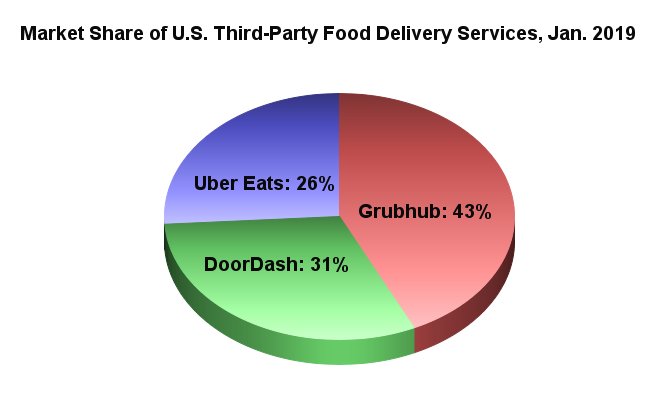 Grubhub became America's largest food delivery service by merging with Seamless and acquiring a long list of smaller rivals, including MenuPages, Allmenus, LAbite, and Tapingo. It also provides nationwide deliveries for Yum! Brands' Taco Bell. However, Grubhub's market share declined from 50% last spring due to competition from DoorDash and Uber Eats, and it's running out of smaller challengers to acquire.

DoorDash, which was valued at $7.1 billion after its latest funding round, overtook Uber Eats in the second half of 2018 and started offering grocery deliveries from Walmart. Uber Eats, which expands Uber's business beyond its core ridesharing services, partnered with McDonald's to launch the McDelivery service. DoorDash and Uber are both reportedly eyeing IPOs, which would give them fresh capital to counter Grubhub. Tougher competition between these market leaders could also result in lower delivery fees, and that might convince more diners to try these services.

Check out the latest earnings call transcript for Grubhub and other companies we cover.