Fitness-tracker sales will be up and down, and services revenues are still scarce.

The most patient investors in wearable-fitness-device company Fitbit (FIT) finally witnessed the long-promised turnaround. Revenues started to rise once again for the first time in a couple of years during the final quarter of 2018, driven by an annual increase in devices sold. It was a good holiday shopping season for the health-technology outfit, but progress on the services side of the business remains barely large enough to deserve its own callout. Ultimately, that means Fitbit's turnaround is left in a precarious position headed into 2019.

Total device shipments in the fourth quarter of 2018 were 5.6 million, a 3% year-over-year rise. That equated to flat year-over-year revenue at $571 million due to lower average selling prices, but a return to profitability at $0.06 per share. This was due to the company's cost-cutting throughout the year.

Fitbit's positive traction to end 2018 was built on the back of new devices, especially the Versa smartwatch, Ace for kids, and Charge 3 fitness tracker. Together, the three made up 79% of all sales. The success of those wristband trackers is expected to carry into the new year: The company has forecast first-quarter sales up 1% to 8% and full-year 2019 sales growth of 1% to 4%. Additionally, earnings for the full year are expected to approach breakeven.

It's good to see Fitbit forecast growth, once again. However, that growth is expected to be meager after several years of declines, so the wearable maker remains in a tough position. Competition remains heavy from the likes of Apple, Samsung, and Chinese manufacturers like Xiaomi, making a business based on hardware sales not exactly a lucrative one. That's where health and other premium services were supposed to come in, but progress there remains slow. 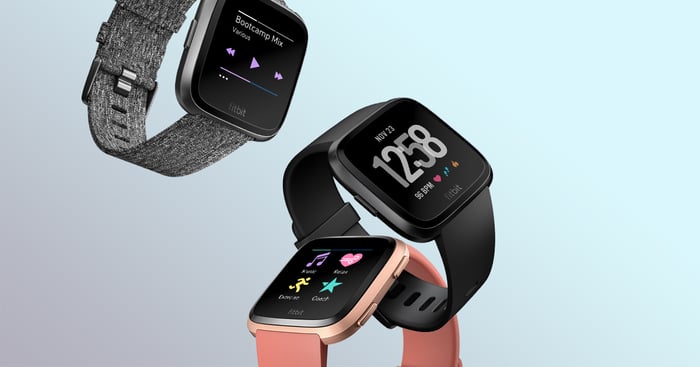 Speaking to the segment's progress, CEO James Park had this to say:

Looking forward, we believe Fitbit Care will enable us to transition our business from device sales only to per-member-per-month pricing, per-employee-per-month pricing, and shared risk models. In fact, just recently we signed a $2 million software and services deal for Fitbit Care with a large national plan on a per-member-per-month model. In addition, we continue to collect clinical data to develop and test FDA-grade systems for health conditions, which include AFib and sleep apnea. We expect the growth of our Health Solutions business to accelerate, driven by global growth and the addition of solutions-based software revenue. As a result, we anticipate that there will be double-digit revenue growth for Fitbit Health Solutions to approximately $100 million in 2019."

Again, more good news as Fitbit tries to get in on the health industry rather than rely solely on tracker and smartwatch sales. At $100 million in annual revenue, though, Health Solutions would still be less than 10% of the total. Plus, the majority of deals within Health Solutions still rely on devices sold. Thus, Fitbit remains highly reliant on the fickle consumer market. Its aspirations to make recurring revenues from software and services is still a long ways off.

Of course, the upshot is that growth is back on the table and the company continues to make progress toward profitability. At least a few Wall Street analysts felt upbeat about Fitbit's prospects as a result. Nevertheless, the wild ride is likely not over yet. Investors should tread lightly with the stock.