Stocks of Macau-centric casino companies lost 25% or more of their value in 2018, and they may not be a good bet this year either. Though gaming revenues bounced 4.4% higher in February following a 5% dip in January -- the first month with a decline since the region began its comeback in 2015 -- there are many signs a weak performance is in the cards for 2019.

So even though those casino operators shares have risen by double-digit percentages since the start of the year, investors should be aware that their hot streak could easily turn cold. 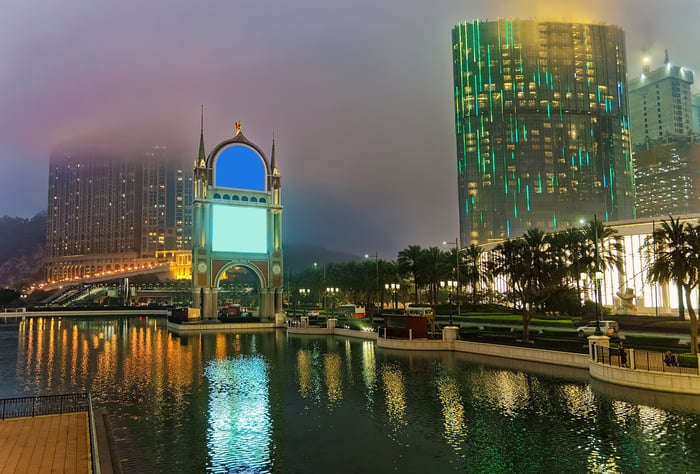 The Macau Gaming Inspection & Coordination Bureau reported gross gaming revenues in the territory rose to 25.4 billion patacas (about $3.1 billion) as the Lunar New Year/Spring Festival began on Feb. 5,  a major holiday period for the casinos. The opening last fall of the Hong Kong-Zhuhai-Macau Bridge, which significantly shortens travel time between those cities, has also helped Macau's casinos.

To be sure, both MGM Resorts (NYSE:MGM) and Melco Resorts & Entertainment (NASDAQ:MLCO) opened new resorts within the past year that ought to boost their earnings. When MGM China reported its fourth-quarter results last month, its year-old MGM Cotai integrated resort delivered a 67% surge in revenue, while adjusted EBITDA more than tripled.

The $1.1 billion luxury Morpheus hotel at Melco's City of Dreams resort, which opened without any new gaming tables after regulators denied its application for them, is accomplishing its purpose of improving the complex's overall performance. Analysts see the Morpheus driving mass-market volumes more than VIP volumes, which should enable it to contribute as much as 40% in revenue growth for Melco.

Even battered Wynn Resorts (NASDAQ:WYNN), which lost half its value from its high point last year, could see more growth even though it's gained some 26% this year.

Check out the latest earnings call transcript for MGM.

Yet there are issues that could weigh on performance. For example, China lowered its GDP growth forecast for 2019 to a range of just 6% to 6.5%, and though that's only a little below the 6.6% growth it reported last year, it would also be the nation's weakest result in 29 years. Wynn CEO Matt Maddox told investors the casino operator is "watching the situation with caution."

And despite a lull in the active trade hostilities between China and the U.S. -- a conflict that cast a pall over many industries last year -- the threat that the trade war could heat up again remains ever-present.

Of more immediate concern for shareholders, however, may be the difficulty casino operators will face when their upcoming results get compared to last year's. In March 2018, gaming revenues surged 22% to 25.9 billion patacas, and they tack on a 27.6% gain in April. Double-digit percentage gains followed through the summer.

Macau will be hard-pressed to match those results, and as new casino resorts open in South Korea, the Philippines, and Japan, it will become even more difficult to maintain anything like the velocity of growth that gaming enjoyed in Macau for the last two years.

Las Vegas Sands (NYSE:LVS) already appears to be suffering from fatigue due to many of these issues; its revenues rose only 2.5% in Q4, a significant deceleration from the 6.7% increase in Q3, while adjusted earnings tumbled 12.5% to $0.77 per share. Adjusted property EBITDA was down 4.7%. Sands derives 58% of its adjusted property EBITDA from Macau. Only Wynn, at 77%, relies more heavily on the Chinese territory.

The other casino operators may find that Sands was simply the leading indicator for the region; although they possess catalysts for growth, those may not be enough to overcome the structural issues they face there.

The Chinese gambling enclave may have put on a relatively good show in February, but that may be about as good as it gets.