The corporate networking software dynamo stumbled as investors reacted to its outlook for the following quarter.

Cloud computing provider Nutanix (NTNX -1.79%) issued a fiscal second-quarter earnings report on Feb. 28 that surprised investors with anemic guidance, causing shares to skid by nearly 33% in the trading session following the earnings release. Below, let's review the quarter's highlights and focus on the third-quarter tea leaves that triggered such an adverse reaction from shareholders. Note that all comparison numbers in this article refer to the prior-year quarter (the second quarter of fiscal 2018).

Check out the latest earnings call transcript for Nutanix. 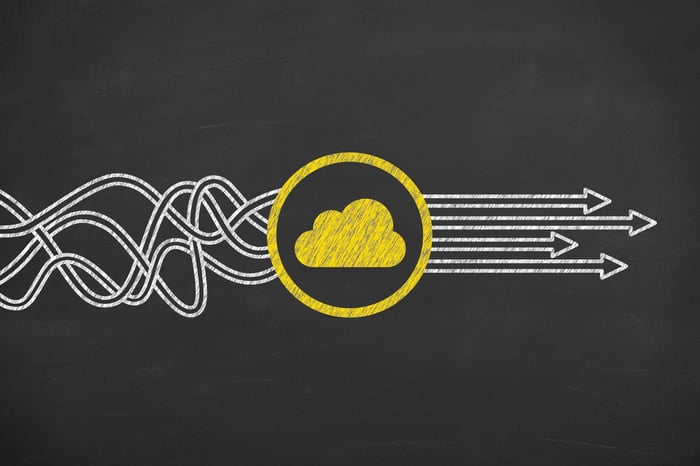 In its earnings release, Nutanix forecast fiscal third-quarter revenue between $290 million and $300 million. At the low end of this band, Nutanix will book virtually flat revenue against the $289.4 million top line it achieved in the third quarter of fiscal 2018. The range blindsided investors who have become accustomed to much more aggressive growth from the organization.

During Nutanix's earnings conference call, CFO Duston Williams explained to investors that management had recently identified "imbalances" in the company's lead-generation spending that had affected its sales development pipeline.

For four quarters (the fourth quarter of fiscal 2017 through the third quarter of fiscal 2018), spending on new leads remained flat, but Nutanix continued to see growth in its sales pipeline and overall top line. Management assumed this trend would continue into 2019, and reallocated more capital away from nuts and bolts spending on sales prospects.

Over the last two quarters, executives apparently recognized that the company was underspending on lead generation, and started to increase resources allocated to this crucial function. Williams noted that the magnitude of the ongoing spending shift to correct the problem is in the range of "a few tens of millions."

The effect of shackling the front end of Nutanix's sales pipeline was worsened by a shortage of sales reps in the first two quarters of fiscal 2019. Management revealed on the earnings call that it's cut back on non-sales hiring in order to optimize its sales personnel levels. Nonetheless, the company anticipates that sales hiring will proceed at a slower rate than previously expected in the third quarter.

During Nutanix's call, executives expressed confidence that neither competition nor changes in market demand played a role in the company's sales pipeline weakness. CEO Dheeraj Pandey reinforced CFO William's assertions that resource allocation is the culprit behind disappointing forward projections:

I just had two simple inputs: It's time and money. And time is what [the] sales force actually puts in, and money is what we give them to go and do all sorts of events and how do you set up meetings. So, we start looking at these different tiers of the funnel, starting from marketing qualified leads, to meeting setup, to opportunities created, to things below that in the funnel itself. And in that sense, I don't think the methodology has changed.

It's just that the input, which is the most basic input, is dollars, and that has a certain formula to that how those dollars convert to leads and to meetings and to opportunity and things of that nature.

In essence, Nutanix is confident that its projected sales deceleration can be addressed over the next several quarters simply by reprioritizing funds to tactical sales activities, along with the hiring of more salespeople. Management doesn't believe that its top-line issues run any further than a rebalancing of inputs. Shareholders will await third-quarter results for the data to support this thesis.