Alibaba, The Flowr Corp, and Samsung can give your portfolio some much-needed foreign flavor.

Many investors look to U.S.-based companies when making their investment decisions, missing out on a world of opportunity in foreign markets. Even when they know the company names, they overlook them because they are unfamiliar with the businesses. 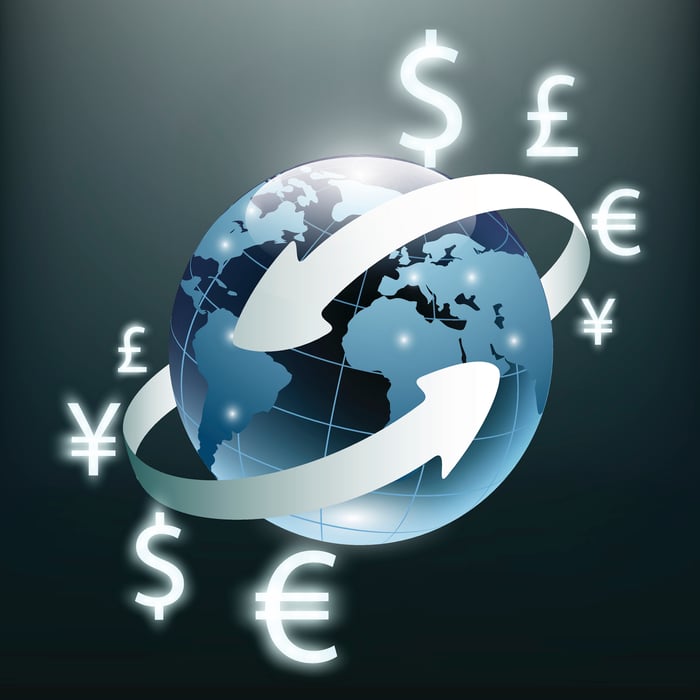 Anders Bylund (Alibaba): Chinese e-commerce giant Alibaba derives "substantially all" of its sales from Chinese customers so far, making it pointless to even include geographical revenue breakdowns in its financial filings. But that will change, and soon.

The company has revealed an ambition to "expand our international and cross-border businesses into an increasing number of international markets, such as Southeast Asia, India, Russia and the European Union." Doing so would expand Alibaba's addressable markets and tap into some of the fastest-growing economies on the planet. The expansion strategy includes buying substantial stakes in local e-commerce services in promising target territories such as Turkey and Singapore.

But that's not the whole story of Alibaba's international expansion plans. Alibaba is winding its way straight into the American market, too.

To that end, the company just announced a partnership with Office Depot (ODP -0.14%) that gives the Chinese company access to the office supplies veteran's store network and distribution services. The deal was heralded as a supply chain boost for small and medium American businesses, but the partnership also gives Alibaba a more direct toehold in North America.

Alibaba's American expansion is more of a trickle than a flood at this point, but the company will surely find a way to set up shop in this key market. This company is all about audacious growth targets, and that includes a bold American strategy.

John Bromels (The Flowr Corp): With recreational cannabis now legal in Canada, it was inevitable that some of the cannabis companies in our neighbor to the north would apply for listing on U.S. exchanges. Of course, some of them are already there. Canopy Growth, for example, has been listed on the NYSE since 2014, and Tilray was just listed on the NASDAQ last year. But those are the big players in the Canadian market.

A much smaller company, Flowr, applied for listing on the NASDAQ in December. While Canopy and Tilray have multibillion-dollar valuations -- $15.6 billion and $7.5 billion, respectively -- Flowr's market cap is just $350 million. And, as you can see, its stock hasn't seen the massive gains that its larger competitors have: 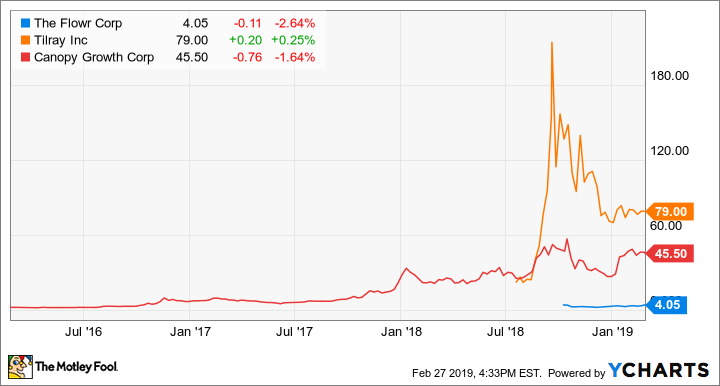 Now, the listing isn't yet a done deal. Flowr will have to register its shares with the SEC and withstand regulatory scrutiny by the NASDAQ before it can be listed. But Flowr's co-CEO Vinay Tolia is confident that Flowr's request will be approved, saying in a press release: "Flowr has made tremendous progress executing on its business plan since becoming a public company last year and we believe the Company is well positioned to pursue additional growth opportunities. A NASDAQ listing is an important step forward for Flowr because we believe it will broaden our access to international investors as we become a truly global company."

If Flowr's request is approved, it will give U.S. investors interested in cannabis companies an intriguing new option for investment.

A tech giant to become a retailer

Rich Duprey (Samsung): There's a good chance you're using a Galaxy smartphone from Samsung right now, and you're at least familiar with its line of smartphones, TVs, computers, and appliances. One thing you haven't really seen from the South Korean technology giant is a physical retail presence, but that's about to change: Samsung recently announced it would be opening three Samsung Experience stores in malls in Houston, Los Angeles, and New York.

The move is an attempt to bring Samsung's products closer to the consumer, much as Apple and Microsoft have done with their own retail locations. According to Samsung's Americas CEO and president, "We want to build a 'playground' for Samsung fans -- a place to learn about and try out all of the amazing new products we have to offer."

Samsung has created a number of retail environments, including pop-up stores and boutiques inside retailers like Best Buy, but this is the electronics giant's first real exploration of the retail experience. It comes at a questionable time for mall operators, who are seeing traffic decline, and Sony had previously been down this path with dozens of Sony Style stores that it ended up shuttering following the recession.

Investors may be familiar with Samsung's long list of technological gadgets and equipment, but bringing a retail angle to the U.S. is something we haven't really seen before.