Baozun (BZUN 7.88%) announced its fourth-quarter and full-year 2018 results on Wednesday, and the Chinese e-commerce services leader once again reported huge growth in merchandise volume, revenue, and earnings. But the results came in a little short of Wall Street estimates, and expenses continued to grow at a very fast pace.

And while the latter probably played a role in the company's earnings coming up "short" of analyst expectations (I'd assert that Mr. Market simply guessed wrong), management remains steadfast that it will continue to spend on the resources that are driving the company's fast growth.

Let's look at Baozun's results, and what management had to say. 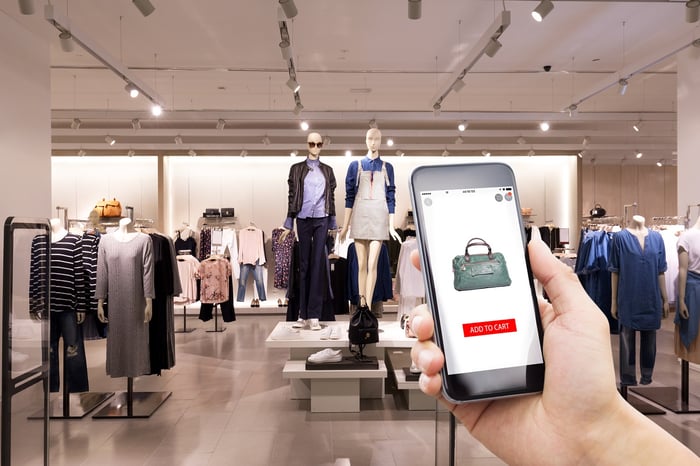 Baozun is helping merchants and brands bridge the gap between brick and mortar and e-commerce. Image source: Getty Images.

Investments in partnerships, services and marketing are paying off

(Note: Baozun collects and reports revenue in Chinese yuan, and also provides dollar-adjusted results for some metrics. The results below are based on its native yuan unless otherwise noted.)

Over the past year or so, Baozun has steadily increased its focus on providing Chinese merchants with the tools and technology to succeed in e-commerce, and the results are bearing it out. Fourth-quarter net revenue was 2.2 billion yuan ($328 million), up 40.7% from last year. Of this total, services revenue increased 56.7% to 1.78 billion yuan, while revenue from product sales increased "only" 24.6% to 975.4 million yuan.

Income from operations was up 30.8% year over year, while operating margin compressed slightly from 11.2% to 10.4%. Net income was 188.2 million yuan, up 28.4% from last year, while non-GAAP net income per diluted American depositary share (the stock U.S. investors buy on the Nasdaq) was $0.50, 27% higher than last year's fourth quarter.

CEO Vincent Qiu pointed out that Baozun's efforts to offer a complete solution to merchants of all sizes are paying off. As he said on the earnings call: "We continue to expand the number of brand partners we work with, which grew rapidly for 185 as of the end of fourth quarter, an increase from 152 during the same period last year. The newly added brands are primarily in apparel, cosmetics, and [fast-moving consumer goods] categories, and they include an American lifestyle brand, a global jewelry brand, and a global casual clothing and accessory retailer."

Check out the latest earnings call transcript for Baozun.

As noted above, revenue is growing at a much higher rate than operating income and earnings, while operating margin is actually shrinking. Ideally, one would want to see Baozun's profits grow at a faster pace than revenue, as increased scale generates operating leverage, making each incremental dollar it gets more profitable.

Qiu continues to stress the crucial importance of Baozun's accelerated spending to capture as much of the burgeoning e-commerce market as it can at this pivotal phase of China's transition from physical stores to web commerce. He pointed out that Baozun's growth isn't just from pure-play web merchants, but also from its ability to deliver full, end-to-end solutions for retailers across the spectrum, particularly large retailers and brands looking to maintain both physical and e-commerce presences.

"The growing array of exclusive end-to-end solutions we have on offer and our omnichannel capabilities were again critical this year in driving growth during the fourth quarter," Qiu said. "Total net revenues were 2.2 billion [yuan] during the quarter, an increase of 41% year over year, which is the highest growth rate we've experienced over the past three years."

Simply put, Baozun's aggressive spending in prior quarters laid the groundwork for its success in landing partnerships with so many major brands, and developing a pipeline of new potential partners that Qiu described as having "never been stronger."

Looking ahead: China's growth is slowing, but e-commerce is accelerating

Much ink (literally and virtually) has been spilled over the past couple of years describing how China's economic growth is beginning to slow. Estimates call for China's GDP to grow between 6% and 6.5% in 2019, versus last year's 6.5%, and the country's weakest economic-output increase in almost three decades.

However, Qiu said that "...growth in the e-commerce sector remains strong as the emerging base of increasingly affluent middle-class Chinese continues to drive consumption growth." He went on to say that he expects "...the e-commerce industry and the digitization of retail industry will continue to grow at a faster pace than the overall economy, which we are ideally positioned to benefit from."

For the first quarter of 2019, management expects total net revenue of 1.25 billion to 1.3 billion yuan. That's versus 921.2 million yuan year over year, representing 38% growth at the midpoint of guidance. Services revenue is expected to continue growing more quickly, with a target of 45% growth.

Even with China's economic growth starting to moderate, a burgeoning consumer middle class is set to provide e-commerce leaders like Baozun with a multiyear tailwind. The company seems likely to continue increasing spending at a fast pace in order to capture as much of the market as it can. It's certainly paid off so far.

Why Baozun Stock Was Gaining Today
411%