Audi's e-tron Q4 Concept is aimed squarely at the upcoming new Tesla -- and it looks good.

Audi AG (AUDVF) took the wraps off its latest electric model at the Geneva Motor Show on Tuesday. The Audi e-tron Q4 Concept is a preview of a compact all-electric crossover SUV that the company expects to put into production next year.

This could be a big deal. By showing the Q4 Concept now, Audi establishes a baseline that the 800-pound gorilla of electric-car mindshare, Tesla (TSLA 4.53%), will have to match or beat when it presents its Model Y compact crossover later this month. 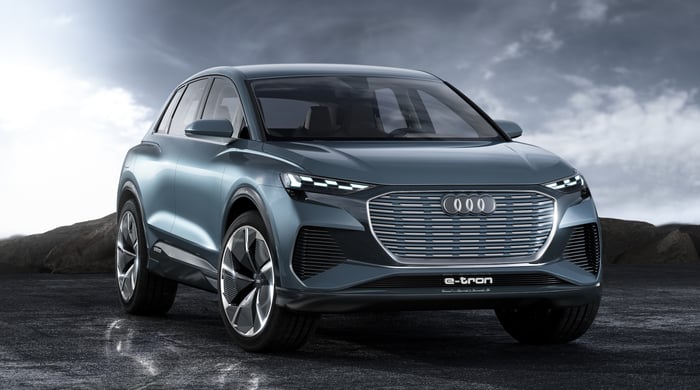 What it is: An upscale electric crossover SUV

If you know your Audis, you might have guessed from its name that the e-tron Q4 Concept is a two-row electric crossover SUV one size down from Audi's first premium electric SUV, the e-tron.

It's a dual-motor all-wheel-drive design with an 82 kilowatt-hour battery pack that seems to be optimized for range rather than "ludicrous" acceleration. Audi said the e-tron Q4 Concept will accelerate from 0 to 100 kilometers per hour (62 miles per hour) in 6.3 seconds -- reasonably quick, but not Tesla-quick. But it will have a rated range of over 450 kilometers (about 280 miles) on the new, strict WLTP European test standard, the company said. 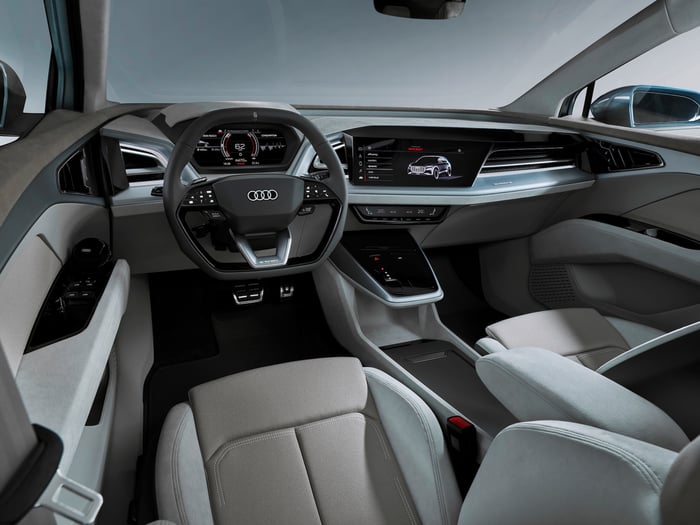 The e-tron Q4 Concept's interior is high-tech and new, but it's typical Audi -- among the world's best -- in its material quality and fit and finish. Somehow, Audi manages to make it work without a giant touchscreen stuck to the dash. Image source: Audi AG.

Inside, the vehicle's long wheelbase (and the flat floor that its electric drivetrain allows) gives it more space than its exterior dimensions would suggest. In what is becoming a trend with electric vehicles, Audi selected sustainable materials for the e-tron Q4 Concept's interior: Painted trim rather than chrome, recycled materials in the carpet, and seats upholstered in Alcantara (a suede-like microfiber fabric) instead of leather.

Interestingly, it doesn't share the bigger e-tron's underpinnings. Instead, it'll be the first Audi to be built on corporate parent Volkswagen AG's (VWAGY 2.75%) MEB architecture, a modular set of components designed to be shared widely among the company's electric vehicles in an effort to reduce costs and time to market. That should make the production version more profitable for Audi, more cost-competitive, or both.

Audi said that it will launch the production version of the e-tron Q4 in the second half of 2020. 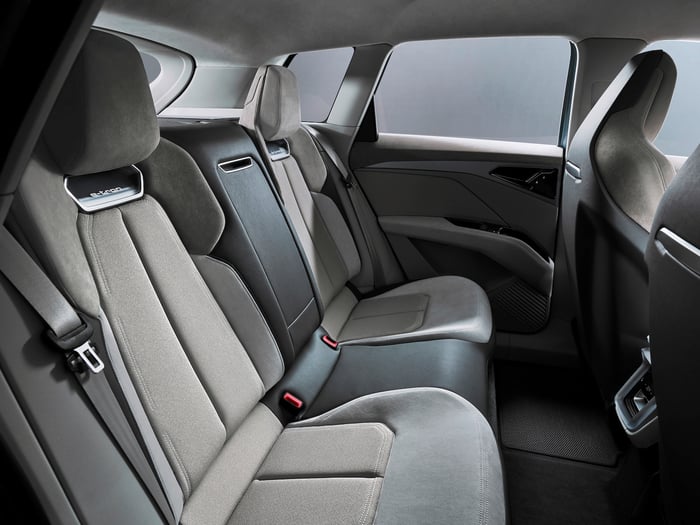 Why it's important: Audi is tackling Tesla head-on

Sorry, Tesla fans, this isn't vaporware. Believe it or not, the production version of the Q4 e-tron Concept will be Audi's fifth battery-electric model when it arrives in 2020. It'll follow the original e-tron crossover SUV (first deliveries later this month), the e-tron Sportback (due later this year), a smaller crossover called the e-tron Q2L that was designed specifically for China (also due later this year), and the high-performance e-tron GT sports sedan (due in 2020). By 2025, Audi plans to have 12 all-electric models in production covering "every relevant market segment from the compact class to the luxury class." It expects that electric models will account for about a third of its global sales by that time. 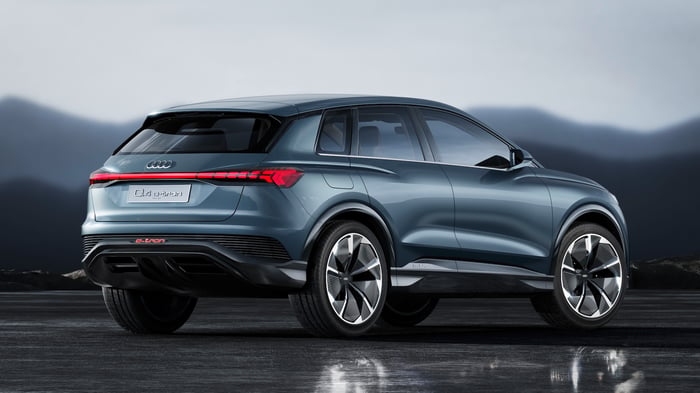 Of more immediate import, Audi has now thrown a gauntlet. This is a close preview of the vehicle it will use to challenge Tesla's Model Y, starting late next year. Tesla might have its small crossover SUV in production sooner, but potential Model Y buyers now know that Audi will have something in the same class -- something with a nice interior and a dealer network that can get parts in days rather than months, something that will be fully tested prior to launch -- before long.

Who's disrupting who? We'll see.