Kroger (NYSE:KR) just wrapped up 2018, reporting its fourth-quarter results on Thursday morning. While the quarter was a disappointment when compared to analysts' estimates, investors shouldn't overlook some notable progress the company made during 2018.

Last year was a critical year for Kroger -- one in which the company ramped up investment on its first full year of a three-year transformation plan called Restock Kroger. The plan, which is expected to generate $400 million in incremental operating profit and $6.5 billion in free cash flow over the three-year period beginning in 2018 and ending in 2020, represents the company's efforts to transform its business to thrive in an evolving retail landscape.

In 2018, Kroger managed to invest aggressively while growing its business and posting earnings per share at the high end of its full-year outlook. 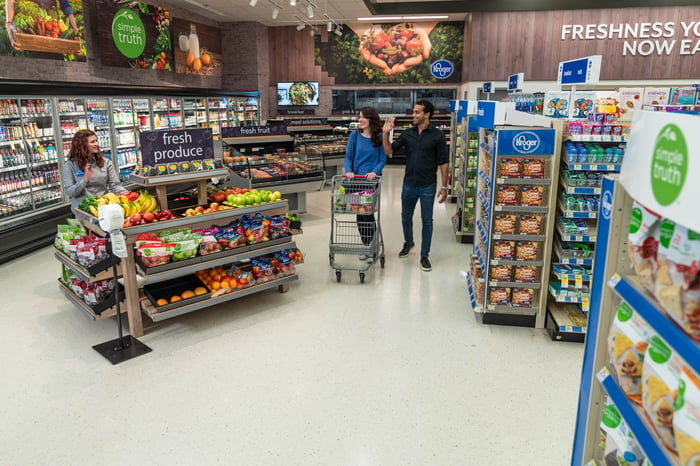 Notably, though, Kroger changed the way it measures same-store sales in the first quarter of 2018. The company changed the metric to be "more inclusive of company business units -- including Kroger Specialty Pharmacy and ship-to-home solutions," management said in its first-quarter earnings release. So, the supermarket company's 2017 and 2018 same-store sales metrics aren't perfect comparisons.

Kroger's 2018 sales decreased 1.2% to $121.2 billion. But when excluding fuel, an extra week in 2017, the company's convenience store business unit divestiture, and the impact of a merger with meal-kit company Home Chef, total sales during the year were up 2%. This is slightly lower than the company's adjusted sales growth of 2.2% in 2017.

In its fourth-quarter and full-year update, management said about its profitability:

For fiscal 2018, Kroger's adjusted net earnings per diluted share result was slightly ahead of the company's internal expectations due to results from the solid early execution of Restock Kroger, including process changes that led to sustainable cost controls and higher-margin alternative profit streams. This performance allowed Kroger to continue making incremental Restock Kroger investments while delivering on its guidance range for the year.

As part of the company's Restock Kroger initiative, management wants to empower customers to "buy anything, anytime, anywhere from Kroger," the company said in an October 2018 update on the three-year transformation plan. As part of this effort, management expects its annual digital sales run rate of more than $5 billion at the end of 2018 to rise to $9 billion by the end of 2019.

Given the company's strong growth in digital sales recently, this target looks achievable. Digital sales were up 58% year over year in 2018 -- and that's on top of 90% growth in 2017. In addition, this is significantly faster growth than the 40% year-over-year growth in U.S. e-commerce sales that Walmart (NYSE:WMT) saw in its recently ended fiscal 2019.

While Kroger's transformation plan showed some signs of progress in 2018, the next two years will show whether the initiative can make a meaningful difference. Management said in its fourth-quarter earnings release that 2018 was ultimately "an investment year that laid the groundwork for us to achieve our 2020 Restock Kroger targets including financials."