In the past several months, it seems the warm and friendly relationship between Disney (NYSE:DIS) and Netflix (NASDAQ:NFLX) has gotten a bit chilly. The partnership that produced a number of fan-favorite Marvel series that have appeared on Netflix since 2015 has reached the end of the line.

Netflix announced that the last remaining shows wouldn't be renewed, leaving fans of Marvel's Defenders series wondering what will become of the heroes of Harlem and Hell's Kitchen. Let's take a look back and see what both Netflix and Disney are saying about the future of some of New York's greatest heroes. 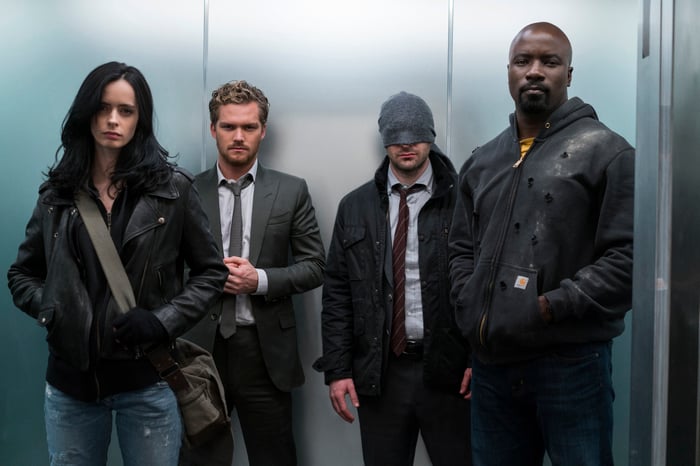 Iron Fist was the first of the Marvel/Netflix shows to be canceled. The first season was panned by critics and fans alike, and while the second season was an improvement, the program was widely regarded as the weakest of the series. This move also effectively ended The Defenders, the team-up show consisting of all four superheroes. Luke Cage was the next to get the ax.

The biggest surprise came with the cancellation of Daredevil, shortly after the release of the third season. It was particularly noteworthy in light of the critical praise and fan reception it received, including a 97% "Fresh" rating on review aggregation site Rotten Tomatoes. Shortly after Daredevil's ouster, the news broke that the two remaining shows, Jessica Jones and spinoff The Punisher, would not be renewed after their third and second seasons, respectively.

The original deal between Netflix and Disney reportedly contained a clause that prevented any of the characters subject to the deal from appearing in any non-Netflix series or film for at least two years after cancellation, according to Variety.

Netflix's chief content officer, Ted Sarandos, seemed to confirm the company's control of the content. In an interview late last year, Sarandos was asked about the future of the Marvel shows on Netflix. "Those shows are for us to cancel," he said, "and we're super happy with their performance so far."

However, in a statement concerning the cancellation of Daredevil, Netflix said, "While the series on Netflix has ended, the three existing seasons will remain on the service for years to come, while the Daredevil character will live on in future projects for Marvel." This seems to indicate that some kind of amicable agreement may have been reached between the two companies regarding Daredevil's future. To further complicate matters, The Hollywood Reporter asked Kevin Mayer, who heads Disney's direct-to-consumer and international segment, whether the company would consider reviving the Marvel show that Netflix canceled. Mayer responded: "They are very high-quality shows. We haven't yet discussed that, but I would say that's a possibility."

Finally, Marvel Television's Jeph Loeb posted an open letter to fans of the shows on Marvel's website. In part, Loeb said: "Our Network partner [Netflix] may have decided they no longer want to continue telling the tales of these great characters ... but you know Marvel better than that ... To be continued...!" The letter was signed "Jeph Loeb and all of us at Marvel Television."

We may only be weeks, or potentially months, away from the completion of Disney's acquisition of the television and film studios of Twenty-First Century Fox (NASDAQ:FOX) (NASDAQ:FOXA). With the closing of that deal comes a controlling stake in Hulu, which will be part of Disney's trifecta of streaming services, with Disney+ and ESPN+ rounding out the three. With competition from Hulu set to ratchet up and the debut of Disney+ just months away, there were bound to be tensions between Netflix and the House of Mouse. This may be part of the reason Netflix canceled the Marvel shows.

Disney has a high hurdle to clear, as Netflix currently boasts about 139 million subscribers. Disney CEO Bob Iger revealed during the company's first-quarter conference call that ESPN+ reached 2 million subscribers, less than five months after announcing 1 million back in September. Hulu announced that it topped 25 million subs to end 2018. Disney+ is scheduled to launch by year's end.

With so many conflicting reports -- and given the growing competition between the two -- Disney might yet give new life to these Marvel characters, but given the circumstances, I would be surprised if it happens anytime soon.