Please ensure Javascript is enabled for purposes of website accessibility
Log In Help Join The Motley Fool
Free Article Join Over 1 Million Premium Members And Get More In-Depth Stock Guidance and Research
By Daniel B. Kline - Updated Apr 11, 2019 at 9:03PM

The iconic doll has seen its sales surge.

Just a few years ago, Mattel's (MAT -0.02%) Barbie brand was in trouble. It had lost relevance to the young girls that make up its core customer base, and it looked likely to be eclipsed by hipper brands more in-line with current consumer taste.

Those struggles led to the company bringing back former president and COO Richard Dickson. When he returned to the company in 2014 after leaving in 2010, Dickson was charged with revitalizing the company's core brands. Perhaps the most important property on that list was Barbie, a now 60-year-old icon that was showing signs of its age. 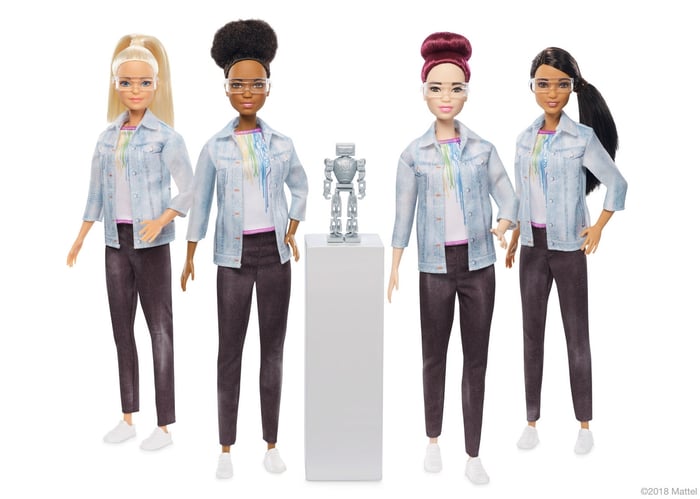 The new Barbie is meant to beinspiringg. Image source: Mattel.

Mattel's COO answered questions about how he was working to revitalize the Barbie brand during a keynote address at Shoptalk 2019. The 11 1/2 inch plastic doll was revolutionary in its day, but plastic dolls don't command the same level of interest from kids as they did in the 60s, 70s, and 80s.

"Today, most kids play digitally before they're even introduced to a fashion doll," he said.

That makes it a challenge to keep a brand relevant. Barbie was not just saddled with being a form of play that had somewhat fallen out of favor; the portrayal of the character was no longer as inspiring as it had been created to be.

"A few years ago the headlines for Barbie, as most of you know, were pretty horrific," Dickson said. "In fact, there were lots of questions as to whether the brand could continue to be relevant."

Dickson used a simple approach to revitalize the iconic toy, which seemed painfully out of touch with the current market: He reached out to the brand's customers.

"We asked people, 'what do you think of Barbie?" he said. "And what came back to us was really shocking and uncomfortable. She wasn't relevant. She didn't look relevant...her body image was arguably unattainable and she wasn't an inspiration as the original founder intended her to be."

After listening, Dickson and the Mattel team made substantive changes. The company undertook what the COO called "a whole new course of action." That included launching Barbie figures in 26 new ethnicities and changing the character's body to better reflect reality, a move the COO called "an epic cultural phenomenon that was recognized all around the world including on the cover of Time magazine.

The company also built up a culture that goes beyond the toy line, including a program called "Sheroes" honoring and celebrating women of achievement. Now the company has launched a program to address the "Dream Gap," the fact that at age 5 "girls don't believe they have the same potential as boys."

Check out the latest earnings call transcript for Mattel.

When a company owns a legacy brand like Barbie, it can be hard to make changes -- especially when the status quo worked for multiple decades. Mattel, however, showed that it was possible to respect what the character was while bringing it into the present day.

It's fair to say Mattel has solved its Barbie problem. Gross sales for the brand rose by 14% in 2018, a year in which the overall company saw sales fall by 4% overall due to the bankruptcy of Toys R Us.

Mattel could have clung to a dwindling business model and still done well. Barbie, even as it struggled, was still a major brand, and it may have been tempting to make tweaks rather than major changes. Instead the company tapped into the underlying fondness for the brand and updated it for the modern world.