From its strong quarterly results to its impressive 2019 guidance, the programmatic ad leader is understandably trading near all-time highs.

The stock roared 31.3% higher on Feb. 22, 2019, alone, the first trading day after The Trade Desk's report hit the wires. In that report, the company confirmed its quarterly revenue had soared 56% year over year to $160.5 million -- accelerating from 49.6% a quarter earlier and far above the 43% growth management had predicted -- while adjusted earnings more than doubled over the same period to $51.1 million, or $1.09 per share. 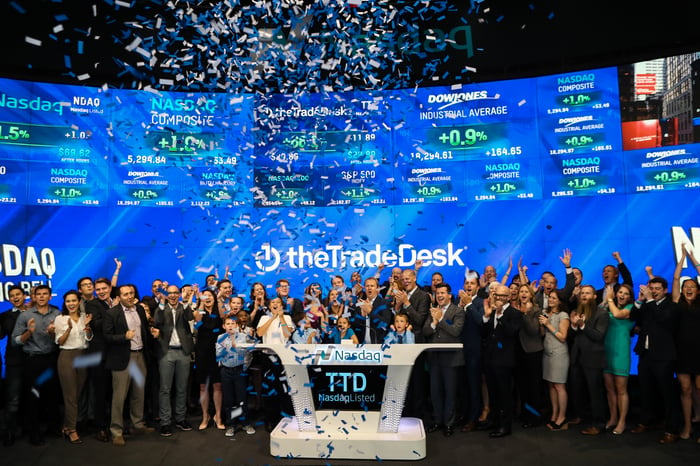 The Trade Desk founder and CEO Jeff Green called 2018 "huge" and a "foundational year" for the company, adding:

We launched the biggest product, called the Next Wave, in our history; Connected TV became a must-have on the media plan; we partnered with some of the largest internet companies in China; data usage on our platform accelerated; and our Unified ID initiative gained steam across the industry. Our vision is to change the way advertising is bought by enabling programmatic, data-driven decisions and 2018 marked another year of great strides toward that goal.

Check out the latest earnings call transcript for The Trade Desk.

Looking to the full year of 2019, The Trade Desk told investors to expect revenue of "at least $637 million" -- again well above consensus estimates at the time for 2019 revenue of $617 million -- starting with $116 million in sales for the first quarter.

In the end, following this straightforward quarterly beat with an equally impressive financial outlook gave the market more than enough reason to drive The Trade Desk stock to fresh all-time highs. And if the company extends its habit of underpromising and overdelivering going forward, I suspect there will be plenty more gains in store from here.