Walt Disney (NYSE:DIS) stunned theme park enthusiasts at Thursday's shareholder meeting, announcing that Star Wars: Galaxy's Edge will open a lot earlier than folks were expecting. The first phase of Disney World's version will open on Aug. 29, well ahead of the "late fall" debut that the media giant was originally touting.

The move doesn't necessarily rattle the plans for springtime openings for new rides and attractions at nearby theme parks. Comcast's (NASDAQ:CMCSA) Universal Orlando, SeaWorld Entertainment's (NYSE:SEAS) SeaWorld Orlando, and Legoland Florida will still have months to enjoy what should be another year of record crowds in central Florida before Disney begins siphoning off potential visitors to rival parks. The world's largest theme park resort will still miss the peak summer travel season. However, it does shake things up a bit, and all eyes are now on how 2019 will play out in the high-stakes game of Florida's theme parks. 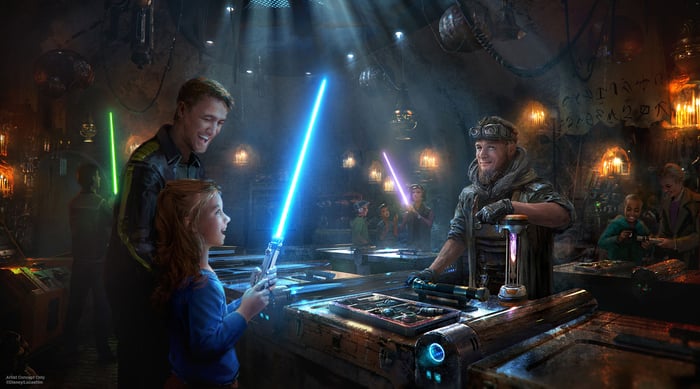 The chess pieces will start moving later this month, with young families getting the first taste of the state's new attractions. Legoland Florida will still roll out Lego Movie World on March 27, the same day that SeaWorld Orlando will introduce the Sesame Street makeover of its formerly marine-life-themed, kid-friendly area.

The baton then gets passed to the two new coasters coming to town. SeaWorld Entertainment's Busch Gardens Tampa will debut Tigris -- billed as Florida's tallest launch coaster -- at a yet-to-be-announced springtime date. Comcast's Universal Orlando will go back to the Harry Potter well when it introduces Hagrid's Magical Creatures Motorbike Adventure on June 13. Comcast has a media event planned for Tuesday, when it will release more information on the new highly themed family coaster.

Disney World isn't phoning it in, but outside of new parades and shows, it will be riding mostly on the lingering buzz from Toy Story Land that opened in June of last year. It's going to be a challenge for Disney World to keep visitors from straying to check out rival attractions until it whips out its lightsabers in late August, and even then the decision to open the new land in phases could find some potential visitors holding back until all of the Star Wars-themed additions are in place later this year.

The decision to open in phases -- without the new land's most ambitious ride -- could actually prove beneficial to all of the industry players. Die-hard fans will come shortly after the first phase opens, and perhaps spend some time at rival parks to see the rides and lands that will debut later this year. Central Florida will also get a second wave of visitors when Rise of the Resistance opens weeks or months later.

It's going to be a wild year in central Florida. The shiny new experiences kick off later this month, but the real fireworks will be flying later in 2019.