It's a cheap stock with interesting long-term growth potential.

The deal ultimately fell through, however, when Chinese regulators didn't approve the takeover in time. As a result, Qualcomm was forced to pay a $2 billion breakup fee to NXP Semiconductors.

Check out the latest earnings call transcript for NXP Semiconductors. 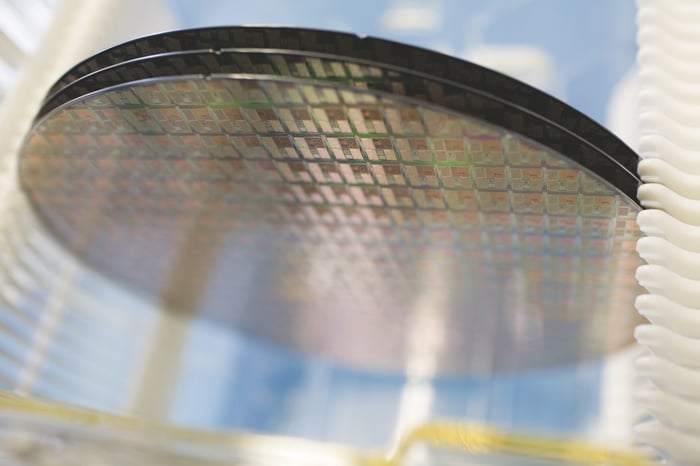 As of this writing, NXP Semiconductors trades at just over $93 per share -- a significant discount to what Qualcomm was willing to pay in a bid to grow its total addressable market and bolster its financial performance.

NXP Semiconductors splits its business into four key end markets. The largest of the bunch is automotive, which made up 48% of its revenue in 2018. Not only is this segment large, but the company is also expecting it to deliver significant growth. NXP Semiconductors' medium-term outlook calls for a three-year revenue compound annual growth rate (CAGR) of between 7% and 10% for this end market. That would outpace the 5% to 7% revenue CAGR that management expects for the industry as a whole.

Next up is the company's industrial and Internet of Things (IoT) business. Although investor enthusiasm for IoT seems to have cooled in recent years, NXP is banking on this segment -- which made up 19% of its 2018 sales -- to deliver between an 8% and 11% CAGR over the next three years. The company is planning to dramatically outgrow the market, which will expand at a 3% to 5% CAGR during that time frame, according to NXP's management.

Tied with the previous segment is the company's communications infrastructure and other segment. This, too, made up 19% of the company's revenue in 2018, but NXP management seems less sanguine about this segment's growth opportunities, calling for segment sales to inch higher at a 0% to 2% CAGR over the next three years. That, discouragingly, is below the 3% to 5% industry revenue CAGR that the company expects. (Clearly, this segment isn't a bright spot for NXP Semiconductors.)

Finally, there's mobile. This is the smallest contributor to the company's revenue, making up just 12% of NXP Semiconductors' revenue in 2019. This segment, per the company, is set to experience a 4% to 6% revenue CAGR over the next three years, which is roughly in line with the 4% to 7% CAGR that management expects for the broader industry.

Overall, NXP Semiconductors thinks its revenue will rise at a 5% to 7% CAGR over the next three years. This doesn't represent an eye-popping amount of growth, but if the company can pull it off, it'll certainly be respectable.

Respectable growth at a low price

If NXP Semiconductors stock were richly priced, then a 5% to 7% revenue CAGR simply wouldn't cut it. However, at current levels, the stock looks quite cheap.

NXP Semiconductors brought in $7.12 in earnings per share during 2018. Based on that figure, the shares are trading at around 13 times what the company earned last year.

That's not terribly expensive to begin with, but what's even more interesting is that analysts expect the company's EPS to climb to $7.59 in 2019, followed by a surge to $9 in 2020. While those are just estimates -- actual results could come in above or below those projections -- they look reasonable to me.

Based on those estimates, NXP Semiconductors stock is trading at a little over 10 times its projected 2020 EPS, which makes it look like a downright bargain.

If you're looking to invest in a high-quality chip company with broad exposure to a number of interesting markets (with an emphasis on the automotive chip market) and you want to pay a reasonable price for solid growth prospects, then NXP Semiconductors stock certainly belongs on your watch list.