Same-store restaurant sales in the U.S. dipped less than 1% in February and broke an eight-month streak of positive growth, according to research firm TDn2K. That dip was disappointing, but many restaurant stocks remain reliable investments in this volatile market. 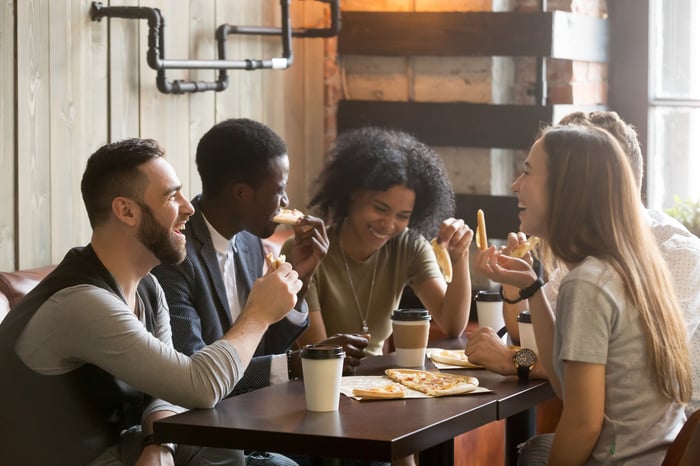 A resilient portfolio of dining chains

Darden once struggled with waning interest in casual-dining chains, but activist hedge fund Starboard Value engineered a turnaround over the past two years after persuading investors to replace Darden's entire board with its own picks. Darden's management then reduced discounting at its brands, especially at Olive Garden, and also upgraded its entrees and reversed the prior management's wasteful spending practices.

Those efforts paid off, as Olive Garden, LongHorn, Capital Grille, and Eddie V posted positive comps growth last and offset declines at its other four brands last quarter. Its total same-store sales rose 2.1% as its total sales climbed 4.9%. It expects its full-year comps to rise 2.5%.

CEO Gene Lee stated that Darden posted "another quarter of strong and steady performance by continuing to focus on being brilliant with the basics in our restaurants." Lee also noted that Darden continued to "grow market share profitably by strengthening and leveraging our competitive advantages, and our brands are making the appropriate investments while managing costs effectively."

Analysts expect Darden's revenue and earnings to rise 5% and 18%, respectively, this year. Those are solid growth rates for a stock that trades at 17 times forward earnings, and Darden pays a decent forward dividend yield of 2.7%.

Darden will report its third-quarter earnings on March 21, and investors should see whether adverse weather conditions affected its turnaround plans. If not, this could be a great long-term investment at these levels.

Check out the latest earnings call transcripts for Darden Restaurants, Wingstop, and Starbucks.

Jamal Carnette, CFA (Wingstop): It's been a slow start to the year for this fast-casual wing chain, with shares up 1% as of this writing versus the S&P 500's double-digit return. That's perhaps to be expected, after the stock climbed more than 80% in 2018. But despite the recent stock underperformance, Wingstop continues to have a long runway for growth. 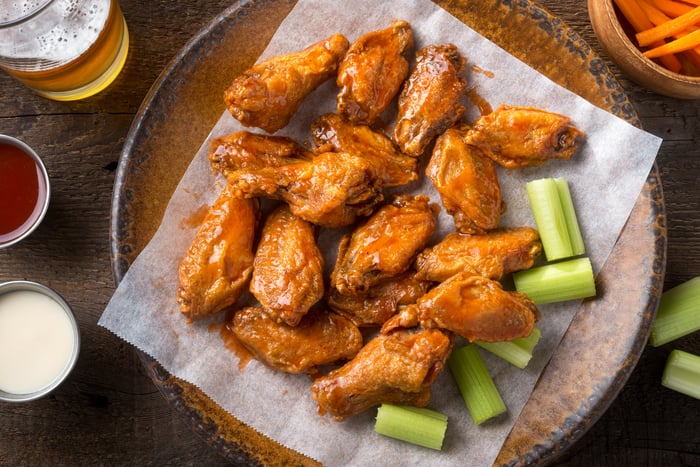 The bearish case against Wingstop is that it's an expensive stock by traditional metrics. The forward P/E ratio is approximately 70,versus 17 for the greater S&P 500. However, the company continues to exhibit rapid growth. In 2018, Wingstop posted 6.5% same-store-sales growth, an increase from 2.6% from the year prior, and grew total revenue 15%. More importantly, same-store sales increased year over year, pointing to more brand awareness and more return customers the longer a store location is in operation.

Wingstop's growing debt load has given investors a minor case of heartburn, especially as the company used a significant amount of debt to pay a special dividend. While I share these concerns, CFO Michael Skipworth noted during the fourth-quarter conference call that the company was committed to de-levering in the years ahead.

While I'll continue to watch Wingstop's balance sheet closely, the company's strong performance affords management the benefit of the doubt. I'm putting Wingstop on my menu.

Demitri Kalogeropoulos (Starbucks): They say it takes at least three confirming data points to demonstrate a changing trend, and Starbucks is right on the cusp of a positive result. The coffee titan in late January announced solid sales growth for its fiscal first quarter, with revenue up 4% at existing locations in the U.S. and globally. The gains marked an acceleration over the encouraging 3% uptick the company achieved in the prior quarter, following a painful period of sluggish results.

It's true that Starbucks isn't firing on all cylinders these days. Customer traffic levels were flat in the U.S. last quarter and fell 2% in the key Chinese market. But the company's operating trends are improving, and the restaurant chain is putting further distance between itself and rivals such as Dunkin' Brands (DNKN), which announced flat sales over the holiday quarter despite having rolled out a new espresso-based beverage platform.

It's still early in the fiscal year, but the company appears to be on track to post its first sales acceleration in four years. That success should give investors more confidence that Starbucks' management team has a good grasp on the challenges the company is facing and the growth levers it can pull.