The global coffee giant delivered the goods on growth and took steps in its big venture with Nestle, but there's one thing investors should continue watching closely.

This was a likely refrain from many Starbucks Corporation (SBUX -2.67%) investors following the release of its fourth fiscal quarter 2018 earnings report after market close on Nov. 1. The company reported 11% sales growth, 13% adjusted earnings per share, and 3% global growth in same-store sales. Maybe most importantly for many people was the company's strong 4% comps result in the U.S., the company's biggest and most profitable market, and by far its best comps result there in more than one year.

Starbucks also saw its Chinese stores bounce back after a somewhat underwhelming quarter, and made big progress in its new venture with global partner Nestle, to put more Starbucks products in more consumer's hands around the world. But there are also a handful of things that didn't exactly improve in the quarter that investors should continue monitoring, including another quarter of falling transactions and higher expenses taking a bite out of its operating margin and income. 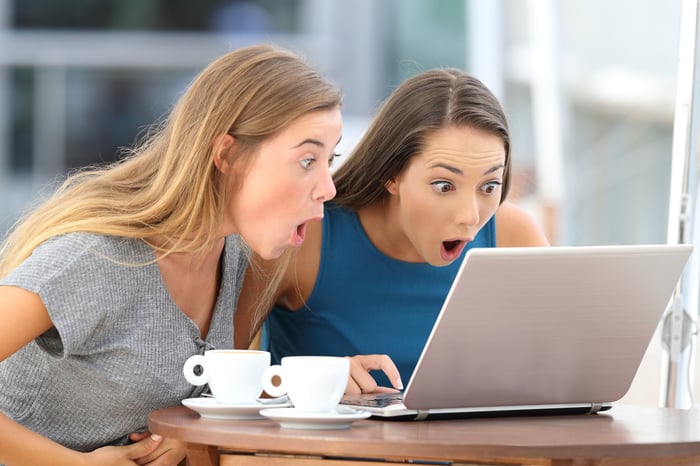 The expression shared by many Starbucks shareholders this morning. Image source: Getty Images.

Strong comps growth was a positive, but the traffic trend continues to be underwhelming

Starbucks investors have every right to cheer after the company's bounce-back comps result in the fourth quarter. This includes strong 4% growth in the U.S., which remains the company's biggest and most-profitable market, as well as the return to growth in China, after third fiscal quarter comps fell 2% due to a combination of competitive pricing, challenges with delivery, and cannibalization of sales by newly opened Starbucks stores.

This is where I'll stop lauding praise on the comps result, and point out the gorilla in the earnings release: traffic. For yet another quarter, the company reported a decline in transactions. Management has said that was partly due to the change made last year to the Starbucks Rewards program, which seems to have created incentive for combining orders. But at this point, the company should soon be "lapping" those changes, and if the transaction count continues to fall that's a very concerning trend.

Brewer pointed out that there are some positive traffic trends, and the company's investments in going where customers want to be is paying off (emphasis mine):

We continue to grow transactions at peak (day-part) and we showed modest improvement in the afternoon day-part. This resulted in improved one-year and two-year transaction comp in the quarter. At the same time, we continue to balance community and our commitment to the third place while serving the growing demand for convenience. Last quarter our stores with drive-thru well outperformed our cafe comp. And from a US portfolio strategy, more than 80% of our new stores in FY '18 were drive-thru, and this format will be a continued focus into FY '19. Additionally, drive-thru, out-the-window and Mobile Order and Pay combined grew to more than 50% of the way customers are ordering, up more than 10 percentage points in just two years.

As we head into fiscal year 2019, Starbucks' comp base will start to reflect more stores with drive-through, as well as the roll-out of delivery and mobile order & pay to more stores, and personalized offers to non-rewards member customers. With so many initiatives set to attract more customers, and to make the Starbucks experience even more convenient, there's reason to be optimistic about the traffic trend.

For years, Starbucks was incredibly good at generating steady operating leverage, by taking 10% sales growth and turning it into 20% earnings-per-share growth. However, the company hasn't been able to deliver the same goods in recent quarters. As noted above, sales increased 11% in the fourth quarter, but adjusted earnings were up only 13% and GAAP earnings per share increased only 4%.

The big declines are the result of some "good" things and some challenges.

One of the biggest reasons for the declines is tied to the company's shift in strategy in China. Starbucks took over operations from its joint venture partner in mainland China at the beginning of fiscal year 2018, transitioning the entire market from a licensee to company-operated. Licensed stores generate substantially higher operating margins, and by bringing all of the store operating expenses in-house, Starbucks' China/Asia Pacific segment reported a massive decline in operating margin from 23.5% to 19.1%. Similarly, higher employee-related expenses in the U.S., along with the increase in the mix of food sales (which are lower-margin than beverages) pushed operating margin from 22.9% to 21.8% in the Americas segment.

A shift to a consolidated model in China is better because even though operating margins are lower, the potential income is much bigger as compared to a small licensing fee. For example, operating income from the China/Asia Pacific segment was up 15% in the quarter to $232 million, even though the operating margin fell substantially.

Management is taking actions to drive sales and improve profits

Many of the initiatives above aimed at helping grow traffic and comps would also improve the bottom line and operating results. But they are only part of what the company is working on. Last quarter, the company announced plans to make its stores more efficient, using automation and AI to remove about half of the administrative tasks from store employees. And this isn't just some plan to drive down store labor expense.

Management says the real goal is to free up two to three hours each day that can be reallocated to customer-facing time. This should result in improved sales, higher throughput, and a better Starbucks experience. And while the company plans to take most of 2019 to roll out these changes, Brewer said they've already made substantial progress, regaining about 1 1/2 hours per day in certain stores by redeploying and automating certain tasks.

Starbucks also continues to invest in "beverage innovation," developing new menu items and rolling the most successful ones out to more stores. Over time, these actions should help offset changes in tastes or seasonal weakness, such as what we saw last quarter when Frappuccino sales caused a big part of the weak U.S. comp result.

Looking ahead: Moving from a transitional year to one of action

Fiscal year 2018 was a transitional period for Starbucks in a multitude of ways. Long-time CEO and chairman Howard Schultz has largely stepped away from the business for the first time since taking it over decades ago, while longtime CFO Scott Maw will retire in November. The company made the bold move to take full operational control of its China stores this year, while closing its Teavana retail operation, selling its Tazo tea brand, and also shifting operational control of its consumer packaged goods to Nestle in a $7 billion-plus deal.

That's a lot of change in a single year.

At the same time, management has steadily invested in digital capabilities to improve the store experience and make it more convenient for more people to spend money at Starbucks, and 2019 should be the year when those efforts start to pay off. Oh, one more thing: Starbucks also announced a massive $25 billion capital return program, comprised of both dividends and share repurchases, over the next several years.

At this writing, shares are on track to close at their all-time high, and will probably be very close to that when you read this, having gained about 9% following the earnings announcement.

In other words, Mr. Market seems to have come full-circle on Starbucks, and once again has high expectations for its prospects. All that's left is for management to deliver.