These companies are leading the e-commerce charge.

To help investors track down some top e-commerce stocks to buy right now, we asked three Motley Fool contributors for their recommendations. They came back with MercadoLibre (MELI 5.12%), Etsy (ETSY -0.97%), and Shopify (SHOP 2.11%). Here's why. 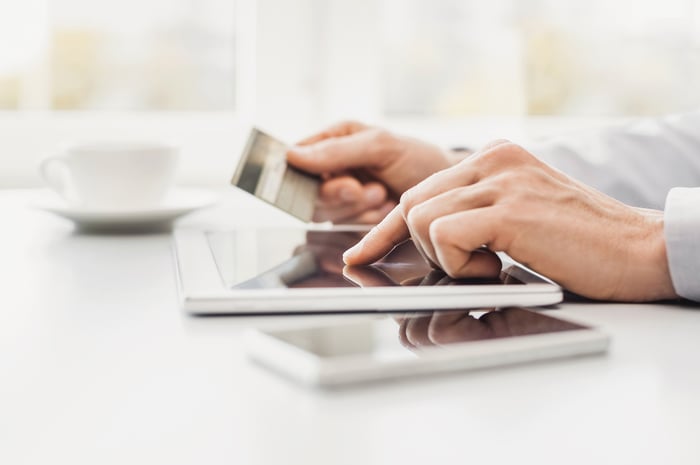 Anders Bylund (MercadoLibre): Online shopping portals are popping up on every continent. By investing in Latin America's largest e-commerce player, MercadoLibre, you can tap into the economic rebound that's going on in many South and Central American countries right now.

Markets like Honduras and Bolivia are absolutely crushing it nowadays, posting gross domestic product growth above 4% per year while we Yankees have to settle for 2%. At the same time, e-commerce is just getting started in this region. Online sales are expected to grow at an annual clip of 19% over the next five years, far ahead of the global average near 11%. Only 60% of Latin American populations have internet access today, but that ratio is growing quickly. And among the early e-commerce adopters, MercadoLibre stands head and shoulders above the competition with a nearly 50% market share.

On top of that massive market opportunity, MercadoLibre itself is evolving. Its online shopping portal is getting serious help from a healthy online payment system, a flexible shipping service, and more. This is an e-commerce play for the long run, boosted in the short term by the springboard effect of maturing economies across Latin America. The road ahead may be bumpy due to political unrest and lumpy growth in some spots, but MercadoLibre looks like a great investment for the long haul.

Check out the latest earnings call transcripts for MercadoLibre, Etsy, and Shopify.

Steve Symington (Etsy): With the world increasingly shifting toward a plethora of big-name stores and mass-produced goods, it might seem surprising that one of the e-commerce industry's most attractive investments has carved out a niche by embracing vintage and handmade items. But Etsy has done exactly that, capping 2018 with seven straight quarters of accelerating top-line growth -- and the stock is up more than 180% over the past year to trade at 70 times this year's expected earnings as a result.

But Etsy has also demonstrated a habit of underpromising and overdelivering. So if that guidance proves to be conservative -- particularly if Etsy's profit margins expand as its outlook suggests -- I think Etsy can easily grow into its lofty valuation when all is said and done in 2019.

Chris Neiger (Shopify): Businesses of all sizes are still trying to figure out how to build their online sales. Luckily for them, Shopify makes it simple. Shopify's platform helps companies set up online shops to both sell and track their e-commerce business, and to date, it has more than 800,000 businesses using its services.

The company's revenue jumped 54% in the most recent quarter to $343.9 million. That growth was driven by Shopify's key revenue segments -- subscriptions solutions and merchants solutions -- and sales in those categories increased by 42% and 63% year over year, respectively.

Not only are merchants flocking to Shopify, but the amount of money being spent through the company's platform is skyrocketing as well. The company's gross merchandise volume (GMV) -- the total dollar value of orders made on the platform -- was up 54% in the fourth quarter to $14 billion.

One of the great things about Shopify is that the company is pursuing other avenues outside of its core platform services to make money as well. Shopify Capital, which lends money to merchants, issued $71.8 million in advances in the most recent quarter, up 81% from the year-ago quarter.

Shopify's share price is up about 27% over the past year, and investors should know that the company's stock still remains pretty volatile right now. But as the e-commerce industry continues to grow, Shopify will likely benefit from its early lead in this space.

2 Smartest Tech Stocks to Buy in 2023 and Beyond