Find out where the winners and losers are.

Over the weekend, investors celebrated the 10th anniversary of the stock market's lowest point during the bear market of 2008-2009. The S&P 500 (^GSPC 0.25%) and the Dow Jones Industrial Average (^DJI 0.08%) hit their lowest points on March 9, 2009, before mounting a decade-long bull market that sent shares to unprecedented levels.

The financial crisis that brought about the stock market's plunge stemmed from the end of the housing boom in the U.S. during the mid-2000s. With many banks having extended credit on dubious terms to mortgage borrowers, the big drop in housing prices in many key markets across the nation created problems for lenders. Even the largest financial institutions proved undercapitalized to withstand the pressures that the housing bust created, sending shock waves throughout the global financial system, and it took massive government bailouts to ensure that big banks would be able to make it through the toughest part of the crisis.

Since then, the stock market has seen strong returns, but they haven't been equally strong everywhere. As you can see below, various market measures have given investors very different returns. 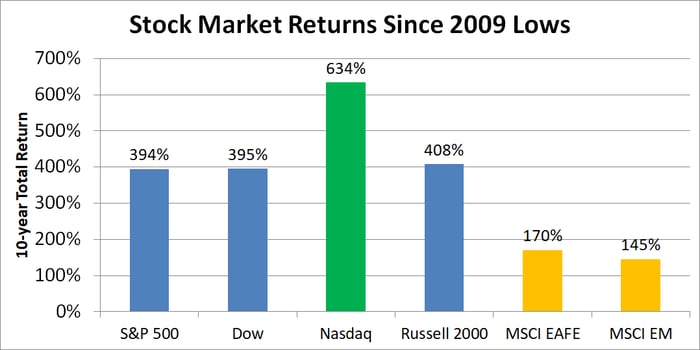 A few points are worth noting. First, international markets have dramatically underperformed U.S. stocks over the past decade, as many foreign economies have gone through their own regional crises of confidence. That's been evident both in developed markets in areas like Western Europe and in emerging markets across China, India, Brazil, and Russia.

Second, in the U.S., the Nasdaq has been the big winner, with gains far outpacing those of other benchmarks. That's due in large part to the surge in technology stocks, which have done better than the broader market and produced some of the biggest winners of the past decade.

Finally, it's interesting to see that the Dow's and S&P's returns are almost identical. There's been plenty of discussion over the years about how the Dow's old-fashioned price-weighted calculation makes it a misleading indicator of stock performance, but over the long haul, it's tracked market-cap-weighted measures like the S&P quite closely.

In the decade to come, it's unlikely that investors will see stock market returns that come close to matching the track record of past 10 years. But over the long run, the rise and fall of the stock market has produced returns that have helped millions reach their financial goals.