Shares of Tandem Diabetes Care (NASDAQ:TNDM), the maker of the t:slim X2 insulin pump, rocketed 50.8% higher last month, according to data from S&P Global Market Intelligence. The stock is up a whopping 1,490% over the one-year period through Friday, March 8. On Feb. 14, shares of the San Diego-based company received some Valentine's Day love from investors after the company announced that the U.S. Food and Drug Administration (FDA) has classified its t:slim X2 insulin pump as the first in a new device category called Alternate Controller Enabled Infusion Pumps, or ACE pumps. Shares popped 6.2% on the day this news came out and 11.4% over the two-day period following the announcement. In the press release, then-CEO Kim Blickenstaff said that this new classification "provides more flexibility for us as we make improvements to current products, create new products, and collaborate with best-in-class companies in the development of future automated insulin delivery systems."

(On March 1, Blickenstaff transitioned to the position of executive chairman of the board of directors and John Sheridan became the company's president and CEO. Sheridan had served as the company's executive VP and COO since April 2013.)

The biggest catalyst occurred on Feb. 26 when Tandem Diabetes released better-than-expected fourth-quarter results along with strong 2019 guidance. Shares surged 25.2% the next day and 32.7% over the two-day period following the release. In the quarter, revenue jumped 89% year over year to $76.2 million, driven by total pump shipments surging 133% to 16,168. Wall Street was expecting revenue of just $56.3 million. The company posted earnings per share (EPS) of $0.02, compared with a loss of $1.23 per share in the year-ago period, crushing the analyst consensus estimate of a loss of $0.20 per share. 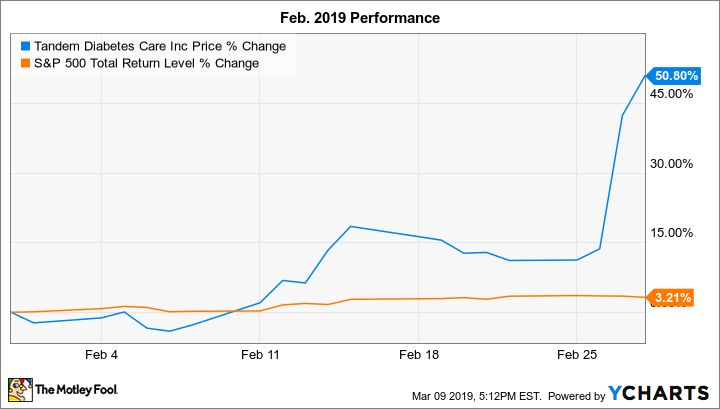 The following chart shows the one-year picture for Tandem Diabetes stock. The catalyst that lit a fire under the stock was the company receiving FDA approval for its new automated insulin-delivery solution in June. The company touts the t:slim X2 insulin pump with Basal-IQ technology as the "first insulin pump designated as compatible with integrated continuous glucose monitoring (iCGM) devices." 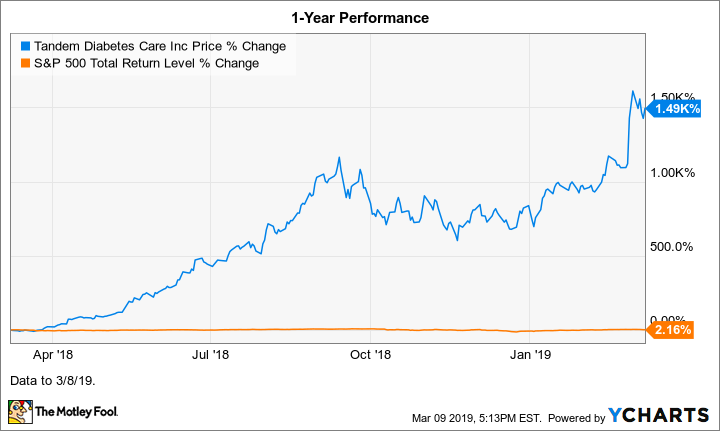 And here's how Tandem Diabetes stock has performed since its initial public offering (IPO) in Nov. 2013. 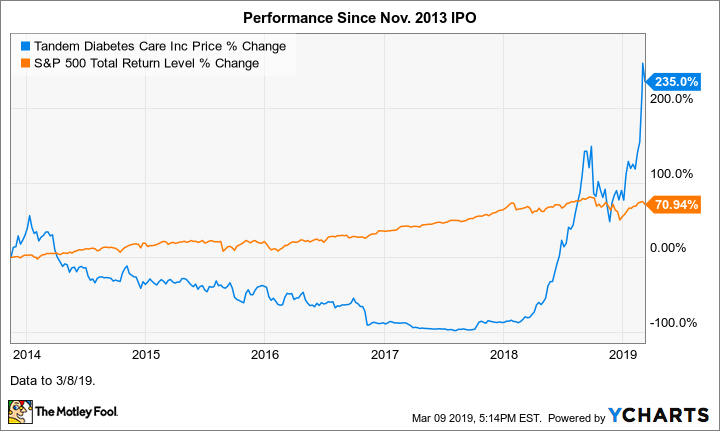