The company's two big profit drivers -- groceries and prepared foods -- matched or exceeded management's expectations in the most recent quarter.

Coming out of the Great Recession, few companies performed as well as Casey's General Stores (CASY -3.21%). The small-town convenience and gasoline store returned 550% for investors between March 2009 and the May 2016 retirement of then-CEO Robert Myers.

After that, however, came a spell of disappointing results and mixed signals from the new leadership team under the direction of current CEO Terry Handley. What followed was two years of substantial market underperformance.

But in late 2018, the company appeared to regain its footing.

This week's earnings release for the company's fiscal third quarter shows that trend has continued. 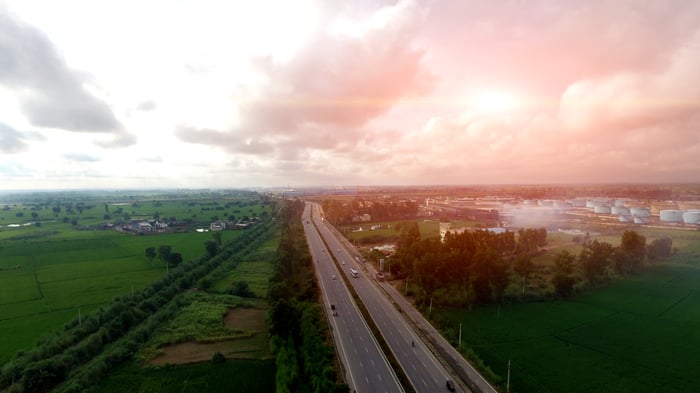 Before diving deeper into the company's performance, let's look at the most-followed metrics.

Investors shouldn't read too much into the company's flat revenue growth. Gas is by far the biggest component of sales, even though the profits from the company's other two segments -- groceries and prepared foods -- are the bigger profit drivers. And because the price of gas can fluctuate so widely, changes in revenue don't give us a very clear picture of how the company's doing. That's also why it's not that surprising to see such a dramatic increase in earnings off flat revenue growth.

To get a better idea of all the company's moving parts, let's look at how all three divisions performed. Following solid results last quarter, management updated its fiscal 2019 goals for all segments.

Comps in this table is short for sales at comparable stores -- a metric that backs out the effect of new stores opened in the past year.

While missing fuel comps goals isn't great, the fact that margins outpaced expectations helps soften the blow. The big story is that both the grocery and prepared-food categories came in ahead of expectations.

What's more, with fuel comps down 3.4%, its fair to assume that there's less traffic at Casey's than last year. But even so, it's clearly selling more goods inside the store -- an impressive feat.

The company hopes to capitalize on this momentum by beginning to integrate e-commerce and mobile commerce in store operations, and piloting a price optimization program for both groceries and prepared goods that varies price by market.

Because the company's fiscal year ends on April 30, the current quarter will be the last of fiscal 2019. Management made a few changes to the overall comps and margin goals.

On the negative side, the midpoint of fuel comps was lowered from negative-0.25% to negative-1.25%. But that is canceled out by an improved outlook on prepared-food margins, the midpoint of which increased from 61% to 61.5%.

Management also indicated that it might fall short of its new store construction by April 30, as the previous outlook of "60-plus stores" was lowered to "55-60 stores."

But perhaps most important, Handley and his crew indicated that operations are getting leaner and more efficient. Growth in operating expenses for the year is expected to come in at a midpoint of 8.5%, an improvement from the previous estimate of 9.5%. And depreciation and amortization expenses are also going to eat up less revenue growth, with expected growth of just 12%, compared with the previous midpoint of 14%.

The takeaway is a company that appears to be getting a much firmer handle on what each fiscal year will produce, with leaner operations that allow for more cash to drop to the bottom line.

3 Top Stocks Dividend Aristocrat Investors Are Missing Out On

If You Love Convenience Stores, Will You Love Casey's?
401%