Before Starbucks (NASDAQ:SBUX) existed, 7-Eleven stood as a quality option for a cup of fresh-brewed coffee. While most convenience stores had pots of java sitting around for who knows how many hours along with non-dairy creamer and sugar packets, 7-Eleven had coffee stations with multiple brews, flavored creamers, milk, and cream.

That may not sound like much, but before Starbucks elevated the coffee experience in the United States, it was one of the best options available for people who did not want to brew their own pot. And in recent years, 7-Eleven has continued to up its coffee game, adding iced choices, flavored creamers, and a variety of coffee flavors.

However, the convenience store chain has always been about the grab-and-go experience. It hasn't offered a cafe for consumers looking to linger over their coffee, get a little work done, or maybe read a magazine. That may soon change, as the retailer, which has nearly 10,000 stores between the U.S. and Canada, has begun testing a cafe format. 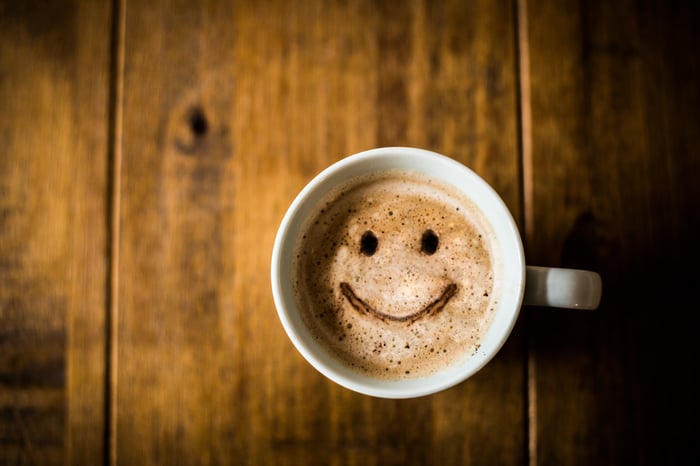 7-Eleven has a pretty extensive drink lineup, which includes soda and its signature Slurpee brand along with its coffee, tea, and other hot beverage offerings. Now the company plans to leverage some of those drinks into a new test store concept that contains a cafe.

A recently-opened Dallas store has a full-service cafe that offers espresso-based drinks with a menu similar to what Starbucks offers, according to the Oak Cliff Advocate. The espresso drinks, which includes lattes, cappuccinos, macchiatos, and other favorites both hot and iced, cost between $2.69 and $3.49. In addition, the concept store will offer fruit smoothies, shakes, and kombucha on tap.

While the cafe is limited to a single location at the moment, 7-Eleven is being aggressive in its plans to try out new models. It plans to open five other concept stores which will be used to test ideas like the cafe, higher-end food offerings, and mobile-ordering technology.

Should Starbucks be worried?

While this idea is in its infancy, the cheaper prices may attract some business -- but 7-Eleven isn't alone in undercutting Starbucks. McDonald's (NYSE:MCD)offers a full coffee lineup with its McCafe Menu at cheaper-than-Starbucks prices, as do convenience store chains like Wawa, which offers seating and uses automated ordering kiosks.

It's hard to think that 7-Eleven will win much business from Starbucks, but it may take back share from rivals including Wawa and McDonald's. This addition could also lead to the chain's existing customers spending more time in its stores and increasing how much they spend.

A market clearly exists for lower-priced high-end coffee drinks. That's a crowded space, however, and includes not only McCafe and Wawa but also Dunkin', a company that lacks some of the highfalutin airs many people associate with Starbucks.

This test store may show that consumers don't want to hang out at 7-Eleven (or that the ones who do may not be the ones with money to spend). It's an important step for the chain to see if it can serve a different market, and offer an alternative to Starbucks that's cheaper while being more of a cafe than what either Wawa or McDonald's offers.