Alphabet (NASDAQ:GOOG) (NASDAQ:GOOGL) subsidiary Google has been making strides in consumer hardware, generating an estimated $3 billion in gross profit last year. However, much of that success is likely attributable to the search giant's Pixel phones and increasingly popular lineup of smart speaker and smart-home devices. Google almost certainly has a Pixel Watch smartwatch in the works, too. In contrast, critics have mostly panned Google's laptop and tablet lineup, the Pixelbook and convertible Pixel Slate.

The company is now reportedly slimming down its hardware efforts. 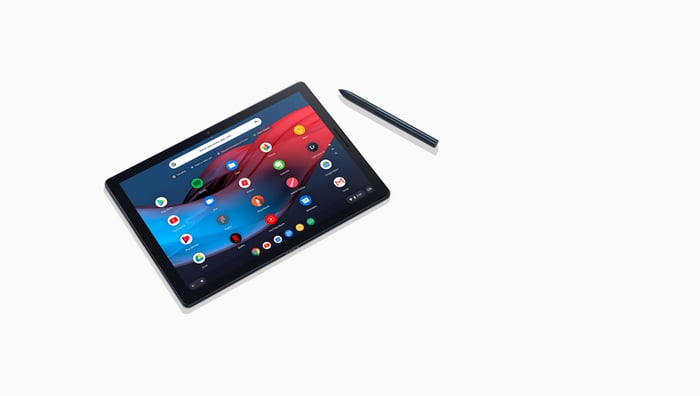 A change of plans

Business Insider (subscription required) reports that Google has been moving laptop and tablet employees out of the hardware segment as part of "road-map cutbacks." The impacted workers aren't being laid off, but instead being asked to transition to other temporary positions within the company.

The shift isn't all that surprising, considering the underwhelming reception that the Pixelbook (released in October 2017) and Pixel Slate (released in October 2018) have received. While there isn't hard data on unit volumes -- either from Google directly or from third-party researchers -- the Pixelbook was derided as an overpriced Chromebook while the Pixel Slate suffers from software quirks that hinder its usability and otherwise compelling hardware.

It may also be telling that when discussing hardware successes on the earnings call last month, CEO Sundar Pichai highlighted the growing Google Home portfolio and noted advancements in the Pixel 3's camera system -- without ever mentioning the Pixelbook or Pixel Slate. "It was another record year for our Google Home family of devices with millions sold this holiday season," Pichai said.

Google may be recognizing that its first-party efforts in laptops and tablets simply aren't worth the trouble. Third-party Chromebook manufacturers are helping drive volume with low-cost models in key markets like education, and Apple (NASDAQ:AAPL) dominates the tablet market with the iPad.

Taking another shot at smartwatches

Instead, Google is probably reorienting its hardware strategy to build on the momentum of its successes while preparing to take a fresh shot at the smartwatch market, which is now booming. Within the broader wearables market, smartwatch volumes soared an estimated 54% in 2018, according to IDC.

Google has so far struggled in making a name for itself in wearables and smartwatches, as Wear OS (initially named Android Wear) failed to gain any meaningful traction and many prominent hardware partners ditched the platform. Apple and Fitbit (NYSE:FIT) currently lead the way in smartwatches, but Google hopes to take another swing with its forthcoming Pixel Watch. As part of those efforts, Google recently bought smartwatch tech and acqui-hired employees from Fossil for $40 million.

The Pixel Watch, which will be Google's first first-party smartwatch, is expected to debut as soon as this fall, presumably around the same time Apple unveils the Apple Watch Series 5. Fitbit might similarly refresh its smartwatch offerings then.