Here's why investors should arguably never sell their shares of AbbVie, PepsiCo, or McDonald's.

Dividend Aristocrats -- or companies that have raised their dividends for a minimum of 25 consecutive years -- are always worth considering as long-term investing vehicles. These elite income stocks, after all, have trounced the performance of the broader markets for nearly 30 straight years at this point.

We thus asked three of our Motley Fool contributors which Dividend Aristocrats they would choose to buy and hold for basically forever. They choose AbbVie (ABBV 0.04%), PepsiCo (PEP -0.05%), and McDonald's (MCD -0.80%). Here's why. 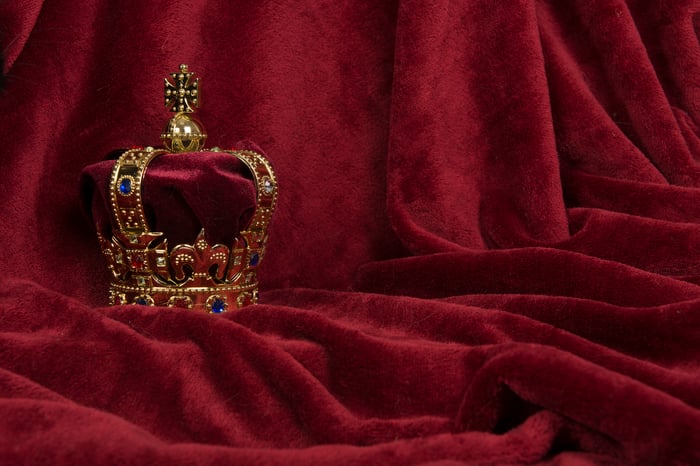 George Budwell (AbbVie): AbbVie, an Illinois-based drugmaker, is a Dividend Aristocrat by virtue of its former parent company, Abbott Laboratories. Even so, this top biopharma has done a lot to earn this coveted label on its own. Since going public in 2013, for instance, AbbVie has raised its dividend by an astounding 168% -- among the fastest within the large-cap biopharma space.

Despite its top-notch dividend growth rate and its industry-leading levels of revenue growth over the past five years, AbbVie's stock has fallen out of favor with investors in 2019. AbbVie's shares have dropped by over 14% during just the first two and a half months of 2019. The long and short of it is that investors simply aren't buying that the company is capable of replacing Humira's revenue stream once the drug loses patent protection in the United States starting in 2023.

Why? Well, AbbVie did experience a significant setback with the clinical failure of its cancer treatment Rova-T last year. However, this dire outlook arguably isn't warranted, even after this major clinical flop. AbbVie still has five other promising drugs that should comfortably offset any future dip in revenue stemming from Humira's loss of exclusivity.

Specifically, the company's cancer franchise is growing by leaps and bounds due to the breakout success of both Imbruvica and Venclexta; its new endometriosis drug called Orilissa is expected to ramp up slowly, but eventually achieve blockbuster status within the next decade; its hepatitis C medicine, Mavyret, should remain a stable source of revenue for at least another eight years; and the drugmaker's two high-value immunology assets -- risankizumab and upadacitinib -- should both gain key regulatory approvals later this year.

Stated simply, AbbVie should have little trouble maintaining its elite dividend program for the long term thanks to its well-rounded product portfolio and top-shelf clinical pipeline.

Check out the latest earnings call transcripts for AbbVie, PepsiCo, and McDonald's.

A sturdy beverage and snack giant

Keith Noonan (PepsiCo): A lot of the talk around PepsiCo and the beverage industry as a whole in recent years has revolved around the decline of soda. That might raise concerns about PepsiCo's ability to continue thriving and returning cash to shareholders if the business depended too heavily on sugary drinks. However, the company is actually pretty well diversified, and it enjoys substantial scale and infrastructure advantages that should help it continue delivering a solid performance.

Pepsi's North American beverage segment accounted for roughly 32.5% of the company's revenue in 2018, with its Frito-Lay and Quaker brands filling out its product offerings, and sales in non-domestic markets completing the sales picture. The company's Frito-Lay Snack division in particular has helped to deliver solid performance even as the fizz in domestic soda sales has gone worse than flat, allowing Pepsi to post 4% organic revenue growth in 2018.

While the domestic soda slowdown has hurt performance, the shift in the market has not been abrupt or dramatic in a way that's caught Pepsi flat-footed, and it gives the company a reasonable timeline to continue modifying its beverage portfolio to better cater to market tastes. The beverage giant has already made significant progress on that front, and thankfully, the soda headwinds aren't affecting all geographic segments. With an international distribution imprint that has the distinction of being both incredibly impressive in scale and still open for growth, PepsiCo has long-term opportunities as it steadily expands and takes advantage of new operating efficiencies.

Pepsi yields roughly 3.2% and has raised its dividend on an annual basis for 47 years running. With the business looking strong and the cost of covering its current forward distribution coming in at a reasonable payout of 60% of trailing free cash flow, investors can continue to rely on the stock for steady payout growth for decades to come.

Jeremy Bowman (McDonald's): One Dividend Aristocrat I'd feel comfortable holding forever is McDonald's. The global fast-food leader has consistently delivered strong returns for investors, and it has raised its dividend every year for 43 years straight. Today, it offers a dividend yield of 2.6%, and it last raised its quarterly payout by 15% to $1.16 in Sept. 2018. Considering the company's reasonable payout ratio at 61.5%, investors should expect continuing dividend increases, though they won't be as high as 15% every year.

Like many Dividend Aristocrats, McDonald's is a great choice for investors looking for defensive stocks, or investments that are resilient during a recession or a market downturn. As a fast-food restaurant chain offering cheap, convenient foods in places like city centers, interstate exits, malls, and airports, McDonald's business is relatively stable regardless of the overall health of the economy or consumer spending.

The company's franchise model further protects it from the vicissitudes of the economy as it is not directly responsible for things like labor costs at most of its restaurants. Like any industry, fast food is evolving with the influence of fast-casual chains like Chipotle and the popularity of delivery, but McDonald's is pivoting with it, remodeling restaurants in a program it calls Experience of the Future and partnering with UberEats on delivery.

While the intricacies of the fast-food industry may change over time, the need for people to get fast, cheap, convenient food where they are is lasting, and no company has built a stronger position to meet that demand than McDonald's.