Are casino REITs a good investment? There are some big governance and growth issues you need to think about first. Here's one casino REIT that stands out.

Casinos are a relatively new niche in the world of real estate investment trusts (REITs). The creation of the three REITs in the tiny group, however, involve a lot of worrisome corporate interconnections. That's why it was so interesting to hear Edward Pitoniak, the CEO of VICI Properties (VICI -0.12%) describe his company as offering "the optimal combination of governance, independence, growth profile and cost of capital" in the casino REIT space when I had the pleasure of speaking to him recently. Since these are all pretty big issues, I thought it was worth the time to fact-check his assertions ... and see just what's going on with casino REITs.

What VICI Properties does

VICI describes itself as an experiential real estate investment trust. Paraphrasing Pitoniak, its goal is to tap into the increasing desire among older, generally retired Americans and younger millennials for exciting, destination-led experiences. The long-term plan is to own assets that range from sports venues to movie theaters to amusement parks -- essentially, places you go to have some fun. Right now, however, the company mainly owns casinos (it has some exposure to golf courses, but it's minimal). 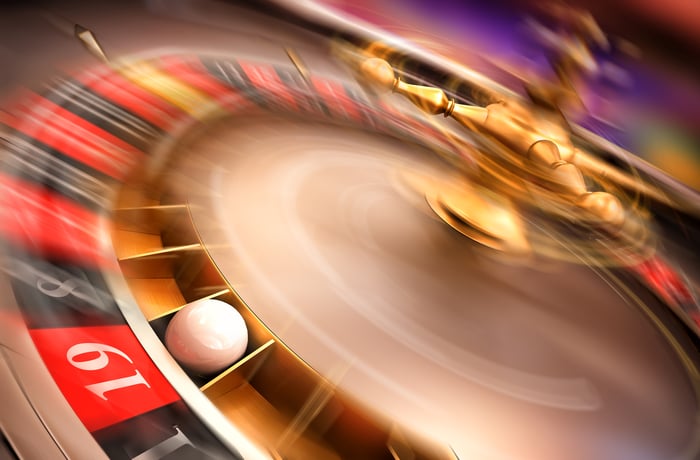 VICI owns 22 gaming facilities that contain nearly 15,000 hotel rooms and around 150 restaurants, clubs, and bars. Its gaming properties are located in Las Vegas and smaller regional markets. As noted above, casinos are a relatively new REIT niche, and VICI competes with just two other companies in the space: MGM Growth Properties (MGP) and Gaming & Leisure Properties (GLPI 0.09%).

All three have similar creation stories, as they were each made specifically to own the underlying properties of a casino company. That casino company then leased back the properties using a net lease structure, which requires the operators to pay for most of the costs of the properties. It's a fairly low-risk model for the REITs, allowing them to earn the difference between their cost of capital and the rents they charge. In VICI's case, it was spun out of Caesars Entertainment in late 2017 when the casino operator was working through a bankruptcy process.

Check out the latest earnings call transcript for VICI Properties.

One of Pitoniak's first assertions is that VICI has an industry-leading governance structure. He explained in our conversation that, when creating the REIT, the goal was to mimic the best governance practices in the entire REIT industry. There's no question VICI lives up to that hype. The eight-member board has an independent chairman and the only member of management is Pitoniak. Pitoniak, meanwhile, holds no special position on the board. Essentially, he is there to answer to the board, not tell the board what to do. It would be nice to see more companies, across all industries, institute this kind of board structure, as it creates vital checks and balances on the CEO.

How does this stack up against peers? MGM Growth Properties' CEO isn't even on his company's board, which sounds great, but there's more to this story that we'll discuss in a moment. As for Gaming & Leisure, the CEO is the chairman of the board, which is not uncommon but limits the oversight the board actually provides on behalf of investors (there's more to this story, as well). Pitoniak's governance claim stands up here.

The next of Pitoniak's points is independence. Clearly, VICI's board is pretty independent, but that's not the only factor to consider here. For example, VICI's board doesn't contain any members from the companies that lease its properties, and its lessees don't have any ownership interest in the company. 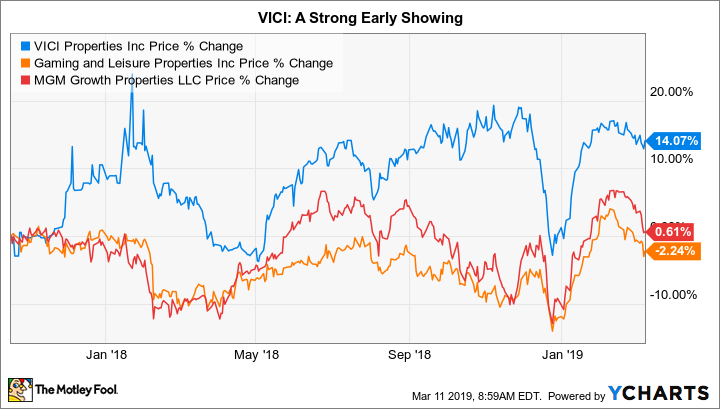 So VICI's independence claim holds up, too. But there is one more little wrinkle here. All of these casino REITs have a highly concentrated customer base. In the case of VICI, virtually all of its properties are leased to Caesars. It has begun to branch out, recently adding Penn National as a lessee, but VICI is still heavily dependent on just one tenant. If a major tenant says it needs to renegotiate its lease, any responsible management team would have to sit down and discuss rent concessions. So, yes, VICI lives up to the independence claims, but you have to couch that within the bigger industry picture.

The next of Pitoniak's assertions is about growth, a harder issue to get a handle on. At the end of the day, all three of these REITs are operating in a highly competitive space with a limited number of operators and desirable locations. That said, you never know when a big corporate action -- such as a merger, acquisition, or bankruptcy (casino operators have an unfortunate history of taking on too much debt) -- could alter the playing field. After all, it was a bankruptcy that led to the creation of VICI, increasing the competition in the casino REIT space from two to three.

That said, VICI does have a pipeline of properties on which it either has options to purchase or right of first refusal. All of these assets are currently owned by Caesars. Since casinos are fairly large properties, it wouldn't require more than a couple of acquisitions a year to keep VICI's top and bottom lines growing. By comparison, MGM has right of first refusal on multiple properties and is clearly in a leading position to buy other assets from its parent MGM Resorts. Although Gaming & Leisure Properties doesn't have the same built in growth, it was able to add eight properties in 2018. Moreover, it is specifically looking to expand in regional markets outside of the core gaming markets that should drive growth at VICI and MGM. Without trying to predict the future, we'll grant that VICI has a very clear path to growth that is, at the very least, as good as its two peers'.

The bigger issue is whether it can capitalize on the opportunity. And to answer that, we need to look at the REIT's cost of capital. All three have similar credit ratings, so they should be able to sell debt at competitive rates if they needed. However, their dividend yields are vastly different. VICI's yield is roughly 5.5%, MGM Growth's is 6%, and Gaming & Leisure's is 7.6%. Using yield as a rough proxy, VICI comes out ahead, since each new share issued comes with a lower dividend cost. Once again, Pitoniak's comments appear to be backed by the real-world evidence.

There's clearly more that you need to look at when considering VICI Properties than we've gone into here, including whether or not a gaming REIT is an appropriate investment option for you. However, if you're interested in the casino REIT space, the CEO's assertion that his company stands out for its governance, independence, growth profile, and cost of capital holds up to scrutiny. And while its yield may be below those of its peers, sometimes income investors are better off accepting a lower yield to gain access to a better company. This looks like just such a situation to me.