Some major moves are coming.

Investors have followed the Dow Jones Industrials (^DJI -0.38%) for more than a century. The venerable stock benchmark has stood the test of time, and its 30 stocks still enjoy a reputation for excellence as a result of their status as Dow components.

One of the reasons why investors hold the Dow in such high regard is that the amount of turnover in the benchmark is low. While other indexes like the S&P 500 make changes frequently, it's rare to see stocks leave or enter the Dow more than every few years. Yet within the next nine months, it's likely that the Dow will see two of its components -- DowDuPont (DD -2.09%) and United Technologies (RTX -0.49%) -- make their exits from the index.

Two stocks with a strong pedigree

There's nothing about DowDuPont and United Technologies that on their face would suggest that they don't deserve their places within the Dow Jones Industrials. Both companies have true industrial roots, with DowDuPont having a major concentration in chemicals while United Technologies has a heavy emphasis on aerospace and defense. 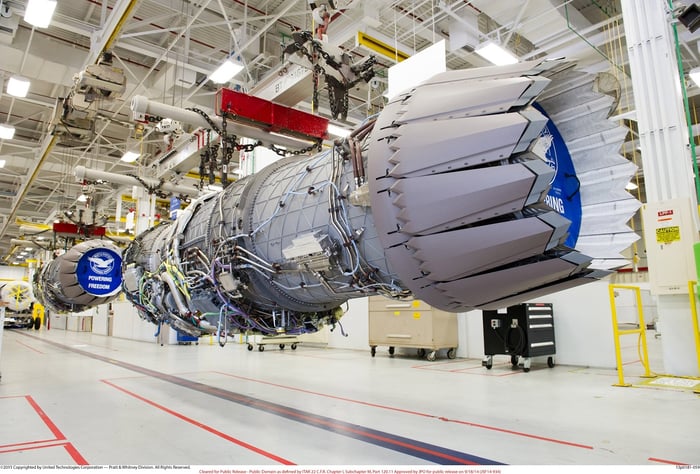 Moreover, DowDuPont and United Technologies are plenty large enough to warrant inclusion in the Dow. Both have market capitalizations of more than $100 billion, placing them near the top of their respective industries. And both have long histories of being part of the Dow, as DowDuPont's DuPont unit joined the average in 1935 while United Technologies -- formerly known as United Aircraft -- came in just four years later.

Check out the latest earnings call transcript for DowDuPont and United Technologies.

The reason why these stocks are likely to find themselves out of the Dow soon has to do with what's happening internally within their respective businesses. Both DowDuPont and United Technologies expect to break up their operations into multiple smaller parts, and it's likely that the resulting separate companies will be too small to remain within the Dow.

For DowDuPont, the company expects at least three businesses to emerge from its anticipated breakup. The largest in terms of revenue will be the Dow materials sciences unit, which will concentrate on various lower-margin aspects of the company's chemicals business. Next-biggest will be the DuPont specialty products company, which should get the part of the conglomerate's business that deals with manufacturing of electronics, transportation, biosciences, and other higher value-added areas. Finally, the company's agricultural products portfolio, tentatively to be dubbed Corteva Agriscience, will be the smallest of the units.

DowDuPont's breakup is expected to start happening early this year, with completion seen by June. Final approval of the board of directors is required, but few anticipate any hiccups down the road. With potential gains from synergies, the chemical giant hopes that the move will unlock shareholder value while also enhancing the overall business.

The next step for United Tech

Meanwhile, United Technologies also plans to break itself into three parts. The conglomerate will separate out its Otis elevator business into a separate company, and it will also break out its Carrier business. Carrier is best known for its heating and air conditioning equipment, but it also has a host of fire, security, and building systems expertise that give it a more well-rounded portfolio of work to offer its customers.

What will be left within United Technologies is most of its aerospace business. The unit will include the Pratt & Whitney unit that focuses on aircraft engines and related parts and services, the UTC Aerospace Systems business for equipment systems, and the assets it recently acquired in its merger with Rockwell Collins. That company will have the largest revenue of the three, but it won't be so huge as to utterly dominate the other two parts of the old United Technologies.

It's theoretically possible that the managers who oversee the Dow will decide that the biggest remaining component part of these two Dow stocks will be large enough to warrant membership. Especially with DowDuPont, there's little general chemical exposure elsewhere in the Dow, making the industry giant's role important. By contrast, the Dow already has aerospace exposure from Boeing, making it less vital to keep a part of United Technologies in the mix.

In any event, it'll be interesting to see how the overseers of the Dow decide to handle the impending situation. Investors could see big changes that might transform the average considerably -- pushing it even further away from its industrial roots toward a different concentration of businesses entirely.