The key takeaways from the company's breakup announcement, and how investors should think about the stock.

It's fair to say that the market wasn't exactly overwhelmed by the announcement that United Technologies (RTX 0.65%) will be separating into three companies. At the time of this writing, the stock is down nearly 6% since the announcement at the end of November versus a slight rise in the S&P 500 index, whereas its closest peer, Honeywell International, is slightly down. What's going on, and has management made a misstep? Let's look at what the announcement means.

Time to break up

Frankly, very few investors would have been surprised by the announcement: CEO Greg Hayes signaled an intent to do as much in the spring. As expected, the remaining United Technologies will comprise Pratt & Whitney (aircraft engines and aftermarket parts and services), UTC Aerospace Systems (original equipment and aftermarket parts), and the just-completed acquisition Rockwell Collins.

Meanwhile, Otis (elevators) and the current climate, controls, and security (CCS) business -- now known as Carrier -- will both be separated within the next 18 to 24 months. Investors who hold UTC stock at the time of the breakup will thereafter own stock in all three resulting companies. 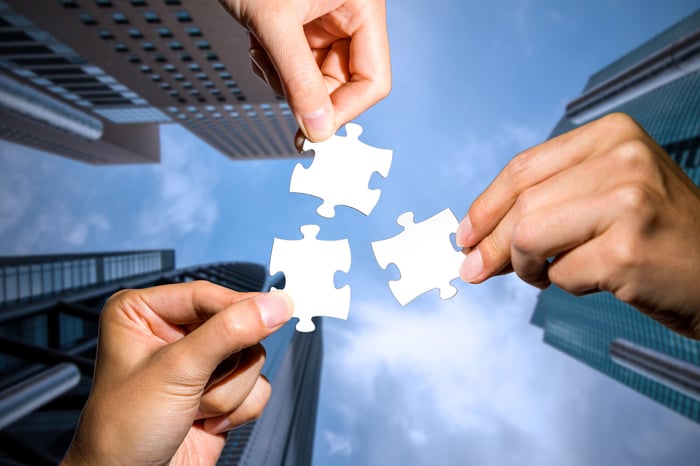 If it all makes sense, then why is the stock down?

That's a good question, because there wasn't much in the announcement that should have surprised investors. For example, CFO Akhil Johri outlined that management expects the one-time costs to be in the range of $2.5 billion to $3 billion, but Hayes had already discussed this in September.

The only slight negative came from the estimate of additional overhead costs, where Johri said, "the placeholder we have there is $350 million to $400 million," versus the $350 million figure that Hayes gave in September.

Immediate attention focused on the reduction in earnings and cash flow guidance. Indeed, management did update its full-year guidance and downgrade full-year adjusted EPS guidance to a range of $7.10-$7.20, from $7.20-$7.30. And free cash flow guidance was revised down to $4.25 billion-$4.5 billion, from a previous range of $4.5 billion-$5 billion. But both changes are related to the acquisition of Rockwell Collins -- there wasn't a material change in United Technologies' underlying outlook.

Sell on the news?

All told, the stock's drop looks like a good old-fashioned case of "sell on the news." The breakup has been so well publicized that it could have hardly come as a surprise, and it's likely that many investors would have been looking for an opportunity to exit the stock after the announcement.

No matter: If you are bullish on the rationale for the breakup and the long-term prospects, then there wasn't much in the presentation to dissuade you from continuing to hold the stock. Ongoing investors will own three different companies that could all see a re-rating due to the separation -- and that would be good news.