There's no point ignoring the elephant in the room. General Electric Company (NYSE:GE) is facing a very difficult period: It's highly likely to take a heavy hit from costs incurred as a consequence of problems with a GE Power gas turbine blade. And the reality is that even before the issue hit, GE's 2018 earnings and cash flow guidance was under heavy pressure due to deteriorating conditions in the power segment -- the last thing GE investors want, since margin recovery in power services is an integral part of GE's plan to improve its credit rating metrics.

That said, what about GE Aviation, the jewel in GE's crown? Can the aviation segment help offset weakness in power?

GE Aviation is the key to beating expectations

As one of three big businesses (power, aviation, and renewable energy) that are going to remain part of GE after the company's restructuring plans are complete, and by far the biggest profit generator at GE, it makes sense to focus on what investors can expect from GE Aviation in the near and long-term. 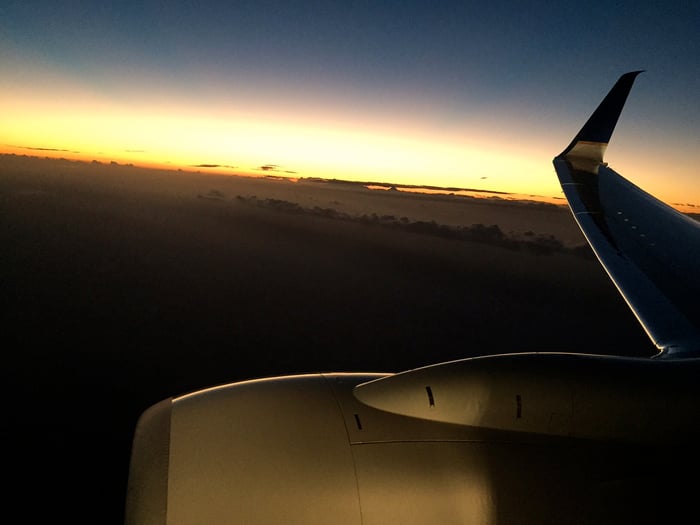 GE's CEO John Flannery and CFO Jamie Miller have spent much of 2018 arguing that the segment's strength would (along with healthcare) help offset weakness in power.

They have a point.

Three reasons why GE Aviation can beat expectations in 2018

First, commercial aviation markets have been stronger than most people expected coming into 2018. Strong aerospace markets are behind Honeywell International and United Technologies (NYSE:RTX)  beating earnings expectations in 2018, and as you can see below that GE Aviation aftermarket sales continued to grow at a near 20% rate in the first half. 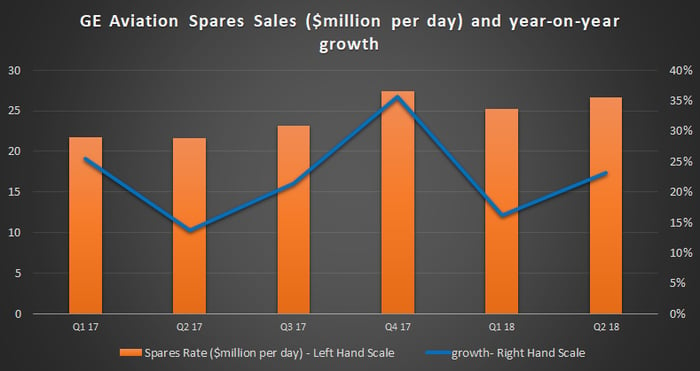 Second, GE Aviation's segment profit of $3.1 billion in the first-half is important: The segment looks capable of beating management's implied guidance of some $6 billion-$6.25 billion.

When aircraft engine manufacturers start producing engines, they usually incur heavy losses on selling the engines -- particularly early on, as unit production costs tend to be higher. The real money in aircraft engines is made in services and aftermarket revenue, which only starts to kick in a few years later.

It's counter-intuitive to say this, but it's possible for aircraft engine manufacturers, such as GE and United Technologies's Pratt & Whitney, to actually make more money than expected by falling behind production schedules and making fewer loss-making engines than expected within a given period. That's exactly what's been happening with GE in 2018.

GE's original plan was to ship 1100-1200 LEAP engines (actually a CFM International engine, a joint venture between GE and Safran), but GE was "four weeks behind schedule" at the time of its second-quarter earnings call according to Miller. In fact, only 186 LEAP engines were shipped in the first-quarter; even so, the footnotes in GE's earnings release stated that margin growth from "higher price on commercial engines and aftermarket materials, as well as product cost productivity" was "partly offset by negative mix from higher LEAP shipments." This is an explicit recognition of the point that more LEAP shipments hurt margins.

Fast forward to the second-quarter and you can see margin compression as LEAP engine shipments ramped to 250 from 69 in the same quarter of last year.

Speaking on the second-quarter earnings call, Miller claimed that GE was still on track to deliver 1100-1200 engines. But to do this GE needs 664-764 deliveries in the next six months. However, according to a recent article in Aviation Week, CFM International "admits that it remains 4-6weeks behind its delivery plan to Airbus and Boeing."

This implies that LEAP production will fall short of expectations in the next couple of quarters -- and that could be good news for GE Aviation's margin and profits compared to what management has been guiding for.

It's important to note that failing to meet LEAP  production targets is not a net positive -- it will slow services sales down the line --, but it is useful to understand the context around how GE Aviation is generating profit. Particularly, as there is a lot of scrutiny around the quality of GE's earnings right now.

What GE investors should make of it

Of course, falling behind production schedules would definitely not be by intent, as aftermarket/services revenue won't be generated until engines have actually been shipped -- and the last thing GE would want to do is encourage customers not to order engines, or create issues with Boeing and Airbus, both of which are pushing to ramp production of their narrow-body aircraft.

The aftermarket/services revenue from LEAP is an exciting area of long-term growth for GE Aviation, and a key reason to contemplate buying the stock. And it's worth noting that GE (like United Technologies, for that matter) is suffering some earnings compression as a consequence of increased production of new aircraft engines. It's something to think about when considering what's likely to be a very difficult period for the company ahead.