Please ensure Javascript is enabled for purposes of website accessibility
Log In Help Join The Motley Fool
Free Article Join Over 1 Million Premium Members And Get More In-Depth Stock Guidance and Research
By Lee Samaha - Aug 28, 2018 at 6:03AM

Investors can't expect too much in the near term from one of the three key GE businesses.

General Electric Company's (GE 2.27%) renewable energy segment is often ignored when investors look at the stock, but given that it's set to be one of the three pillars of the business in the next few years, it makes sense to take a closer look at the business. In addition, as the company fights tooth and nail just to meet the low end of its earnings guidance range for 2018, it's going to need every bit of help from GE Renewable Energy. Let's take a closer look at what's going on with the segment. 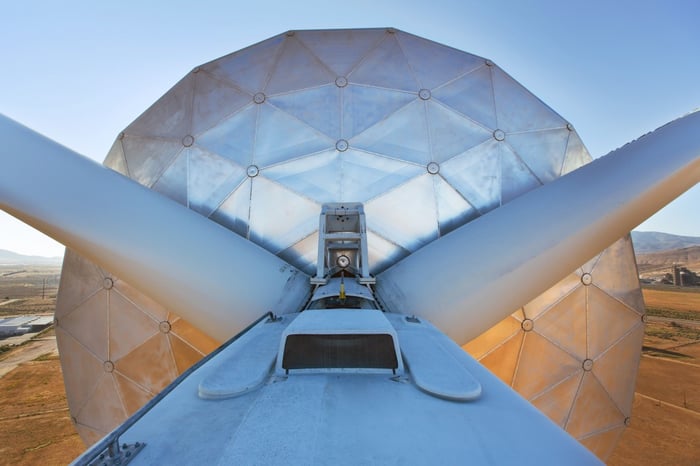 GE's restructuring plans involve creating a stand-alone healthcare business, separating its stake in Baker Hughes, a GE Company (BKR 0.70%), and focusing on power, aviation, and renewable energy. As you can see below, the renewable energy segment only generated 7.4% of the three businesses' total segment profit in 2017 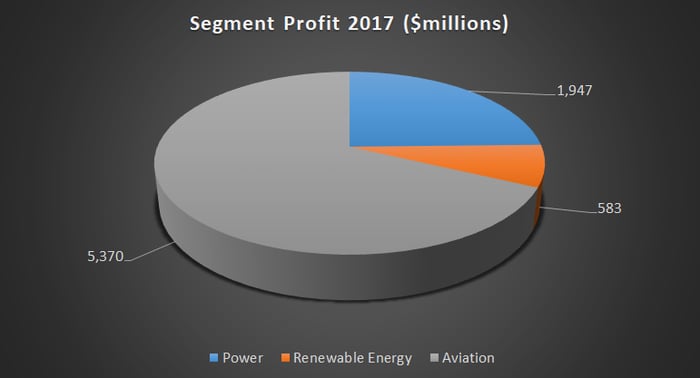 It's no secret that the power segment is in the middle of a difficult period, with end demand for heavy-duty gas turbines set to remain weak in the first few years, according to both GE and key rival Siemens.

On a brighter note, GE Aviation is doing fine and has strong long-term growth prospects from commercial services and aftermarket, with the LEAP engine (produced by CFM International, a joint venture with Safran Aircraft Engines) being the sole engine of choice on the Boeing 737 MAX.

In addition, the LEAP engine competes with Pratt & Whitney's -- a United Technologies company -- on the Airbus A320NEO family. These two aircraft will dominate the narrow-body market for years to come. Furthermore, the GE9X engine is the sole engine of choice on the Boeing 777X wide-body, an aircraft that Boeing expects to drive wide-body sales in the next decade.

That said, the market knows GE Aviation is set for good growth, and Power is struggling, so it's important for GE Renewable Energy to make a marginal contribution to profit growth.

Digging into the details, it's clear that the segment's prospects are all about wind power. 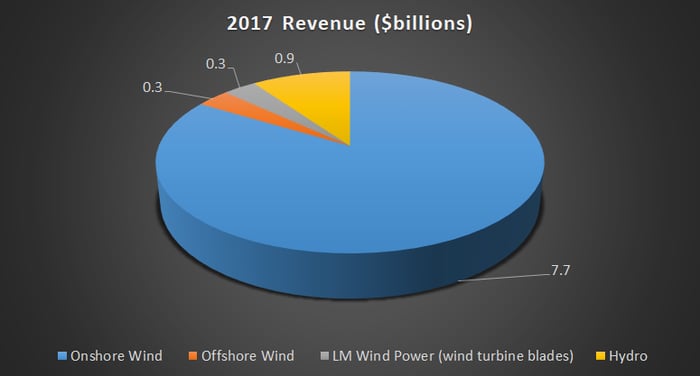 Unfortunately, the evidence is that GE will be challenged to significantly grow profits in the segment, at least in the near term. There are three key arguments against investors expecting too much from GE Renewable Energy.

First, the segment appears to be lagging 2018 profitability estimates. Going back to the investor update in November, management forecasted 7% to 10% growth for both revenue and segment operating profit in 2018. However, the segment's revenue was down 19% in the first half, with profit down 30%.

While CFO Jamie Miller argued that a combination of a "large second-half ramp" in shipments due to a 32% increase in onshore wind backlog and "continued strong service growth should put us on track for revenue growth in line with our prior guidance, 7% to 10% organic," she did not reaffirm that the segment would hit its earnings guidance. The main problem appears to be a "challenging price dynamic in the market." Indeed, segment profit margin in the first half was a mere 4.8% compared to 5.6% in the same period last year.

What competitors are reporting

Vestas reported strong order growth of 43% year on year in its recent second quarter, but as you can see below, gross margin continues to decline, driven by an ongoing decline in average selling prices of its order intake. In comparison, GE Renewable Energy orders were down 15% in its second quarter but flat in the first half. Meanwhile, Siemens Gamesa wind turbine order intake was up just 3.8% in its third quarter, with the average selling price of 0.71 million euros per megawatt comparable to Vestas's number below. 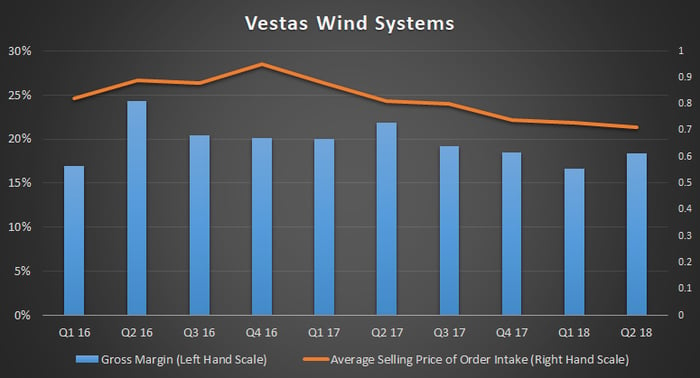 Whichever way you look at it, there is clearly pricing pressure in wind energy, and GE might find it hard to hit its renewable energy segment earnings target.

Third, while wind energy looks set to become America's top renewable energy source in the next couple of years, its long-term growth in the U.S. is set to be eclipsed by solar power. This could be an issue for GE.

Moreover, industry bodies predicting a marked slowing of growth in wind power capacity added in the next decade in the U.S., so the outlook for wind power growth is not great in GE's core market in the U.S., and GE may well need to buy a solar energy company in order to offer storage and wind and solar power solutions in combination.

On a brighter note, industry forecasters are expecting growth to shift to emerging markets and Europe, but pricing pressure may prove an issue in developing countries and GE Renewable Energy has a "relatively smaller market position" according to the company.

For reference, Europe contributed less than 10% of the segment's sales in 2017 and only 34% of segment sales came from outside the Americas and the U.S.

Ultimately, GE  and Vestas are expecting pricing pressure, at least in the near term with the latter stating that "The wind industry is undergoing a transition toward a more mature, unsubsidised renewable energy industry. This transition leads to a highly competitive market, and will likely drive a further consolidation in the industry" in an earnings presentation

Unfortunately, it looks like GE investors can't expect too much from GE Renewable Energy in the near future, and it will be a challenge to meet its 2018 guidance. Most of the media attention focuses on Aviation and Power, and rightly so, but underneath the radar, things don't look great for the company's renewable energy prospects, in the near or mid-term.