One group of investors will be very happy with General Electric's bold move to separate its healthcare segment.

General Electric Company (GE 4.70%) CEO John Flannery finally concluded his strategic review, and it did so with a bang. The announcement to separate GE healthcare as a stand-alone company was framed as a strategic decision, but it almost seems to be a forced response to weakness in GE's power and capital segments. Let's take a look at what happened and why, and how it changes the investment proposition. 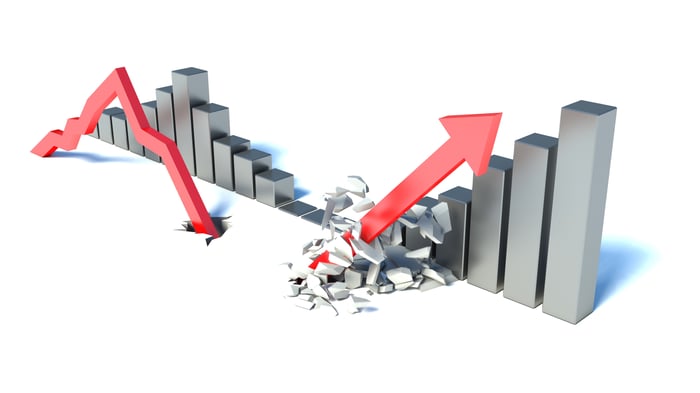 As Flannery was formerly the head of GE healthcare, it figures that no one else is more ideally suited to understanding that the segment is better off outside of GE. In fact, there is a strong case for arguing that Flannery should have taken this action in November of last year.

Instead, he chose to exit $20 billion worth of other businesses and focus GE on power, aviation, healthcare, and renewables while exploring strategic options for GE's stake in Baker Hughes, a GE Company.

In a nutshell, the earnings and cash flow from the highly successful aviation and healthcare segments were supposed to buy time for management to restructure power and get the ailing segment's margin back somewhere near historical figures. The expectation was that 2018 would mark a trough in GE's free cash flow (FCF) generation, leading to notable improvement in the coming years.

What happened to it

Unfortunately, events didn't quite work out as expected since November, and GE investors have been hit with a number of negative developments in the last six months:

All of this hit the stock price hard, and despite the recent rally, it's still down more than 20% on a year-to-date basis as of this writing. There were legitimate fears that GE would miss its 2018 EPS guidance and its free cash flow guidance of $6 billion to $7 billion in 2018. Analysts rushed to downgrade the stock (the analyst consensus for 2018 EPS is just $0.94), and credit rating agencies lowered GE's rating.

Flannery had to take action

The latest cut to GE's credit rating came from Fitch; the agency highlighted a few key issues, including the need for GE to improve FCF generation, reduce its reliance on unsecured short-term debt, and lower its net debt-to-EBITDA (earnings before interest, tax, depreciation, and amortization) ratio -- credit rating agencies typically view a debt-to-EBITDA ratio of 2.5 times or less as suitable for investment-grade debt.

Flannery had little choice but to do something to shore up a deteriorating balance sheet and deal with investors' fears that the company's cash situation would compromise being able to adequately restructure it.

What GE is planning

The expectation is that GE healthcare is attractive enough of an asset that GE can transfer $18 billion into its debt and still successfully spin off the business while monetizing the 20% of GE healthcare that GE will hold (the remaining 80% will go to GE shareholders). Meanwhile, the remaining stakes in Baker Hughes and Westinghouse Air Brake Technologies (Wabtec) can be used to generate cash. In addition, GE has its ongoing FCF generation and the proceeds from its existing plan to dispose of $20 billion worth of GE assets.

All told, Miller argued that "these potential transfers or sources total more than $60 billion. We believe we have ample means to bring our leverage down and achieve our net debt reduction."

To understand the change in the investment proposition, it's useful to think in terms of three loosely defined camps of investors. The first is the naysayers who don't believe GE will turn around the power segment as planned and that it will instead have issues executing on its plans -- this group will actually be more worried by the changes, because power is going to be even more important now that healthcare is being separated.

The second group is the optimists who believe GE will engineer a turnaround in prospects and that the stock is a great value anyway -- this group would probably welcome the healthcare move because it will release value in a business that isn't really complementary to GE's core power, aviation, and renewables businesses.

The third group is a broad swath of investors whose main concern has been that the deteriorating balance sheet, credit rating, and near-term earnings and cash flow difficulties will pressure Flannery's ability to get GE back on track. This group is likely to be appeased by the move to shore up the balance sheet and the plan to get back to an acceptable net debt-to-EBITDA ratio. Flannery has bought some time with this move and helped remove some uncertainty around the stock for these investors. That's a good thing, and it makes the company more investment-worthy for those willing to give him a chance.