In a development that CEO John Flannery described as "deeply disappointing," General Electric Company (NYSE:GE) was forced to take a $6.2 billion after-tax GAAP charge relating to its insurance portfolio. It's not exactly what investors want to hear, after a few tumultuous months involving significant earnings misses and an unconvincing investor update in November.

That said, Flannery has plans to turn things around in 2018, and some of the commentary on the presentation served to increase speculation that a full-scale breakup of General Electric could be in the cards. Let's take a closer look. 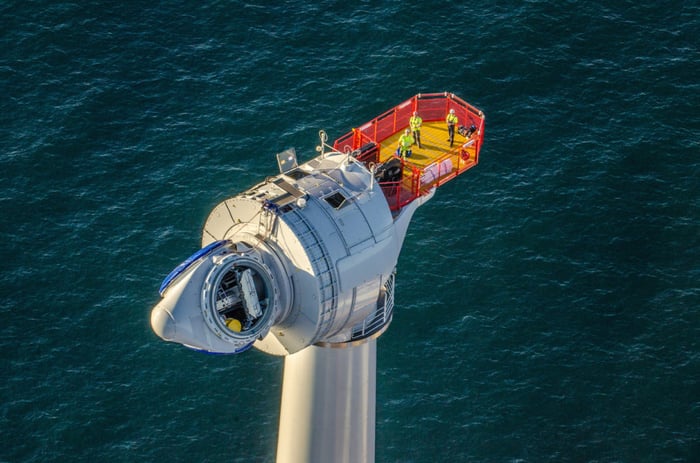 In a testimony to the importance of long-term strategic thinking, the key decisions that came back to haunt GE's insurance business were made over a decade ago. In a nutshell, GE exited Genworth Financial via a spinoff in 2004, and sold the Employers Reinsurance Corporation (ERC) to Swiss Re as part of the sale of GE Insurance Solutions in 2006. Given that these deals took place before the great financial crisis of 2008-2009 , they can only be seen as a positive.

However, in hindsight, the decision to retain life and health reinsurance contracts in order to benefit as they run off (no new reinsurance contracts have been issued since 2006) was a mistake. The business, called North America Life & Health (NALH), suffered a higher level of long-term claims than previously expected. Meanwhile, low interest rates have pressured funding, as investment returns on high-quality bonds are harder to come by.

The end result is the $6.2 billion charge discussed above. GE Capital must make a statutory contribution of $3 billion in the first quarter of 2018 in order to build reserves, and $2 billion annually from 2019 to 2024, which accumulates to around $15 billion over seven years.

GE's management did its best to put the development in the best possible light, stating that GE Capital would fund the contributions and had adequate liquidity to do so. Moreover, Flannery said "we do not expect any impact to the industrial businesses and the capital allocation framework" laid out during the investor update in November. Of course he's right, but there is a potential impact, or at least pressure, on the industrial businesses' strategy because of the actions taken at GE Capital.

One source of pressure could come from GE's dividend and how management plans to pay it. Going back to 2016, GE Capital's dividend to GE was $20 billion, and the company started 2017 expecting $6 billion to $7 billion from GE Capital -- cash that could be used to support buybacks and GE's then dividend payout to shareholders of some $8 billion.

GE Capital's dividend (contributing to GE) did come to $4 billion in the first half but was promptly suspended pending the review.It gets worse. GE has now suspended the GE Capital "dividend to GE for [the] foreseeable future" and has forgone the previously anticipated $3 billion in dividends for 2017.

Similarly, the hit to GE Capital will surely affect how investors value the company according to the sum of its parts, and that could impact GE's ability to raise debt in order to support the industrial businesses.

Will GE break up?

A breakup is not as unlikely a possibility as you might think. In fact, Flannery's response to a question from RBC Capital Markets analyst Deane Dray suggested the CEO was open to the possibility; Flannery discussed "different structures that can achieve" GE's strategic objectives.

He also talked of the possibility of "separately traded assets, really in any one of our units" and referenced Synchrony Financial and Baker Hughes, a GE Company (two listed companies) as examples. He went on to outline that power, aviation, and healthcare -- GE's core segments -- were also up for consideration. In other words, there are no sacred cows in GE's portfolio.

Overall, it's not good news from GE Capital, and GE's core industrial business continues to face significant challenges in its power segment. If there is a positive in the presentation, it's Flannery's openness to considering options. This may help finally shift the investment narrative around the stock from results of the previous management's decisions -- including those made over a decade ago at NALH -- toward what Flannery's leadership could do to release value for shareholders.