Please ensure Javascript is enabled for purposes of website accessibility
Log In Help Join The Motley Fool
Free Article Join Over 1 Million Premium Members And Get More In-Depth Stock Guidance and Research
By Lee Samaha - Aug 7, 2018 at 8:08AM

The blue-chip industrial is relying on its weakest segment in order to hit its implied target for 2020.

There's no way of avoiding it. General Electric Company's (GE 0.72%) power segment performance is the most important factor in deciding whether you should buy the stock. Simply put, a recovery in the ailing power segment is critical to the company meeting its implied targets for the next few years. Here's why and what you need to know about GE Power before buying the stock. 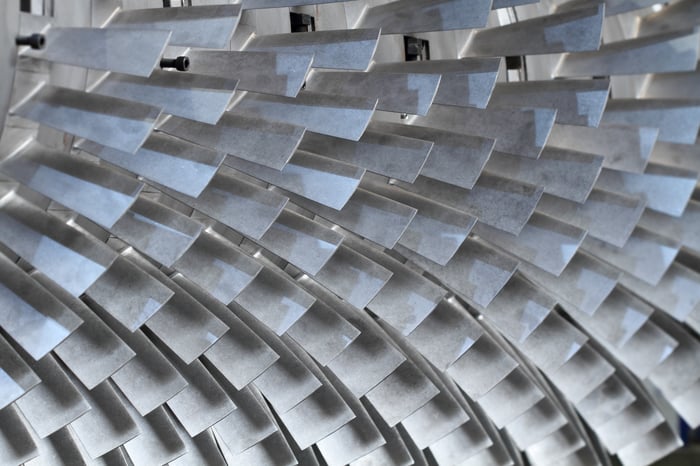 To fully understand why power matters so much, you need to go back to the changes announced in the company update at the end of June. In a bold and decisive step, GE's management decided to shore up the balance sheet by reducing net debt by some $25 billion. The company will use a variety of means to do this, including transferring $18 billion of debt and pension obligations to GE Healthcare, which will then operate as a stand-alone company.

The debt-reduction plan was outlined as follows. A net debt/EBITDA ratio of 2.5 or below is typically seen as suitable for investment-grade debt by credit rating agencies.

The good news is it's highly likely that GE will be able to reduce debt by $25 billion in accordance with the plan. On top of the transfer of $18 billion in debt to GE Healthcare, GE will also monetize its stake in Baker Hughes, a GE company, and its 9.9% holding in Wabtec generated from the GE Transportation/Wabtec merger.

There's also the 20% of GE Healthcare that GE will monetize (the remaining 80% will go directly to GE shareholders) and the approximately $10 billion in cash proceeds from the $20 billion worth of asset sales GE is making.

Why GE Power matters so much

That said, it isn't just about debt reduction, because GE also needs to improve EBITDA. In fact, the plan for net debt/EBITDA of around 2.5 times in 2020 implies EBITDA of $10 billion in 2020.

Analysts immediately seized on this during the question-and-answer segment of the call, and most of the questions focused on GE's EBITDA and free cash flow profile in 2020. This is particularly important given the fact that Healthcare will no longer be part of GE, nor will the $20 billion worth of assets sold (worth around $1.5 billion in EBITDA). In fact, the new GE will be focused on power, renewable energy, and aviation.

For a flavor of the task at hand, here's a look at industrial segment profit for the last two years -- note the large drop in power profits.

In response to questioning, CFO Jamie Miller pointed out that the EBITDA implied in the figures above is only a rough number and stressed that GE had the resources to reduce debt -- this is probably to reassure investors that the reduction in the net debt/EBITDA ratio is not contingent on EBITDA performance alone.

That's a good thing, because the pathway to $10 billion is uncertain. Miller promised to go through the math and give a comprehensive financial forecast during GE's outlook meeting in the fall. While the exact details will come in the fall, it's clear from her commentary in June that a turnaround in GE Power is a major part of GE's plans. Regarding power, Miller said, "we expect improvement over the next 2 to 3 years" and "over the next couple of years from a cash perspective, we do expect significant improvement at Power."

Indeed, it's GE's stated aim to get the power segment margin back above 10% in the next few years, as compared to the meager figure of 4.7% in the first six months of 2018.

The problem with power

Unfortunately, turning power around is easier said than done. Once again, management lowered expectations for end-market gas turbine demand during the second-quarter earnings call. This comes after a first-quarter wherein the implied power segment full-year profit guidance was taken down by a whopping $500 million.

Miller has promised a detailed financial outlook in the fall, and cautious investors will want to wait to see what's said on it before making aggressive moves on the stock. In addition, it wouldn't be surprising to see the company cut its 2018 guidance given the trend in its earnings.

A turnaround in GE Power is a key part of the company's plans, but as yet, end-market conditions continue to deteriorate and there's a lot of work to do before GE meets 2018 power segment guidance, let alone what the company might expect out of 2020.