Analyzing what GE has to do in the second half of 2018 in order to meet its own expectations, and why it matters in the long term.

If analyst consensus is a useful guide to investors' expectations, then the market doesn't think General Electric Company (GE 2.27%) can meet its earnings guidance. The consensus is for $0.95 in earnings per share in 2018, when GE's management is guiding toward an adjusted EPS range of $1 to $1.07. While it's important for investors not to get too caught up in near-term earnings movements, it's important for GE to make some improvement over the next couple of years, particularly in its core power segment.

An improvement in margin and earnings at GE Power --the key swing factor in meeting guidance expectations -- is an integral part of GE's plan to reduce its net debt-to-earnings ratio by 2020. GE needs to reduce debt and increase earnings in order to convince debt rating agencies not to cut the company's credit rating. A lower credit rating implies higher interest rates on debt, and that's the last thing GE needs. As GE jettisons stable cash-generating businesses like healthcare and works toward becoming an aviation, renewable energy, and power company (businesses that tend to require large up-front investments in technology), it will need cash to invest in new products.

Moreover, there are fears that the demand for gas turbines (GE Power's core product) is facing a long-term structural challenge from the increasing use of renewable energy for electricity production -- driven by the falling cost of storage and producing energy from renewable sources.

Simply put, the power segment needs to start performing in line with management's expectations. And for the second half of 2018, that seems unlikely to happen. 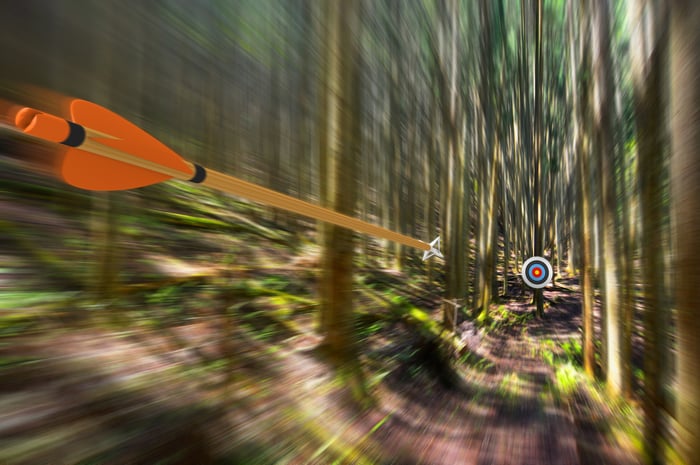 Unfortunately, GE's management has been nudging down expectations as 2018 has developed. For example, going back to the first-quarter earnings presentations in April, CEO John Flannery reiterated what CFO Jamie Miller had already told investors in February: that GE's full-year earnings were likely to come in at the low end of the $1 to $1.07 range.

Given that management reduced the implied power-segment earnings guidance by some $500 million (worth about $0.05 of EPS), it was hardly surprising to see management lowering overall EPS expectations. But it was puzzling that the free cash flow (FCF) 2018 guidance of $6 billion to $7 billion was left untouched.

Fast-forward to the second-quarter earnings presentations, and management maintained EPS guidance but took full-year FCF guidance down to $6 billion, largely on the back of deteriorating performance in the power segment. Whichever way you look at it, GE's earnings and FCF trends have become worse in 2018, which raises questions about its ability to reduce its debt-to-earnings ratio by 2020.

A closer look at GE's segments

GE's management doesn't go into segments in great detail on a regular basis, but here are the numbers implied from Flannery's outlook given at the Electrical Products Group (EPG) event in May compared with the implied guidance given in the November 2017 update.

I've included the other major segments, healthcare and aviation, so investors can gain a flavor for what GE needs to do and to show why GE Power really is the swing factor here.

It's important to note these figures are only rough estimates, so it makes sense to allow for some variance when making your own revenue and margin calculations. GE is going to have a hard job meeting its power segment guidance. In addition, the hope that strength in aviation and healthcare will fully offset weakness in power and lead to GE meeting its overall guidance is unlikely to be realized, in my opinion.

Here are my rough calculations for what GE Power needs to do in the second half in terms of revenue and the margin needed to meet guidance.

Back in November, management estimated that the segment's organic revenue would decline 10% in 2018, but reported revenue was down 15% in the first and a whopping 19% in the second quarter.

As you can see above, this would mean that power margin is going to have to expand significantly in the back half in order to meet the implied segment guidance.

GE's stated aim is to get power margin above 10% in the next few years, and investors will be closely watching progress on the matter -- not least because end market conditions appear to be worsening. For example, the management of key rival Siemens recently outlined expectations for a margin decline in its power segment in 2019. Moreover, Siemens is expecting gas turbine demand to remain weak for the next couple of years

What GE investors need to look out for

Management's plan is to increase the power segment margin in the face of weak end markets for the next few years. As such, investors will be focusing on margin in 2018 in order to ascertain whether GE's mid-to-long-term plans are viable.

This isn't just about a few cents of earnings either way in the next six months. GE has made power margin improvement an integral part of its financial plans and investors will want to see a couple of quarters of solid improvement on the matter before feeling fully comfortable in buying the stock. If there isn't any improvement, then investors will have to revisit their long-term assumptions for earnings and cash flow generation at GE.