As the owner of the world's best-selling Scotch whisky, Diageo (NYSE:DEO) generates most of its $16 billion in annual revenue from the Johnnie Walker brand, which it has translated into successful extensions, such as its Jane Walker whisky, marketed to women, and White Walker, the Game of Thrones-inspired whisky.

With other spirits in its portfolio now almost wholly at the premium or superpremium level after the sale of its value portfolio to smaller rival Sazerac, let's look at whether Diageo's stock is one an investor would want to buy. 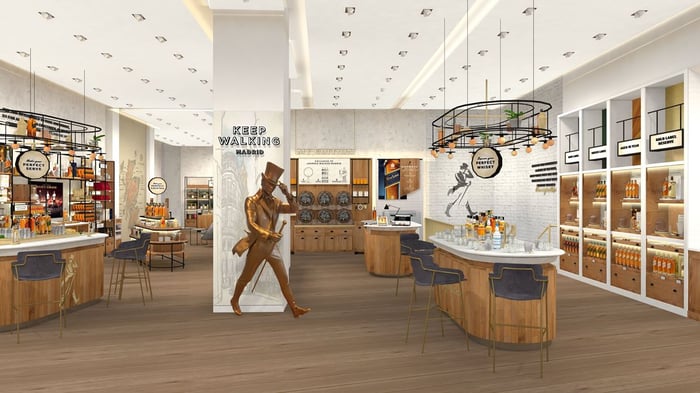 Spiriting away the doubts

The U.S. remains Diageo's largest market, and though revenue growth wasn't as strong here as it was in some other countries, net spirit sales still rose 5% over the first six months of its fiscal year, which ended Dec. 31, in part helped along by Johnnie Walker sales rising 9% on the strength of the White Walker introduction.

Although leading premium labels such as Bulleit rye and Crown Royal Canadian whisky show the depth of its bench, Diageo continues to shine with Scotch whisky, which saw sales rise 10% for the period.

Equally important may be that vodka sales finally stabilized. While the spirit has been in decline for some time, Diageo was able to staunch the hemorrhaging and reported sales were flat for the first six months of its fiscal year. The Smirnoff and Ciroc brands were down, but Ketel One soared 22% as it launched a new Botanical extension that was well received.

Diageo also scored strong gains in both tequila and beer, with its superpremium Don Julio and Casamigos generating double-digit growth in the former category, and Guinness notching 13% gains in the latter.

Still, scotch remains the straw that stirs the drink, accounting for 27% of total sales. But because vodka represents another 11% (making it the second biggest category), it's key that sales have flattened. The continued decline in several brands is worrisome since the enthusiasm for the new Botanical product will likely eventually fade and the category remains weak.

The premiumization trend in alcoholic beverages is picking up steam, particularly abroad, where surveys show premium spirits now account for over half the total spirits volume. Arguably started with the rise of craft beer in the U.S., craft distilling is now spreading, and consumers are showing they're willing to pay up for a better product.

Diageo has long had a close association with premium and superpremium spirits, but its decision to sell off almost all of its value portfolio was a significant bet that the trend is not a fad and will extend well into the future.

It has positioned itself as the premium distiller amid a market where data from Nielsen last year showed high-end spirits account for 62% of dollar sales, with ultra-premium spirits growing fastest. Being the biggest and best in a field that's expanding has its advantages.

...and a premium price worth paying

Diageo's ability to stay on top of the market has also paid off with a rising stock price that is up 12% in 2019 and 20% higher over the past year. That gives it a multiple of almost 25 times trailing earnings and 21 times next year's estimates, which isn't grossly overvalued. But it does trade at 60 times the free cash flow it produces, which is certainly a top-shelf valuation.

Diageo's chairman Javier Ferran seems to have the knack for picking the right spots to buy company stock. He spent $1.3 million in December just before the distiller's latest growth spurt, which has earned him a 13% return so far. Over the past few years, he's made several prescient purchases, and having dropped some $6 million on Diageo stock over two years' time, he's indicated he's bullish about its future.

Considering its preeminent position, that's a smart call. Investors may want to emulate his confidence in the company.