Please ensure Javascript is enabled for purposes of website accessibility
Log In Help Join The Motley Fool
Free Article Join Over 1 Million Premium Members And Get More In-Depth Stock Guidance and Research
By Adam Levy – Updated Apr 14, 2019 at 9:38AM

If Square wants more large sellers, it has to spend like the big payments processors.

Square (SQ -1.63%) loves to boast about how efficient its marketing is.

On the company's latest earnings call, newly installed CFO Amrita Ahuja pointed to the company's three- to four-quarter payback period for new merchants. That's improved from a couple years ago, when management used to say it was four to five quarters. Square is seeing a positive return on its marketing dollars in less than a year now.

Ahuja also told analysts over 80% of large sellers -- an increasingly important piece of Square's business -- self on-board. In other words, they hear about Square through word of mouth or brand advertising and go to the website and sign themselves up without much effort on Square's part to sell to them.

These are the companies Square is competing against for large merchant accounts, and it might need to spend more to win them. 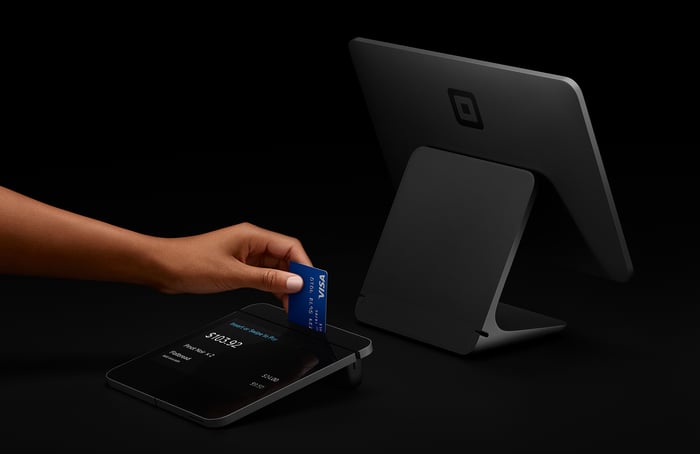 Growth in its core transaction-based revenue is slowing despite Square expanding to more large merchants and introducing several new pieces of hardware and software for accepting payments over the past year. MoffettNathanson analyst Lisa Ellis described that trend as "counterintuitive," saying Square needs to do more to get its products into merchants' stores, particularly larger merchants.

Just 24% of Square's payment volume comes from merchants using Square for over $500,000 in annual payment processing. While the company has shown steady improvement in attracting large sellers, they represent a massive opportunity. Square's management even says its goal is to invest in order to take advantage of that opportunity.

Square's competitive advantage over companies like First Data or Global Payments is that it offers an ecosystem of tightly integrated services. Instant Deposits, Payroll, Appointments, Invoices, specialized management software for various verticals, and loans through Square Capital are all tied to Square's core payments platform.

With this growing ecosystem of ancillary services that could be particularly valuable to larger merchants with multiple locations and employees, Square can compete more effectively on pricing with First Data or Global Payments. Meanwhile, the volume of transactions and the number of services larger merchants take should make them more valuable than Square's average merchant. That's an opportunity worth pursuing with additional sales and marketing.

Another factor worth considering is that larger merchants will have a harder time switching providers. That means Square might have to work harder to win their business, but their lifetime value as a customer could be much greater than average.

Square seems reluctant to spend money on marketing and allow its payback period to move back out over a year. But if it truly believes in the long-term opportunity of its payments system and ancillary services, it should take the initiative to get its products into more larger merchants. First Data and Global Payments are growing more slowly than Square, but spending heavily to keep their positions with large sellers. Square can't expect to keep growing mostly by word-of-mouth indefinitely.