General Mills (GIS -0.55%) revealed positive organic growth and an improving bottom line in its fiscal third-quarter 2019 report (the three months ended Feb. 24). The packaged foods giant's top line benefited as expected from the acquisition of Blue Buffalo Pet Products in April 2018. However, the company surprised investors with robust margin growth, sending shares up as much as 4% in the trading session following the earnings release on Wednesday.

Note that all comparison numbers in this article refer to the prior-year comparable quarter (the third quarter of fiscal 2018). 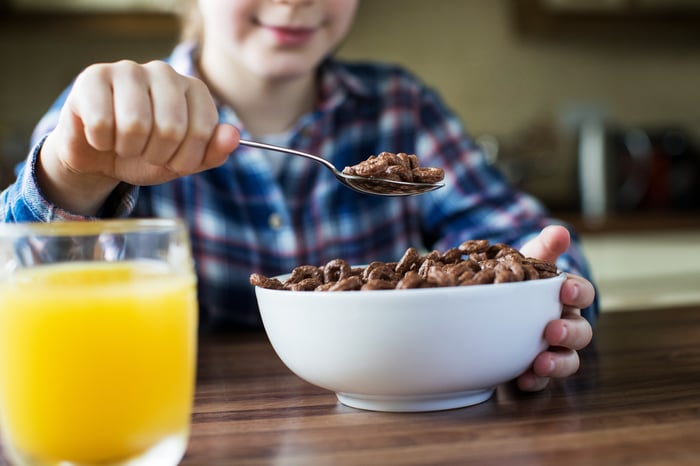 In General Mills' earnings press release, CEO Jeff Harmening discussed the key drivers of the favorable earnings report, and discussed the company's outlook for the remaining quarter of the fiscal year:

We had a strong third quarter, with positive organic sales growth and significant operating margin expansion. Our year-to-date performance and fourth-quarter plans give us confidence that we will meet or exceed all of our key fiscal 2019 targets. For the full year, we now expect adjusted diluted EPS and free cash flow conversion will exceed our initial targets, net sales will finish toward the lower end of our guidance range, and adjusted operating profit will finish toward the higher end of the range. Our improved execution and strengthened performance this year reinforce our view that a balanced approach to top and bottom-line growth, centered on our Consumer First strategy, will drive long-term value for our shareholders.

Similarly, year-over-year net sales growth is now expected to hit the bottom of the 9% to 10% projected expansion range (in constant currency terms).

Conversely, earnings expectations have shifted to higher ground. Management anticipates that full-year adjusted diluted EPS will now be flat or improve 1% against the $3.11 earned last year (in constant currency terms), versus prior guidance of flat earnings or a decline of up to 3 percentage points. Given the full fiscal year revisions, shareholders appear pleased that promised bottom-line momentum has appeared to support the revenue boost attained from the Blue Buffalo acquisition.