How wide are the moats for these healthcare growth stocks?

Thanks to scientific breakthroughs, we're living in an age of miracles, according to David Gardner, cofounder of The Motley Fool. We'll examine two healthcare companies that are examples of modern-day miracle makers to decide which stock is better positioned today: Illumina (ILMN -2.69%) and Guardant Health (GH -6.54%)

Illumina has made genomic sequencing available to the masses, while Guardant has developed minimally invasive liquid biopsies to detect cancer. While both healthcare companies hold enormous promise in the field of medicine, the question is: Which company's stock is a better buy today? 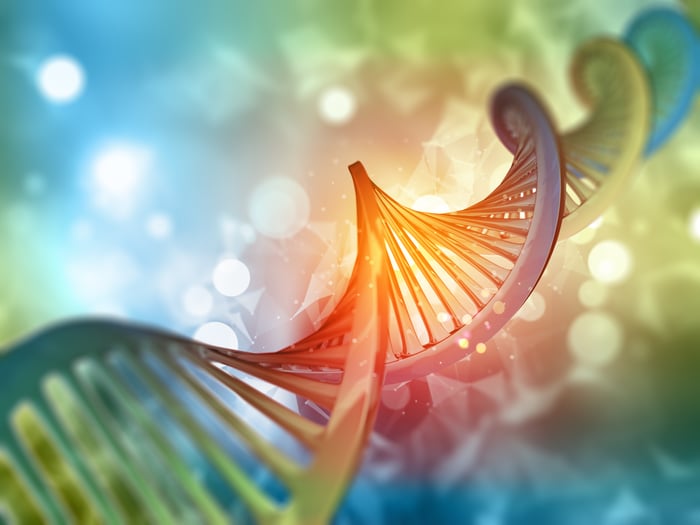 There's no way to answer that question with 100% certainty, but by comparing the two companies on financial fortitude, valuation, and sustainable competitive advantage, we can get a better idea of where they stand in the long run, and which is more likely to pay off.

The first metric is financial fortitude. In the world of biotechnology, this is very important. Lots of companies have exciting ideas that could change the world, but they have little to show for it.

It takes millions of dollars and plenty of time to bring a solution to market. Then once it's on the market, there's the hurdle of getting people to buy your product once, and then keep buying it over time. That's why it's important to monitor a biotech's ability to withstand any economic downturn, like a recession or a company-specific stumble.

Keeping in mind that Illumina is valued at nearly six times the size of Guardant, here's how they stack up financially:

Here we have a clear winner: Illumina. This isn't a serious knock on Guardant -- the company is young and has shown a promising start on the public markets. Its cash position gives it at least a few years before it either needs to be free-cash-flow positive or make a secondary offering. But it can't compete with Illumina's stellar balance sheet and strong free cash flow.

Check out the latest earnings call transcripts for Illumina and Guardant Health.

Next, we have valuation. There's no single number that can tell us if a stock is expensive or cheap, but we can consult a number of different metrics to give us a more holistic picture of its price.

Guardant's early stage and unprofitability makes its valuation difficult to measure with anything other than price-to-sales ratio, which shows it's quite expensive, compared to Illumina. That doesn't mean it's dangerous to buy Guardant right now, or that Illumina is cheap -- with a P/FCF ratio of 48, it's far from cheap. But at least with Illumina you can be sure what you're getting, which gives it the competitive edge over Guardant.

Finally, we have the most important thing to measure: the sustainable competitive advantages -- or the moats -- that protect each company.

Illumina's gene-sequencing machines expedited the process of decoding DNA and made it more affordable. These technologies range from the tiny iSeq machines to massive NovaSeq ones, and they cost between $20,000 and $10 million.

But what if someone came along and developed a better genome system? Would customers leave Illumina behind for a new holy grail? That's where switching costs come in. The company's installed base of more than 11,500 machines gives it a clear advantage of high switching costs. Any hospital or research agency that has forked over big bucks for an Illumina machine wants to reap its full value; There's no need for two machines that do the same thing. That said, when it's time to upgrade, there's no guarantee the competition won't offer something better.

Guardant Health offers liquid biopsies for cancer detection. Recently, the company's Guardant360 blood test has been winning over investors. But the Lunar-1 and Lunar-2 blood tests -- which could be used for early detection in otherwise-healthy patients across the world -- really give the company a huge market. But that doesn't mean there's a wide moat. Regulatory approval won't come easy, and the company could get beat by a competitor bringing something better to market in the meantime.

Guardant Health's real moat is in the data it collects. Because it is the first mover in this nascent space, it can collect more data to interpret and offer feedback to doctors, far superior to offerings from its peers.

That said, I'm not terribly impressed with either company's moat. Illumina's installed base is strong, but there's nothing to keep customers coming back when they upgrade. And Guardant has a head start on data, but it's too early to tell how much of a differentiator that might be.

Both of these are very exciting companies doing important things in healthcare. While both have some semblance of a moat, I'm not too enthralled by the prospects of either, although Illumina gets the nod here thanks to its financial fortitude and valuation.