Sometimes the most ambitious path to take is the one you're already following.

Last month, during PepsiCo's (PEP -0.50%) fourth-quarter 2018 earnings conference call, and again at the Consumer Analyst Group of New York (CAGNY) conference on Feb. 20, new PepsiCo CEO Ramon Laguarta expressed his vision for the beverage and snacks conglomerate. Any shareholders looking for a swift restructuring of core segments, or a major upcoming business transaction, were left with decisively extinguished hopes.

Laguarta's most important communication, after an intensive four-month review of strategy with key management team members, is that PepsiCo doesn't currently "see the need to shed or acquire businesses in any significant way."

Instead, the CEO has chosen to focus on a multiyear program of business optimization, expressed broadly and literally as "faster, stronger, better."

As I observed in an analysis last December, Laguarta indeed had options to enact drastic change via a potential split-up of the beverage and snacks businesses, or via a mega-merger, in order to rapidly increase shareholder value.

As it is, Laguarta believes the best method by which PepsiCo can enhance shareholder value is to accelerate top-line growth. He's set a rather aggressive 4% to 6% annual revenue expansion target -- aggressive for a multinational in the consumer packaged goods (CPG) industry, that is.

Personally, I'm ambivalent regarding the "faster, stronger, better" mantra. As a business phrase, it's likely effective in distilling a more elaborate strategy into generalities the entire PepsiCo employee base can rally around. And certainly, it pithily communicates the organization's ongoing approach to shareholders.

On the other hand, the expression borders on the uninspired and cliche. For investors of a certain age, it will evoke the famous tag line of the Six Million Dollar Man (aka "The Bionic Man") TV serial from the 1970s: "We can make him...better, stronger, faster." And younger PepsiCo acolytes will undoubtedly hear in the line an echo of Daft Punk's electronic music standard: "Harder, Better, Faster, Stronger."

In substance, though, the marching orders make sense; let's walk through them below.

Check out the latest earnings call transcript for PepsiCo.

"Faster" refers primarily to top-line expansion, which the company seeks to achieve through three methods: exploiting localized sales opportunities, shoring up and strengthening its North American businesses, and speeding up international expansion.

PepsiCo's biggest lever in this endeavor is to increase the revenue of its largest profit driver, Frito Lay North America, or FLNA. FLNA's offerings run the gamut from indulgent snacks (which management likes to recast as "permissible" snacks) to healthier, clean-ingredient labels. A priority -- which must be daunting to the segment's competitors -- calls for increasing FLNA's manufacturing capacity, which Laguarta believes has been constrained in some instances.

Similarly, the company intends to spur growth in the lagging North America Beverages (NAB) segment, the company's largest division by revenue (it lags FLNA in profit).

In addition, the principle of "faster" rests on a greater level of customer immediacy, which the company calls "consumer centricity." LaGuarta wants PepsiCo to answer four basic needs of its customers, as illustrated in the following chart presented at the CAGNY conference: 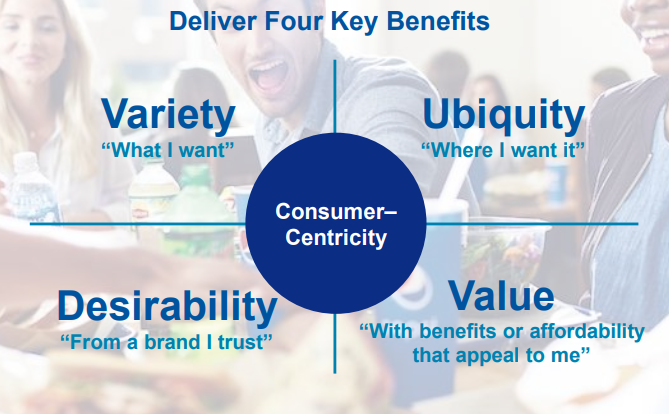 Companywide, more effective distribution and higher capacity will intensify as key priorities to making the organization stronger. Strength will also derive from closer management attention to cost. At the CAGNY conference, Laguarta spoke of the need to "elevate cost to a much more strategic role in the company."

Laguarta insists that management at all levels of PepsiCo must be more attuned to the reality that not all capabilities or costs are equal. He's promised that decision-makers will be sensitive to the understanding that PepsiCo needn't always pay for best-in-class in systems and services -- in many cases, the company should be willing to pay for "good enough." 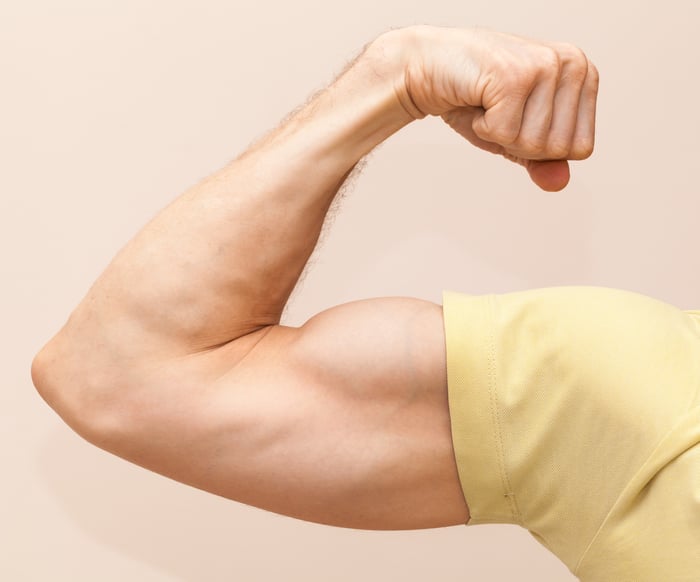 For Laguarta, this means further investment in supply-chain capability and flexibility, better go-to-market capability, and next-generation technology. At the CAGNY conference, the CEO mentioned personalized product pricing unique to each consumption occasion as an example of technology in development that PepsiCo believes will improve brand loyalty and its own profits.

PepsiCo is chasing the idea of "better" not necessarily in terms of improvement -- that ambition is amply covered in "faster" and "stronger." Rather, better refers to notions of environmental impact, the stewardship of resources (i.e., sustainability), and holding a corporate purpose beyond increasing margin and cash flow.

Laguarta argues that the company's acquisition of SodaStream last year illustrates the concept of better. PepsiCo purchased a company that exists outside the bottle: SodaStream's dispensing system has a fractional waste footprint versus the millions of tons of plastic that PepsiCo creates each year.

Of course, better also suggests the development of a stronger and more purposeful culture. Here, LaGuarta is continuing the work of his predecessor, Indra Nooyi, who pushed sustainability, healthier product innovation, and programs to assist women in the developing world during her tenure.

Ramon Laguarta's blueprint for one of the world's largest CPG companies is devoid of immediate fireworks, and its narrative elements lack a bit of inspiration. Nonetheless, the decision to adhere to the basic elements of Indra Nooyi's steady growth and high-shareholder-return business structure is fairly bold: It depends on execution to produce results, and this is clearly harder to achieve than a mammoth acquisition or spinoff.

And yet this customer-centric strategy is also shareholder-centric. PepsiCo's investors aren't necessarily looking for a moonshot -- they welcome the company's dependable and generous cash flow. This year, PepsiCo will return approximately $8 billion to shareholders via dividends and share repurchases. And investors appreciate that the company's dividend has grown at a compounded annual growth rate, or CAGR, of 9% over the last seven years.

Thus, if LaGuarta and his management team can nudge PepsiCo's low-single-digit annual revenue growth to the 4% to 6% range via process changes and small, tuck-in acquisitions, stakeholders may well embrace the merits of faster, stronger, and better.

Is Pepsi an Excellent Defensive Dividend Stock to Buy in 2023?
420%