PepsiCo's (NASDAQ:PEP) new CEO, Ramon Laguarta, hasn't yet disclosed his plans for the sprawling snacks and beverages conglomerate, but it's never too soon to begin speculating. Laguarta obtained the executive seat on Oct. 3, following Indra Nooyi's retirement after 12 years at PepsiCo's helm.

A 22-year veteran of PepsiCo who most recently held the title of president, Laguarta gained valuable experience leading both the company's Europe Sub-Saharan Africa and Eastern European businesses. He's inherited an organization that, under Nooyi, has made substantial, if not linear, progress toward diversifying away from legacy sodas into healthier beverages. Nooyi has also successfully revamped PepsiCo's packaged food lines as consumers increasingly lean toward cleaner ingredient labels, while still exhibiting a remarkable weakness for indulgent, salty snacks.

Laguarta will have to formulate whether to maintain the steady growth, moderate-risk recipe Nooyi and CFO Hugh Johnston employed, which included stabilization of the beverage business, low to mid-single-digit growth in snacks, and a steady cadence of small, bolt-on acquisitions to supplement revenue expansion. 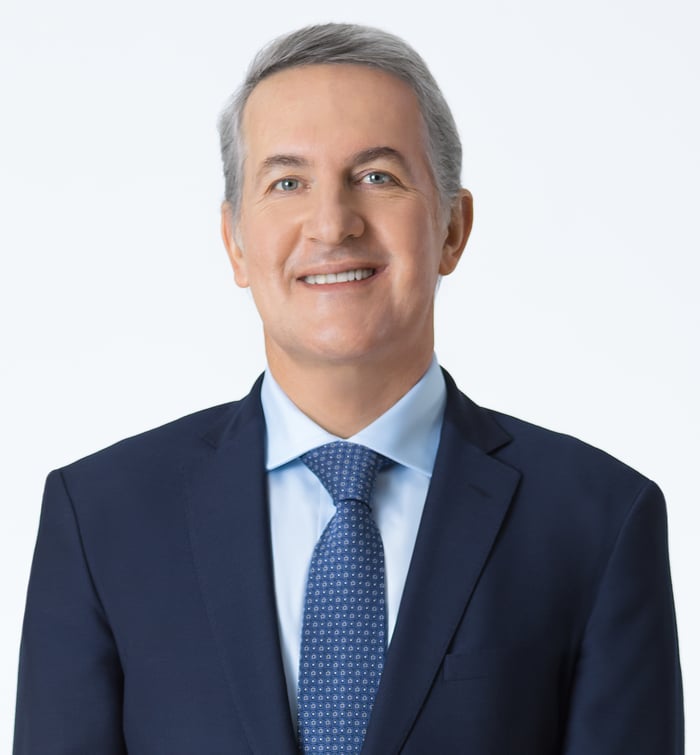 In another example of Nooyi's distaste for disruptive exercises aimed at value creation, the company shook off a challenge in 2013 from activist investor Nelson Peltz, who agitated to merge PepsiCo with snacks competitor Mondelez to create a snacks colossus. Part B of Peltz's plan involved subsequently spinning off the beverages business to more effectively compete against Coca-Cola. One of Nooyi's favorite phrases at the time, that PepsiCo's snacks and beverages businesses were "better together," has proven difficult to contradict: PepsiCo's annual total return has averaged a market-beating 19% over the last 10 years.

This isn't to imply that PepsiCo doesn't invest in force when the appropriate occasion arises, as illustrated in its recent purchase of SodaStream International for $3.2 billion in cash (the deal is expected to close in January 2019). However, this transaction counts as an outlier from PepsiCo's normal mergers and acquisitions (M&A) strategy due to its large size.

During PepsiCo's third-quarter 2018 earnings conference call on Oct. 2, 2018 (Nooyi's last day as CEO), CFO Johnston explained that SodaStream represented a unique opportunity for the company to enter a completely new market (in-home beverages), and that it should be viewed as a one-off transaction rather than the beginning of a new trend. Johnston signaled that PepsiCo would soon return to its practice of engaging in smaller acquisitions, in the range of $500 million or less.

Early tea leaves indicate that Laguarta may espouse his predecessor's strategy. On Oct. 31, PepsiCo entered into an agreement to purchase small but rapidly growing superfoods company Health Warrior, which markets plant-based snacks, for an undisclosed sum. This is the company's first purchase within a new entity it's created called PepsiCo HIVE, which seeks to acquire emerging brands and scale them using PepsiCo's marketing and distribution muscle.

Contemplating a bolder course of action

Setting status quo aside, should Laguarta seize this opportunity to introduce more risk into PepsiCo's earnings, to achieve higher rates of financial returns for shareholders? He's assuredly observing a current example of such a course. In a little less than a year and a half after assuming the role of CEO from Muhtar Kent, Coca-Cola's chief executive James Quincey has already initiated daring uses of capital, including a $5.1 billion purchase of retail coffee chain Costa Coffee from Whitbread plc.

Quincey has also led Coca-Cola to a stake in sports drink upstart BODYARMOUR, and completed a flurry of acquisitions in the last three months, snapping up a kombucha maker and a high-protein smoothie specialist, among other deals.

Between Coca-Cola's refranchising and its M&A spree, investors' interest in the world's largest non-alcoholic beverage company has been rekindled this year. After two lackluster years during which Coca-Cola shares posted a 14% cumulative total return (PepsiCo achieved a 27% total return over the same period), "KO" stock has gained nearly 12% on a total return basis year to date, against a 1% increase for PepsiCo shares.

One can't fault Laguarta if he feels a strong tug to similarly shake up PepsiCo's stock through risk-oriented, decisive action. Yet the company has performed well in the last decade thanks to its steady-state formula -- not in spite of it. A business model that favors new brands and portfolio diversification has created extremely stable revenue streams. Investors appear to prize PepsiCo's $6 billion in annual free cash flow -- much of this flows back to them. The company is on track to return $7 billion to shareholders this year between $5 billion in dividends paid and $2 billion in share repurchases.

As Coca-Cola takes on more risk, PepsiCo may end up sticking with a formula of incremental returns that allows it to meet high dividend and share buyback expectations. We'll have insight after the turn of the year, as PepsiCo reports its fourth-quarter earnings in early February, and CEO Laguarta conducts his first earnings conference call.