PepsiCo's (NASDAQ:PEP) shareholders know well the company's mission to transition its beverage portfolio to one that's less reliant on sweetened carbonated beverages and more attuned to current customer tastes. But executing this strategy provides an ongoing challenge, and the organization's fiscal third-quarter 2017 earnings report, released last week, demonstrated this complexity. PepsiCo reported disappointing numbers in its North America Beverages (NAB) operating segment, a result of inadvertently pitting brands against each other in a manner which proved detrimental to the company's top line.

NAB has booked flat or slightly positive results over the last several quarters, as gains in its still (noncarbonated) portfolio have offset weak soda volumes, so the pronounced negative results raised eyebrows. In the third quarter, management pointed to three specific culprits for the dip in volume and revenue: 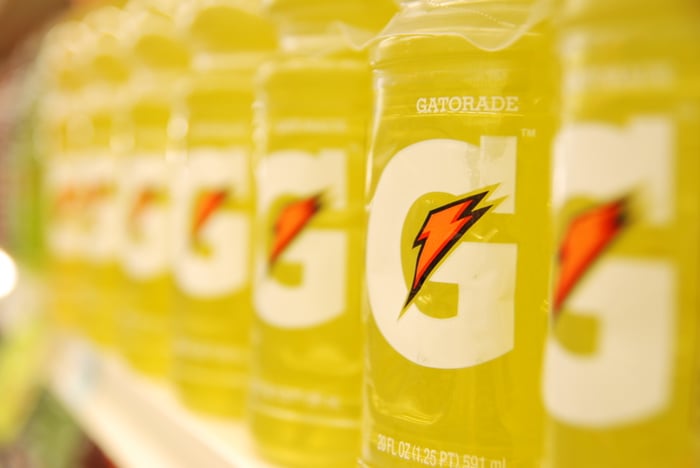 CEO Indra Nooyi summed up the misfire during the company's earnings call with analysts:

[C]learly, we redirected some big brand space to these new products as opposed to focusing on new incremental space. We view both of these conditions as temporary and not structural, and we fully expect top line performance to improve in the coming quarters.

We have a good handle on what happened, and we are making immediate adjustments to get the business back to growth. We are stepping up marketing spending on Pepsi and Mountain Dew, including our zero- and low-calorie products under these trademarks.

To translate, PepsiCo gave up shelf space designated for Pepsi and Mountain Dew to push newer non-soda brands, but customers didn't bite. PepsiCo competed against itself and lost. In the last quarter of this fiscal year, the company will redouble efforts to make sure that its big carbonated brands are front and center on convenience store shelves.

PepsiCo's experience illuminates a stark reality underlying its beverage portfolio transition. Customers are turning to healthier drink choices, so soda consumption is dwindling, but a very significant core demand for soft drinks still exists, and ignoring it even for one quarter can punish results.

It also demonstrates the limitations in introducing promising new brands like LIFEWTR, a purified, pH-balanced, electrolyte-enhanced water beverage. LIFEWTR, launched this February, will likely hit $200 million in sales this year, which means that it has long-term potential to join PepsiCo's existing portfolio of 22 "billion-dollar brands." Should marketing resources and retail space tilt toward products like LIFEWTR or vulnerable yet essential brands like Diet Pepsi?

In the near term, still labels like LIFEWTR will have to settle for being high, but not ultimate, priorities. But as Nooyi hints above, even as mammoth brands in decline receive their due shelf space, the company can still divide some of that real estate into variants more acceptable to contemporary consumers, like the modestly successful Pepsi Zero Sugar.

Shareholders were largely appeased by management's characterization of NAB's performance this quarter as a one-off slipup which can be quickly righted. But we can be reasonably sure that another quarter of mid-single digit volume decline in NAB will be met with significant investor concern.

And this really is the crux of the matter when I say that the execution of PepsiCo's portfolio transition strategy is complex. Wall Street and shareholders alike expect the company to show beverage volume expansion and organic revenue growth every quarter. Every quarter, the company must present a menu of choices to consumers in grocery stores, C-stores, and other retail channels that hits just the right drink mix between contemporary healthy refreshment and old-school, syrupy sodas.

The company's penchant for innovation signals that it will eventually succeed in being associated more with juices, waters, energy drinks, and bottled coffees and teas than with soft drinks. But its most recent quarter proves that such a day is yet some years away.