At the Consumer Analysts of Greater New York (CAGNY) conference last month, PepsiCo Inc. (NASDAQ:PEP) used its presentation time to discuss the success and future opportunities of its second-largest segment, snacks giant Frito-Lay North America, or FLNA. Propelled by the popularity of brands like Lays, Doritos, Cheetos, and Fritos, FLNA has posted 3% annual organic growth over the last three years, to become one of PepsiCo's most dependable sources of revenue growth. It also generates enviable margins: While responsible for 25% of total PepsiCo revenue, FLNA contributes an outsize 42% of total operating profit.

During the discussion led by FLNA president Vivek Sankaran, some analysts asked about the recent struggles of PepsiCo's largest business, its North America Beverages (NAB) segment. Sankaran didn't respond in detail -- after all, it's not his division -- but as he extolled Frito-Lay's advantages, three specific weaknesses in NAB's business were thrown into relief. Let's explore FLNA's winning attributes, and how they reveal hurdles faced by PepsiCo's mammoth beverage enterprise. 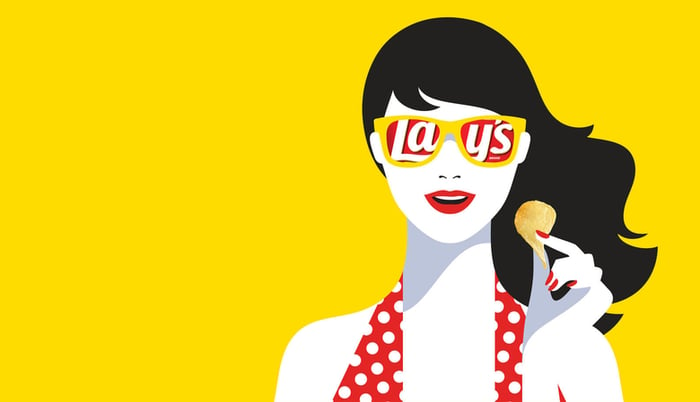 A few years ago at a dinner party, my good friend Kim, one of the healthier people in my orbit, explained her vexation with a subtle change then appearing in gourmet recipes on popular culinary websites. She claimed that classic dishes were being compromised by a perceived need to cut back on harmful ingredients. When one of us innocently pointed out that losing a smidgen of flavor in the interest of health might constitute a reasonable trade-off, Kim pounded her fist on the table, and said emphatically: "Salt is never an 'option.'"

I've often thought about this pithy declaration. I found it a liberating principle at the time, but it's also returned to me as I've watched the success of salty snacks in the consumer packaged goods (CPG) industry, even as sales of sugary carbonated beverages have tanked. As consumers, we've sensibly realized that too much sugar impacts our well-being. Yet we still possess an elemental reverence for salt, and we're less inclined to vilify it as an ingredient in our snacks of choice.

For several years, privately held research group Information Resources has tracked the rise of salty snacks, which it groups in a market category it calls "core indulgent." Core indulgent revenue in the overall CPG market grew at a pace of nearly 3.4% last year, handily outpacing the "core healthier" category's growth of 0.9%, according to the researcher's data. Salty-snacks revenue expanded at the brisk rate of 4%.

Thus, FLNA is selling into a market sweet spot (or a salty spot if you will). Sprawling, slow-growth CPG conglomerates are rushing to acquire the means to this type of expansion. Just look at the $5.5 billion worth of deals announced in December -- The Hershey Company bought Amplify Snack Brands Inc. and Campbell Soup Company scooped up snack manufacturer Snyder's-Lance Inc.

In dissecting FLNA's performance, Sankaran acknowledged some legacy advantages decades in the making. Chief among these is the segment's category dominance. Per PepsiCo, FLNA owns the top seven brands in the salty-snacks category.

More impressively, FLNA wields enviable market share in specific snack types. Take potato chips, for example. In the chart below, of nine leading potato chip brands by sales in 2017, all except Pringles, Cape Cod, Utz, and Kettle Chips belong to FLNA. We can also surmise that the snacking giant has a decent share of private-label sales, worth $448 million.

NAB has never enjoyed this level of market share. In fact, PepsiCo has had to tussle with fellow giant Coca-Cola in one form or another since the 19th century. The beverages side of the business may forever remain in a dogfight, while FLNA enjoys the relatively easier task of protecting its commanding market position.

The ability to blitz major markets through direct store delivery is powerful. Yet being able to refine distribution at a granular level is just as advantageous. And FLNA combs through data to reveal the best inventory reorder points distinct to each convenience or grocery store, thus optimizing sales.

FLNA uses the DSD model partially out of necessity. As Sankaran explained in his presentation, snacks like chips, popcorn, and cookies have limited shelf lives and are fragile to boot -- they don't travel well. So the segment tends to manufacture close to consumers where possible, and DSD allows it to push still-fresh product to retail outlets.

The beverage business, in contrast, employs a number of distribution methods: DSD, distribution to customer warehouses, and the use of third party distribution networks. NAB also sells its products to independent bottlers. Thus, it has somewhat less control over the ultimate endpoints of its product -- and less data to make use of -- than FLNA.

For competitive reasons, PepsiCo doesn't disclose a great deal about its distribution practices, but you can get a sense of the disparities between FLNA and NAB from its listing of manufacturing plants and "other facilities" within the company's recently filed 2017 annual report. The table below is broken down by business segment. "Other facilities" includes warehouses, distribution centers, offices, and storage facilities:

FLNA has 1,680 "other facilities," several times the number owned by NAB, or any other segment for that matter. We can glean from this data that FLNA's direct-store-delivery system relies on a robust infrastructure, which supports Sankaran's claims of its distinct competitive advantage.

Can both segments prosper together?

As we've seen above, FLNA presently holds an easier path to growth than its sibling division. For NAB, portfolio innovation in sync with changing ingredient preferences will remain the best way to overcome current struggles. And finding favor with consumers is crucial: PepsiCo's stock tends to encounter the least upward resistance when both of its two largest divisions record active growth.