China's biotechnology industry is booming. The world's most populous country is going all-in on bringing innovative new drugs to market, flooding the sector with capital, political support, and key talent. China expects its biotech sector to represent 4% of its GDP by 2020, which could be worth $500 billion by the end of next year. With numbers that large, healthcare investors need to take notice.

But biotech has also traditionally been a very risky investment. Stock prices can soar or crash based on the binary outcome of a single drug's clinical trials. Add in the complexity of China -- which has significant cultural differences from the United States, and is less transparent in its financial reporting -- and you see this is a market that's not for the faint of heart.

However, BeiGene (NASDAQ:BGNE) is a Chinese biotechnology company that I believe could be well worth the investment risk. BeiGene has several big-name partnerships, and it enjoys certain advantages that help it navigate clinical trials, and I've personally been a shareholder for about a year. 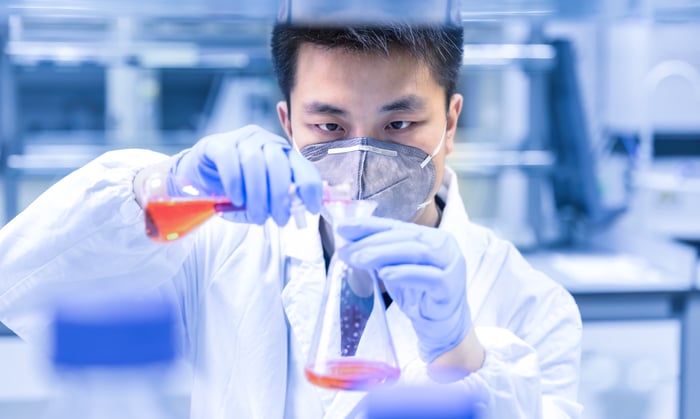 BeiGene is listed directly on the Nasdaq and is partially owned by Celgene (NASDAQ:CELG) (which is in the middle of being acquired by Bristol-Myers Squibb). For U.S.-based investors, a direct American listing and an association with a familiar name take a bit of the China-specific risk off the table. BeiGene's founder and CEO John Oyler is also an American, and his successful track record has made him the first American-born entrepreneur to become a billionaire by founding a company in China.

I personally got a chance to speak with John Oyler at the Wall Street Journal's Tech Health conference. It became clear very quickly that he has ambitions to build a biotechnology company that serves not just China, but the entire world.

Here are three key takeaways from my conversation with Oyler:

"All of the cost in developing a drug is up front. If you do that, you should be trying to get that drug to as many patients as you can.

If there's 4 [million] to 5 million oncology patients in the countries that a big pharma would do trials [in] today, and if China has 4.5 million, you've doubled the size of the clinical patients [group]. And more patients in China are willing to be in a trial. They'll get the best medicine at the best cost. They'll get fully reimbursed not partially reimbursed. You probably have tripled or quadrupled or quintupled the number of patients [who] can now be enrolled in the trial.

If you bring China in, [you can] lower your up-front cost per patient dramatically. And if you're at a low enough cost, then you can pick up a bunch of other countries, maybe another billion patients. You can get your drug to 2 or 3 times as many patients, and most of the cost is up front.

What BeiGene's trying to do is be neither a local company [where] you'd ever be worried about quality, nor a foreign company that doesn't care about having this drug [allow] access and be affordable to patients. We've actually tried to create a whole new category of company and get people to follow us there, where everything has to be world-class quality," said Oyler.

Setting up shop in China has its benefits. China not only has more patients available to participate in clinical trials, but they're also extremely willing and financially supported. Patients didn't previously have access to innovative treatments, so they're eager to be a part of trials that could save their lives. Financially, they receive full reimbursement from the government, which is supportive of companies that develop and introduce new drugs to the country.

About 90% of the company's costs and resources are spent on conducting clinical trials. We've grown accustomed in the Western world to big pharma outsourcing this task to contract research organizations (CROs) such as Charles River Laboratories or ICON. But by running the clinical trials in-house, BeiGene has significantly more control over the process. This avoids several logistical inefficiencies caused by shipping drugs between hundreds of different sites.

BeiGene is attempting to create a new category of company that combines the best of two worlds. Like domestic companies, it wants to build trust with patients and give them firsthand access to the most promising new drugs. And like multinational companies, it wants to set a very high standard for quality to avoid issues arising down the line.

"Being 20% cheaper in trials doesn't matter if you can't get a label in the U.S. or Europe (which then also leads to Russia, Vietnam, Thailand, etc.), which then commercializes you globally. The world is going to be locally operated in China, but with international marketing. In other words, set the bar high to market globally. Be willing to move slower and spend more to get there. You don't cut corners and take risks that you shouldn't, because you're going to pay for them in the long run.

If you're not working at the quality to do that, then you only have China as your market. All of your up-front cost is trying to be amortized over a third of the patients we're going to get to. That's a problem for you. Certainly if you have one quality incident, you're done. You lose the plate, you lose the trust forever," said Oyler.

China provides access to more patients and can amortize the up-front costs more efficiently. But good medicines should be available to patients globally, and more developed countries set the bar much higher than China to approve new drugs.

Even if it isn't needed for the Chinese market, BeiGene is still putting in the extra effort to ensure its drugs can be approved internationally. Broader labeling (approval for a drug to be used in new indications) will provide a better bang for the buck when those drugs eventually get marketed. One example of this is BeiGene's BTK inhibitor zanubrutinib, which is being tested for Waldenstrom's macroglobulinemia, mantle cell lymphoma, and chronic lymphocytic leukemia. Frontline treatments provide the most lucrative markets, and they are worth the extra work.

3. The competitive advantage is the people

"If you take any oncology company in the world, big pharma, biotech, and you ask them "What is the hardest thing to do?", they'll say: "To build a good clinical team. A vision and nice words are easy. But actually building the right leadership, the right teams, in the clinical areas you need that are important is really hard."

There are a very limited number of people who are the right people for the job and with extensive multinational clinical experience. It's also hard to find people who are good at biologic manufacturing operations. There is a short supply of qualified people, which is a structural competitive advantage," said Oyler.

"Building a good team" might sound obvious. But as Oyler has seen firsthand, it is much more difficult to actually pull off.

There are cultural differences between Western countries and China. The right team should be fluent in Mandarin and able to build relationships with local key opinion leaders. But they should also have global experience, to recognize the different market needs in the U.S. and in Europe, and to work collaboratively across multiple continents.

In other words, the skill set required in this industry is quite extensive.

BeiGene found a winner last year in Xiaobin Wu. Previously the general manager of Pfizer China, Wu has 25 years of international pharmaceutical experience (including the past 17 in China). He mentioned during his hiring that he was "impressed by BeiGene's entrepreneurial spirit, the quality of its science and its employees, and its drive to become a global leader in the discovery, development and commercialization of innovative medicines."

It's a huge vote of confidence to see BeiGene attracting industry leaders -- especially when they have decades of experience running the pharmaceutical industry's largest companies.

"BeiGene's goal is to be the company that is the true leader coming out of China. I think we can, and we're well-positioned to do that. It's hard, but we're in a good position," said Oyler.

There are a lot of moving pieces in China's fast-growing biotech market. But BeiGene is focusing and executing well on the most important things, which could prove to be a huge opportunity for investors.