The snack and cereal giant took another small step towards stabilizing sales this quarter.

Investors had expressed growing optimism heading into General Mills' (GIS 1.06%) fiscal third-quarter report. The snack and cereal giant has been struggling with major shifts in demand in its core packaged food business, but its last earnings announcement contained faint signs of a building rebound.

In its business update this week, the company again achieved impressive financial gains, which helped it outperform most investors' earnings expectations. However, it came up short in sales, leading to a growth downgrade by the management team.

More on that declining outlook in a moment. First, here's a look at its headline results:

What happened with General Mills this quarter?

The financial picture brightened considerably, with gains in gross and operating margins combining to push adjusted profits higher. General Mills couldn't find much growth outside of its newly acquired pet food brand, though. 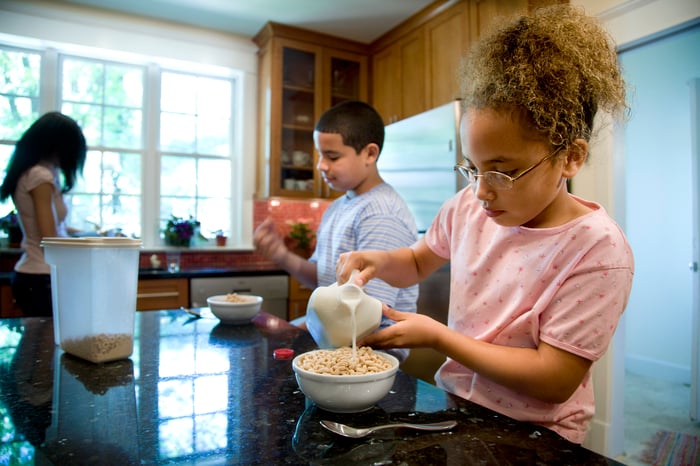 Executives highlighted the big-picture wins in the selling period. "We had a strong third quarter," CEO Jeff Harmening said in a press release, "with positive organic sales growth and significant operating margin expansion."

Management believes the latest trends show that their rebound efforts are working. "Our improved execution and strengthened performance this year reinforce our view that a balanced approach to top and bottom-line growth will drive long-term value for our shareholders," Harmening continued.

General Mills has just one quarter left in its fiscal year, but recent results were volatile enough to prompt updates to nearly all of its 2019 targets. Its financial goals were all lifted slightly, with adjusted operating profit on pace to hit the high end of its 9% to 10% growth target. General Mills also expects to convert just over 100% of its free cash flow into earnings, up from its prior goal of 95%.

The company believes the current quarter will bring a significant sales and profit acceleration in the Blue Buffalo segment, but the outlook isn't as bright for the broader cereal and snack business. That division should land at around flat growth, executives said, or at the low end of their prior forecast.

While the minor sales downgrade is a surprise, it doesn't knock General Mills off of its recovery path. Instead, the snack giant is on track to stabilize its revenue and improve its earnings profile just as it prepares to enter fiscal 2020.