Let's examine one of the top picks in the industrial sector.

Goldman Sachs recently upgraded heating, ventilation, and air conditioning- (HVAC) focused company Ingersoll-Rand (TT 1.03%) to a so-called conviction buy and raised its price target to $122, implying a 15% upside to the current price of $106. Was it a good call? And does the company really have significant upside potential in 2019? Let's take a closer look at the investment case for buying this stock.

The case for buying Ingersoll-Rand stock

The investment thesis for Ingersoll-Rand is based on the following points:

The long-term growth prospects for HVAC -- the climate segment generates more than 80% of the company's profit, with the rest coming from a mix of industrial businesses -- are based on a powerful combination of secular growth prospects. 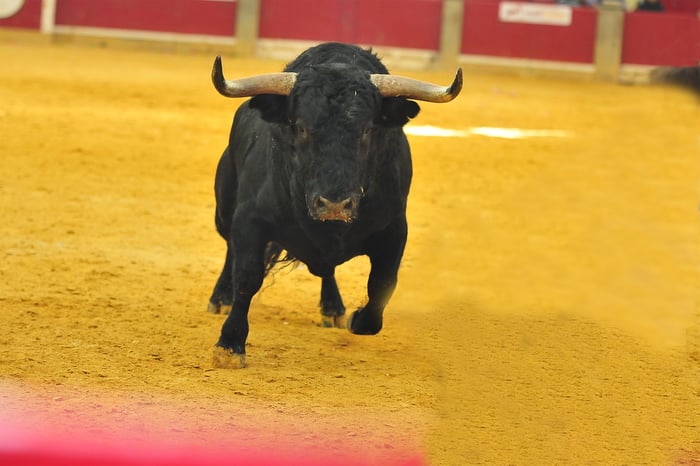 Should you run with the bulls on Ingersoll-Rand stock? Image source: Getty Images.

Earnings trends are on the upswing

In the developing world, there's the shift toward economic growth in hotter countries and increasing urbanization within those countries. There's also a regulatory movement toward what CEO Mike Lamach describes as "greater energy productivity, resource conservation, and environmental sustainability."

All of which suggests management's guidance for organic revenue growth of 5% to 6% (climate segment and total company) is conservative.

Check out the latest earnings call transcript for Ingersoll-Rand. 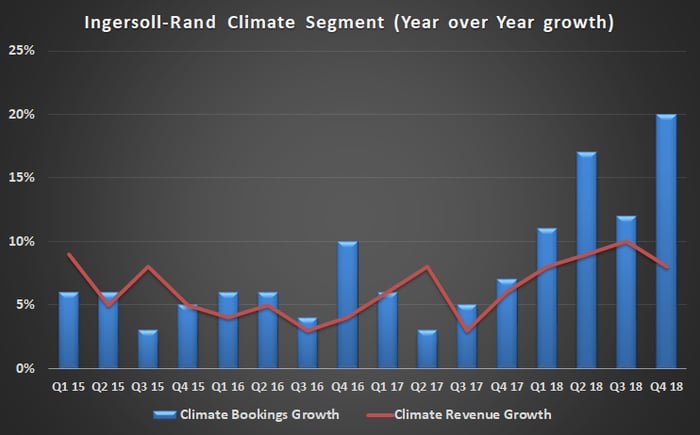 It's understandable if investors might be concerned by the impact of slowdown in the U.S. housing market. But as Lamach pointed out on the recent fourth-quarter earnings call, 85% of the company's HVAC equipment sales go to replacement. Since residential HVAC represents only 10% of total sales, the company's exposure to new housing construction is just 1% to 2% of sales.

The other two big talking points in the industry are cost increases and potential consolidation. The good news is that despite significant cost price pressure, total adjusted operating income margin increased to 12.8% from 12.2% in 2017 -- a notably better performance than that reported by United Technologies' Carrier. Furthermore, Lamach expects further improvement to 13.1% to 13.6% operating income margin in 2019.

Regarding consolidation, United Technologies is spinning off Carrier, meaning its management has more flexibility to make acquisitions. And Johnson Controls is selling its power solutions (automotive batteries) business, partly "to capture strategic opportunities in the HVAC industry," according to its CEO George Oliver in a press release.

Regulatory and tax issues may well create problematic issues for mergers between the larger players, but the HVAC market is highly fragmented, and it's possible the larger players will start to buy/merge with the smaller ones.

Indeed, according to Lamach at a recent conference, industry consolidation could happen over time, and this could lead to a more favorable pricing environment for the major HVAC players like Ingersoll-Rand.

Management's 2019 guidance calls for adjusted EPS of $6.15 to $6.35, implying growth of 11.4% at the midpoint of guidance and putting the stock on a forward PE multiple of 17 times earnings. Meanwhile, better working capital management and a reduction in capital expenditures are expected to lead to the company converting net income to free cash flow (FCF) at a 100%-plus rate again.

FCF is expected to be $1.6 billion in 2019, putting the company on a forward price-to-FCF multiple of 16 times. That looks too cheap for a company with such attractive long-term end markets and suggests the Goldman Sachs call is a good one. Throw in the argument that guidance looks conservative when compared with bookings trends and Ingersoll-Rand is a buy.