Please ensure Javascript is enabled for purposes of website accessibility
Log In Help Join The Motley Fool
Free Article Join Over 1 Million Premium Members And Get More In-Depth Stock Guidance and Research
By Lee Samaha - Updated Apr 23, 2019 at 12:01AM

The company's recent results were well received, and there's evidence that it's on the right track to generate returns for investors.

Ever since the announcement that industrial conglomerate United Technologies (RTX 0.95%) intends to split up, investors have been wondering whether the split really would release value in the way that management is hoping. Let's reassess the question in light of the recent fourth-quarter earnings reports.

Timing and cost of the separation

There are two main concerns that investors have over United Technologies and the forthcoming split.

The first relates to the timing and hefty separation costs and dis-synergies associated with the deal. Going back to the breakup announcement, CEO Greg Hayes had outlined his expectation for one-time breakup costs in a range of $2.5 billion to $3 billion, with $350 million to $400 million in negative synergy from the breakup. Meanwhile, the separation was seen as taking 18 to 24 months -- a long time to wait in an uncertain economic environment. 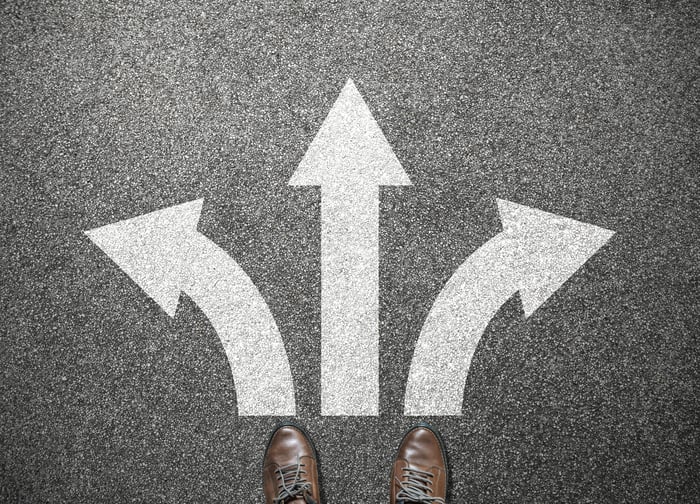 On the Q4 earnings call, Hayes had a positive update, informing investors that the time frame had been shortened: "Based on the work we've done over the last two months, we now see a path to achieve the separation in no more than about 18 months." This should please impatient investors.

Hayes also addressed the issues of estimated costs and dis-synergies coming from the split. He hinted at structural cost-reduction actions that Carrier (heating, ventilation and air conditioning, and security products) and Otis (elevators) management were looking at in order to minimize dis-synergies, but for now, it's better to assume the $350 million-$400 million dis-synergies estimate will apply. To put these figures into context, capitalizing them would make them worth $3 billion to $4 billion -- equivalent to 3% to 4% of United Technologies' market cap.

That said, United Technologies on the whole still trades at a substantive discount to its peers, so a 3%-4% "cost" to the market cap should be more than made up for if the stock gets a re-rating in line with its peers. 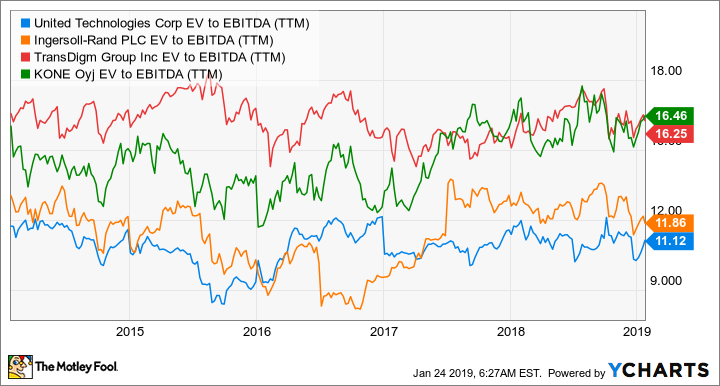 Business trajectory of the three businesses

The second major concern among investors relates to the divergence in performance of the aerospace business (Pratt & Whitney, the legacy United Technologies Aerospace Systems, and the acquired Rockwell Collins) and the two commercial businesses, Carrier and Otis.

The aerospace business put in another very strong quarter, including a stronger-than-expected contribution from the newly acquired Rockwell Collins. In fact, the company's overall organic sales grew 8% in 2018, compared with an estimate for 6% given as recently as November. The reason? Ongoing strength in aerospace.

As previously noted, the aerospace businesses have been outperforming expectations, while Otis and Carrier have been underperforming, and investors feared that management was losing focus and the two businesses were set for weakness before the spinoffs.

However, the recent results and outlook for 2019 suggested that both businesses are actually set for improvement.

Otis' adjusted operating profit declined by $64 million to $1,986 million for the full year but rose 7% in constant currency in the fourth quarter, "marking the first quarter of earnings growth since Q3 2015," according to Carroll Lane, VP of investor relations. Moreover, management's forecast for Otis in 2019 calls for organic sales growth in the low to mid single digits and adjusted operating profit to grow by between $25 million and $75 million. CFO Akhil Johri also mentioned a "stable new equipment market in China in 2019."

Carrier, a business formerly known as UTC Climate, Controls & Security, had a good year in terms of sales -- organic sales were up 6% for the full year  -- but its margin performance has been disappointing in recent years. Full-year adjusted operating margin at Carrier declined to 16.2% from 16.8% in 2017, and despite management previously blaming a host of issues -- product mix, geographic mix, new-product sales margins, commodity costs, etc. -- it's hard not to think that there's room for improvement.

However, it appears that, here too, management is set to turn the corner. Lane pointed out that "[f]or the first time this year, pricing more than offset input cost headwinds," and turning to the 2019 outlook Johri said, "Volume related drop-through, pricing and productivity should more than offset input cost headwinds." Carrier's adjusted operating profit is expected to improve by between $125 million and $175 million from $3,058 million in 2018.

All told, the key takeaways from the recent results are that the aerospace segment continues to outperform, the Rockwell Collins acquisition is off to a bright start, and there are real signs that performance at Otis and Carrier is starting to improve. All of this augurs well for the spinoffs, and United Technologies investors can continue to expect management to deliver value in the coming years.