Please ensure Javascript is enabled for purposes of website accessibility
Log In Help Join The Motley Fool
Free Article Join Over 1 Million Premium Members And Get More In-Depth Stock Guidance and Research
By Lee Samaha - Feb 23, 2018 at 8:29AM

The air conditioning market is attractive, but which company is doing better?

United Technologies Corporation (RTX 0.38%) and Ingersoll-Rand (TT 1.65%) are key competitors in the heating, ventilation, and air-conditioning (HVAC) market, and combining their respective outlooks will tell you a lot about industry prospects in 2018. As such, let's look at which company's HVAC operations had a better fourth quarter in terms of results and outlook: United Technologies' Carrier or Ingersoll-Rand's Trane.

What HVAC means to both companies

Frankly, both stocks are attractive investments. United Technologies trades at a discount to its peers, even while it's transitioning to long-term growth in three of its four segments, namely its aerospace operations (Pratt & Whitney and UTC aerospace systems) and elevator business Otis. 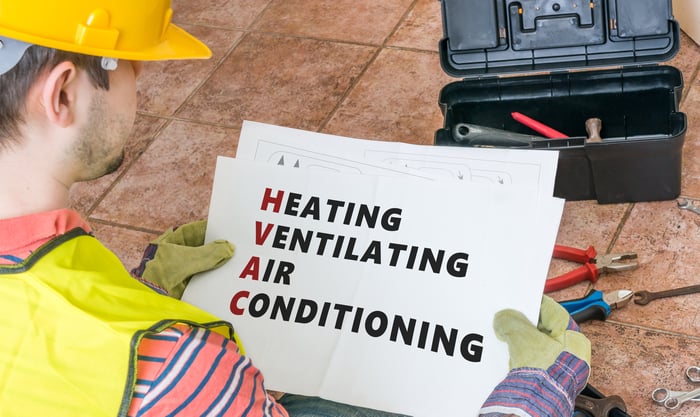 The fourth-quarter earnings saw United Technologies on track with its aerospace operations, and attention now turns to the UTC climate, controls, and security (CCS) segment. CCS matters because it's the only segment not seeing significant near-term earnings headwinds, and as such it contributed 36% of segment operating profit in 2017.

Turning to Ingersoll-Rand, the climate segment contributed 81% of segment operating profit in 2017, and it's the key to the investment thesis behind buying the stock.

Simply put, Ingersoll-Rand has an opportunity to expand margin and cash flow generation at Trane. Moreover, a buoyant housing market and growing commercial construction activity in North America combined with emerging-market growth offer opportunities for revenue growth in the HVAC market, making Ingersoll-Rand more of a pure-play on the investing theme.

In common with many other companies in the industrial sector, both of these companies are facing the same question in 2018. Specifically, revenue is growing in line with stronger economic growth, but raw material costs are pressuring margin growth. With this in mind, let's look at revenue and order trends at both businesses, and specifically with HVAC in mind.

Both companies are seeing good ongoing growth in sales and orders, and booking remains strong -- indicating good growth in 2018. 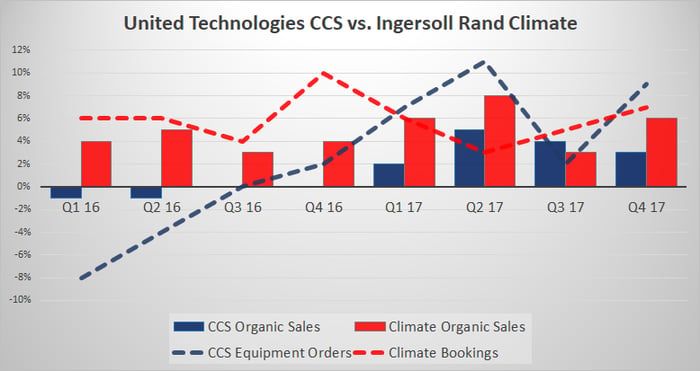 In fact, the strong orders growth from both companies' HVAC operations in the fourth quarter suggests that both sets of management are being conservative with their guidance for 2018.

Digging into the specific guidance on HVAC for 2018 -- both the CCS and Climate segments contain other activities -- makes it clear that they share a similarly positive outlook. Both companies expect mid-single-digit growth in the residential market in the Americas. However, Ingersoll-Rand has a slightly better outlook for commercial HVAC than United Technologies -- up mid-single digits compared to low-to mid-single digits.

While there isn't much difference between these companies in terms of revenue, orders, and sales outlook, I would argue that Ingersoll-Rand's underlying margin performance is better. This is a key point, because both companies will be hoping to leverage revenue growth into profits.

Here's a look at margin changes at both segments. (For reference, 100 basis points (bp) equals 1%, so, for example, the 80 bp decline in Ingersoll-Rand's climate segment's adjusted margin in the fourth quarter represents a move from 13.7% to 12.9%.) On a superficial basis, United Technologies had a much better fourth quarter, but aside from the fact that it had easier comparisons, there is one key reason Ingersoll-Rand is doing better. 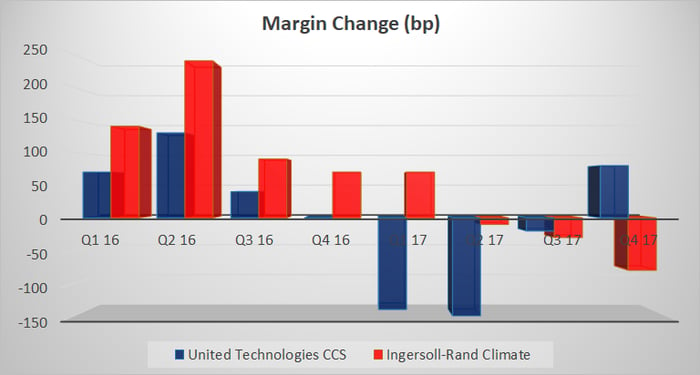 The margin decline at Ingersoll-Rand climate is largely related to better-than-expected success in penetrating the commercial HVAC market in China. In fact, overall company margin increased 20 bp to 11.1% in the fourth quarter but was held back by an 80 bp headwind in the climate segment created by what the company calls price/material inflation -- 50 bp of this was due to China. Meanwhile, volume, sales mix, and currency contributed 100 bp.

In other words, Ingersoll-Rand is offsetting raw material inflation with price increases, but the expansion into China is holding back margin growth. However, the good news is that CEO Mike Lamach said on the conference call that he expects a better pricing environment in 2018: "And so I'm confident that pricing increases because we've in some ways priced those projects coming through to shipment in 2018. I think competitive dynamics there would point to rise in prices in China as well."

It's a different story with United Technologies. During the earnings call, CEO Greg Hayes said he was "a little disappointed in fourth-quarter performance at CCS," with CFO Akhil Johri outlining that this was due to margin performance rather than revenue or orders.

Answering a question from J.P. Morgan's Steve Tusa, Johri said, "the big markets where we have seen the pressure have been China and Middle East, and we are seeing a little bit of moderation, but not much."

In fact, going back to the second quarter, management outlined a plethora of reasons CCS margin has been weak, including product mix, geographic mix, and new product sales. Ultimately, Johri says he does expect a positive contribution from price/cost of $50 million for CCS in 2018 -- overall CCS profit is expected to increase $100 million to $150 million -- but described it as "one watch item to still observe."

Ingersoll-Rand's expansion into China is something for investors to welcome, and hopefully, margin performance will improve as the year progresses. On the other hand, it's not entirely clear why United Technologies isn't doing better on CCS margin, and it's a cause for investor concern. Ingersoll-Rand had the better quarter in terms of HVAC performance.

All told, the key to Ingersoll-Rand's stock prospects is its HVAC operation, and it's performing well enough to justify buying the stock. United Technologies is an attractive stock in its own right, but if there is a weak point in its current performance, it's coming from its CCS segment.