The stock prices of United Technologies (RTX 0.31%), United Parcel Service (UPS 1.15%), and Ingersoll-Rand (TT 1.27%) all fell recently after they reported their third-quarter results, and although each has recovered somewhat, they remain below their 2017 highs. It's therefore worth taking a look at all three to see if those declines provide a good value entry for investors. 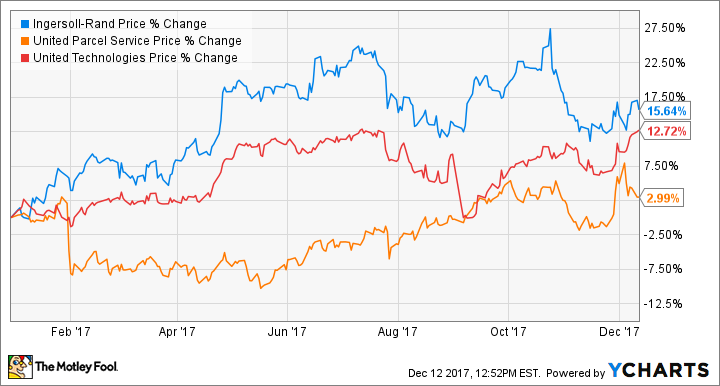 United Technologies: A stock for the patient

There wasn't a lot wrong with United Technologies's Q3 results, but the reality is that the key drivers of the stock's performance are of a strategic, long-term nature.

The investment case for buying United Technologies rests on the idea that it trades at a significant discount to its peers, yet it's in a phase where it's earnings growth is being held back by the moves it's making to generate long-term earnings and cash flow. Arguably, the stock should actually trade at a premium during this phase, but markets rarely do what they are expected to do. The chart below shows forward enterprise value (market cap plus net debt) to EBITDA -- a commonly used valuation metric. 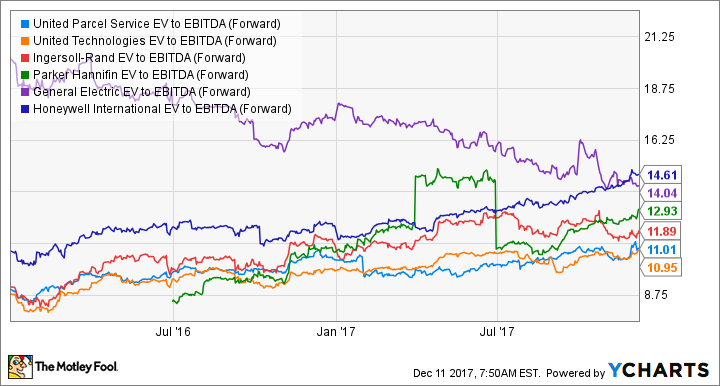 Skimming through that latest earnings report, one can see that United Technologies made progress on most of its objectives:

The idea is that establishing GTFs on aircraft -- they're the sole engine being used on Bombardier's CSeries, and they're also an option on the Airbus A320Neo -- and selling more Otis elevators in China will generate long-term service and aftermarket revenue for the company. Meanwhile, adding Rockwell Collins' (COL) avionics and flight controls to United Technologies' mechanically actuated aircraft systems will create a company better positioned to negotiate with Boeing and Airbus.

Ultimately, United Technologies remains on track with its long-term objectives, so any weakness in the stock price should be seen as a buying opportunity for long-term bulls.

FedEx Corporation (FDX -0.12%) and UPS have similar issues to deal with overy the next few years. Both need to convince the market that the capital spending requirements demanded by rising e-commerce delivery volumes won't impinge on free-cash-flow generation.

Both have felt margin pressure due to those increasing e-commerce deliveries, and in Q3, UPS's core domestic package segment came under further margin pressure. Management has made it clear that it's not running the business with a focus on near-term margin, but rather on long-term growth -- commentary that likely generated concern in some quarters.

However, it's not all bad news. UPS's stock dipped after it delivered its Q3 results, but has somewhat recovered thanks to a broader bounce in the transportation sector. In addition, there are signs that UPS' and FedEx's pricing actions are leading to volume and yield growth in e-commerce.

All told, it's far from clear whether UPS or FedEx will be able to expand margin in the manner that many investors are hoping for, and it makes sense to wait until both companies are demonstrably on the path to expanding e-commerce delivery margin before buying in--dip or no dip.

The situation with the air conditioning and industrial products company's stock is rather more prosaic, and I think its recent dip in price is a buying opportunity.

The investment case for buying Ingersoll-Rand stock rests on the following points:

The industrial segment is performing well in 2017; according to CFO Susan Carter on the Q3 earnings call, it "is actually performing a bit better than our guidance with strong organic bookings growth of 5% overall" in the third-quarter. 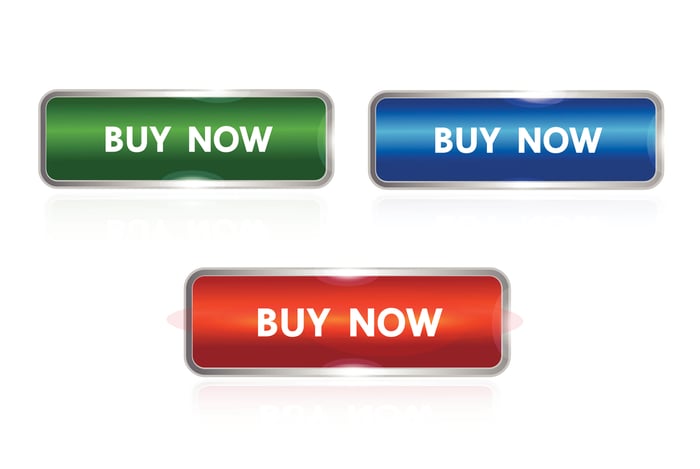 However, the prime reason why the stock fell post-earnings was probably the reduction in overall adjusted operating margin from 14.5% to 14.1%. The guilty party was its climate segment, which generates 83% of segment operating income. Its adjusted operating margin declined year over year to 16.5% from 16.8%, and CEO Mike Lamach basically admitted he wasn't happy with margin performance overall, saying, "[O]ne area that we're not satisfied with and we expect to improve on in 2018 is our operating leverage." By operating leverage, he simply means the company's ability to convert increased revenue into operating income through margin expansion.

But here's the thing. In fact, here are the four things:

All told, the margin pressure is coming from a good reason--increased sales in emerging markets--and Ingersoll-Rand remains on an attractive valuation. Management expects $1.2 billion in free cash flow in 2017, putting the stock on a free cash flow to market cap yield of nearly 5.5%. That's attractive for a company expected to grow earnings by 13.5% next year, and I think Ingersoll-Rand stock is worth picking up now.