Please ensure Javascript is enabled for purposes of website accessibility
Log In Help Join The Motley Fool
Free Article Join Over 1 Million Premium Members And Get More In-Depth Stock Guidance and Research
By Lee Samaha - Feb 5, 2018 at 9:50AM

The conglomerate's aerospace operations cheered investors -- and there was good news for Airbus, too.

The investment case behind buying United Technologies Corporation (RTX 0.29%) rests on the idea that strategic investments made in the past few years will lead to significantly improved earnings and cash flow in the future. As such, it's a good idea to track strategic developments to gauge how well management is progressing on its long march to releasing value for shareholders.

Let's look, then, at the key takeaways from the recent fourth-quarter results, with a focus on the company's aerospace operations.

Management's 2018 guidance implies a pickup in organic sales growth accompanied by a significant increase in free cash flow and earnings-per-share (EPS) growth in the range of 3% to 6.8% range. The analyst consensus is for EPS of $7.02 and $7.82 in the next couple of years -- implying earnings growth of 5.6% and 11.4% over that period. On a headline basis, the company looks set to see the fruit of its labors in 2019.

Data source: United Technologies Corporation presentations. Does not include assumptions for Rockwell Collins.

In addition, the stock remains the most cheaply rated on an EV/EBITDA basis within its peer group, which includes General Electric Company (GE -0.94%) and other conglomerates with major aerospace operations. 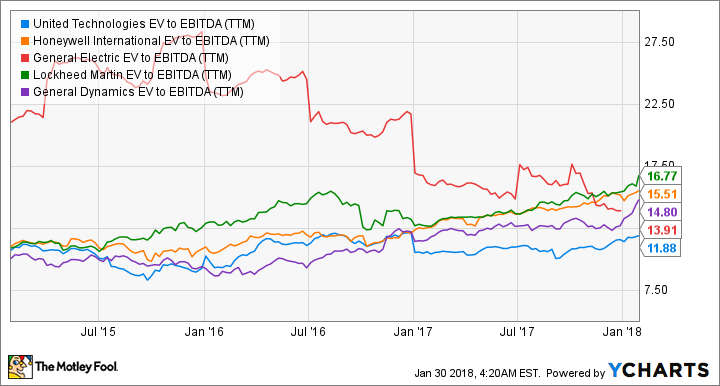 The question is whether you believe in the numbers -- something that requires having confidence in management's projections for its business units. Let's focus on aerospace (Pratt & Whitney and UTC Aerospace Systems) for now.

All told, the major technical issues on the GTF appear to have been fixed -- good news for Airbus as it ramps production on the A320NEO. Moreover, the GTF should start to regain order share against GE's LEAP, and management is confident on cutting unit production costs as it ramps up shipments of the engine.

The aerospace systems segment looks set for a better year in 2018, with ongoing strength in commercial aerospace aftermarket sales helping offset volume and mix headwinds with commercial original equipment (OE). The issue with the latter is that a number of new aircraft programs are causing a shift in revenue mix from legacy aircraft to new aircraft programs (newer parts initially come with lower margin, as it takes time to cut unit production costs) and the loss of a landing-gear contract on the Boeing 777.

Somewhat puzzlingly, the forecast for commercial aftermarket sales growth in 2018 is only "low/mid-single" digits. It looks like a bit conservative, considering growth averaged 10% in the last four quarters and GE Aviation's spares rate grew to a rate of $27.4 million a day in its fourth quarter, compared with $20.2 million in the same period last year. 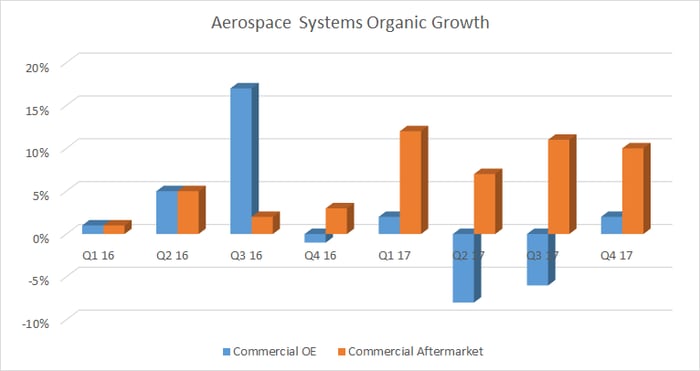 It was a good update for United Technologies in aerospace. Aerospace systems confirmed the strength already seen in GE's aftermarket sales, and commercial OE sales look set to pick up.

Meanwhile, Pratt & Whitney's GTF looks set to compete more vigorously with GE's LEAP engine for orders on the Airbus A320NEO. In addition, the GTF production forecast is good news for Airbus as it seeks to ramp up A320NEO production, and because it's now a partner on Bombardier's C-Series program -- the GTF is the sole engine option on the C-Series.

All told, the fourth-quarter results and commentary show that United Technologies is on track with its strategic objectives in aerospace in 2018. That's good news for investors.