Oppenheimer warms to the turnaround story at the big-box retailer.

Gloomy. Uninspiring. Obsolete. As recently as just a few years ago, these were some of the things analysts were saying about electronics and home appliances retailer Best Buy (BBY 0.31%). Best Buy "will never be able to offer competitive prices" so as to compete with Amazon.com (AMZN -3.01%), Fool.com contributor Rick Munarriz wrote.

But my, how things have changed.

Last quarter, Best Buy reported a small decline in sales -- but doubled its profits -- and promised a return to sales growth and even greater profits in the new year. News like this was bound to grab Wall Street's notice, and this morning, Oppenheimer & Co. awarded Best Buy stock an upgrade to outperform and an $86 price target, promising 19% upside from today's prices.

Check out the latest earnings call transcripts for Best Buy and Amazon. 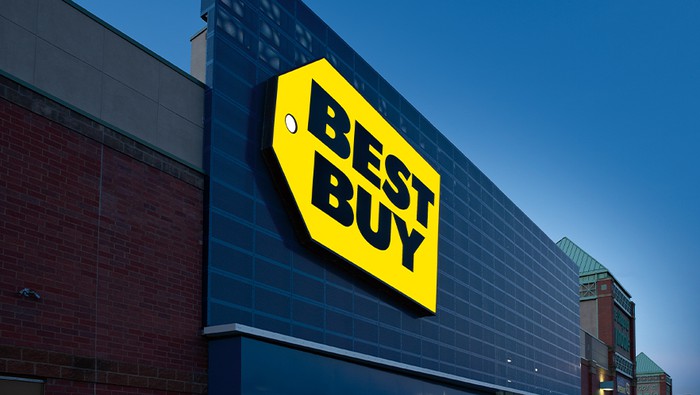 Time to tune in

Best Buy may have looked like something of a basket case a few years ago, but as Oppenheimer explains in its new upgrade covered on StreetInsider.com (subscription required), "Over the past few years, under the direction of new senior leadership, Best Buy has undergone a significant transformation, whereby it evolved from a traditional chain of large-format superstores to one of retail's preeminent omni-channel operators."

Thanks to a strong presence on the web and cost controls in stores, Best Buy has stabilized its gross margin and increased its operating profit margin by more than a third over the past five years, to 4.6%. As for the company's ability to compete with Amazon, earlier this month, Loop Capital noted that based on a survey of identical items sold both on Amazon and at Best Buy, the latter's pricing is "very competitive" with the former, with differences in pricing narrowing to just 2.1%, as reported on TheFly.com.

Back at Oppenheimer, they're looking forward to "new drivers" to grow sales and earnings even further. And Loop explains that among these will be the "forthcoming 5G wireless technology wave."

This could, in fact, play to Best Buy's strengths in physical retail and the provision of services to less-than-100%-tech-savvy customers. As 5G wireless internet devices become available for sale, Amazon may offer the best prices (at least, 2% better). But for shoppers who could do with a bit of hand-holding, who need the technology explained to them, and who could perhaps hire a few "Geek Squad" technicians to come to their homes and set up internet service, buying from Best Buy might be worth a few extra dollars.

Speaking of physical stores, let's not forget that after the bankruptcies of Circuit City, Radio Shack, hhgregg, and Sears, Best Buy has kind of been placed in the position of "last man standing," notes Loop. (Sure, there's still Fry's out there to contend with, and probably a few other electronic retailers. But Fry's has less than three dozen outposts to its name, versus roughly 1,500 stores in the Best Buy chain.)

So not only does this permit Best Buy to pick up sales from folks who might otherwise have shopped at a physical competitor, Best Buy is also basically the only alternative to Amazon left -- or at least the only one that's both local to many consumers and operating at scale.

But as Oppenheimer laments, few investors have clued into this story as of yet, and Best Buy stock is up an anemic 4% over the last year -- half the gains of the S&P 500. Simply put, "investors are still not fully embracing improved sales and EPS power of Best Buy."

Should they? Should you?

At $19 billion in market capitalization (and with an even cheaper enterprise value), Best Buy stock sells for just 13 times trailing earnings, and less than 12 times free cash flow. Granted, right now most analysts only think that the company is capable of growing profits at 8% annually over the long term, according to S&P Global Market Intelligence. But between that growth rate and Best Buy's 2.8% dividend yield, that makes for a likely 10.8% annualized total return -- almost high enough to justify a 12 times FCF valuation already.

If Oppenheimer (and Loop) are right, and investors are underestimating the growth Best Buy can achieve -- and last quarter's 100% surge in profits suggests they might be -- it's possible Best Buy stock could be worth a lot more.