Just as carmakers aren't sued when a drunk driver causes a fatality, gunmakers have been similarly protected against lawsuits if one of their firearms is used in the commission of a crime that results in death. Until now, the 2005 Protection of Lawful Commerce in Arms Act prevented gunmakers from being sued unless they directly sell a firearm to someone knowing they will use it to commit a crime.

But the recent ruling by the Connecticut Supreme Court allowing the revival of a lawsuit against rifle manufacturer Remington Arms by parents of some of the children killed in the Sandy Hook Elementary School shooting in 2012, is a case that could end up undoing the product liability protections gunmakers have enjoyed. 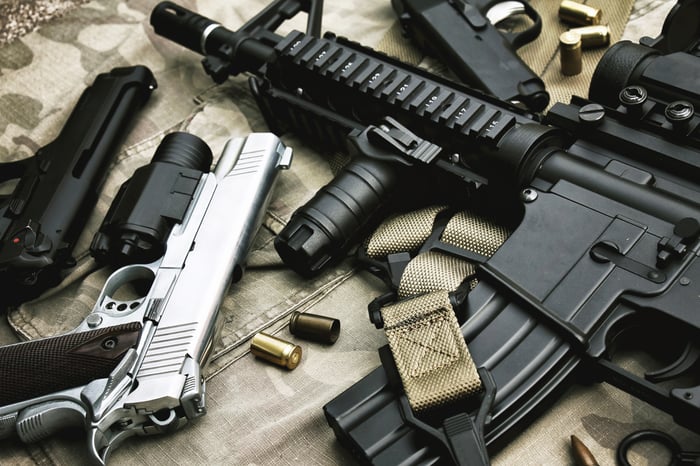 Although civilian rifles may look like their military counterparts, they function differently. Image source: Getty Images.

Piercing the layer of legal protection

At first glance, it may seem easy to dismiss the ruling as one that will likely be overturned on appeal, but because gunmakers can also be sued if they violate state law, there is reason to believe an appeal may not be so open and shut, and Remington may end up being held accountable for murders committed by a third party.

The plaintiffs sued Remington under Connecticut's Unfair Trade Practices Act, arguing that Remington advertising the rifle as a "military-style" weapon made a troubled youth like Adam Lanza, who shot 20 children and six adults, more susceptible to selecting the gunmaker's Bushmaster XM15 rifle.

In the ruling allowing the lawsuit to move forward, the court said, "Once we accept the premise that Congress did not intend to immunize firearms suppliers who engage in truly unethical and irresponsible marketing practices promoting criminal conduct, it falls to a jury to decide whether the promotional schemes alleged in the present case rise to the level of illegal trade practices and whether fault for the tragedy can be laid at their feet."

In short, Remington could be held liable if a jury finds the gunmaker's marketing of the firearm contributed to the tragedy. While it would seem a dramatic expansion of the definition of marketing practices, courts might not necessarily want to intrude on a state's prerogative. And if that happens, it might very well cause a flood of other states to pass similar laws.

Not a military-grade weapon

There are, of course, problems with the argument. While the Bushmaster rifle is an AR-15 style of semiautomatic weapon, and such rifles are pejoratively called "assault rifles," it's an incorrect term because such automatic rifles are actually machine guns and have been heavily regulated since 1934. Civilian ownership of them was banned in 1986.

Connecticut, though, banned semi-automatic rifles like the AR15 in 2013 after the Sandy Hook shooting, as did New York. The U.S. Supreme Court subsequently declined to hear a challenge to the laws, thus leaving the bans in place.

The AR in the gun style's name, however, actually means "ArmaLite rifle," referring to the original manufacturer of the firearm. ArmaLite sold the rights to the design to storied gunmaker Colt, which modified it and sold it to the U.S. military as the M16 automatic rifle. Colt then made a civilian version, which is why it is often confused with a military weapon.

The primary difference between the two is the M16 is a fully automatic rifle while the AR15 is semi-automatic. That means the AR can only fire a single round with each pull of the trigger.  Although AR-15s may come with accessories such as grips and muzzle shrouds that make them look more militaristic, that doesn't make them military weapons.

Nor should publicizing their lineage be seen as "unethical and irresponsible." Though they may look it, they are no more dangerous or lethal than a more traditional-looking rifle and in fact are often chambered for ammo that's less powerful than other rifle ammo, such as the .30-06 Springfield cartridge or the .300 Winchester Magnum.

The AR-15 is the most popular rifle on the market today, with well over 1 million sold each year. Although Remington may be best known for selling rifles, Sturm, Ruger (NYSE:RGR) is actually the biggest manufacturer of rifles.

According to Bureau of Alcohol Tobacco Firearms and Explosives (ATF) data for 2017 (the most recent information available), Ruger made more than 661,000 rifles compared to Remington producing 453,000. Vista Outdoor (NYSE:VSTO) was third with nearly 365,000 produced through its Savage Arms division, while American Outdoor Brands' (NASDAQ:SWBI) Smith & Wesson made 235,000.

Obviously not every one of them is an AR-style rifle, but American Outdoor credits increased demand for its modern sporting rifles (the industry term for ARs) as the reason firearms sales rose 5% last quarter, while in years past, Ruger has said such rifles, like its AR-556, were responsible for driving sales higher when they were introduced.

Check out the latest earnings call transcript for Sturm, Ruger.

Remington is certain to appeal the Connecticut court's ruling, and despite there being a lot of reason to think the decision will be overturned, it's not nearly as sure a thing as it might have been had the court endorsed a different legal argument. If and when it reaches the U.S. Supreme Court, it won't necessarily be a Second Amendment case that's being heard but more of a procedural one, and like the more severe gun ban ruling the court previously refused to hear, that could result in the decision being upheld.