This pipeline giant has quite a few catalysts coming in April.

While long-term investing is a proven winner, it can pay to be aware of short-term catalysts looming over the horizon. Buying before they come to fruition can enable investors to earn even higher returns over the long term.

One stock with a couple of anticipated catalysts in the next month is natural gas pipeline giant Kinder Morgan (KMI -0.92%). They could propel the company's stock -- which has already rallied sharply this year -- even higher as they come to fruition. That's why investors might want to consider buying before this month ends. 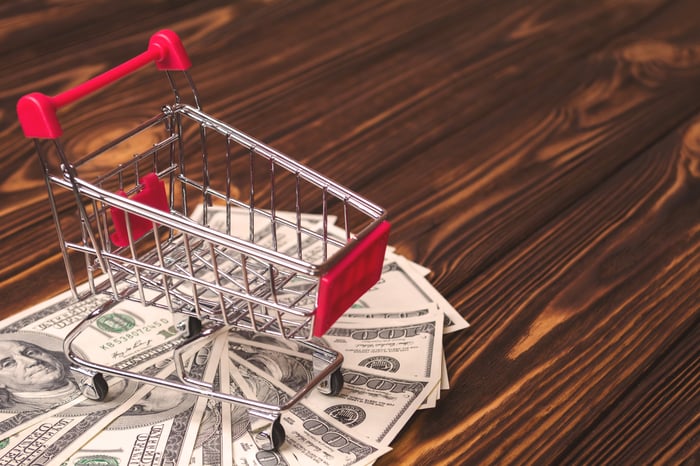 Catalyst no. 1: Another 25% dividend increase

Kinder Morgan unveiled its 2019 financial expectations last December. Its plans include returning more cash to shareholders through another dividend increase. The company noted at the time that it expects to raise its dividend from $0.80 to $1.00 per share during the first quarter of this year. That implies a 25% boost from its current rate and 100% above what it paid in 2017.

With shares recently selling for around $20 apiece, Kinder Morgan's current dividend yields 4%. However, that will increase to an even more attractive 5% assuming the company follows through with its planned raise.

The company usually declares its dividend when it reports quarterly results. Historically, it has announced its first-quarter numbers and dividend in mid-April, with it typically making that payment 30 days later to investors who own shares as of the end of the month. While that means investors have time to purchase shares to collect that dividend, it's always possible that the stock could rally after earnings, especially if they come in stronger than expected or the company unveils other good news. That's why they might want to buy before March ends to lock in a 5% yield.

Catalyst no. 2: A decision on Kinder Morgan Canada

Another thing Kinder Morgan will likely announce by mid-April is its plans for Canadian subsidiary Kinder Morgan Canada (KML). The company initially formed that entity in 2017 to help finance the expansion of the Trans Mountain Pipeline. However, it sold that controversial system to the government of Canada last year, which left the future of Kinder Morgan Canada up in the air.

Chief strategy officer Dax Sanders commented on the ongoing review during the fourth-quarter call by stating that: "While we don't have anything to announce as the review is ongoing, we are hopeful that we will have the review completed and a direction to announce by the next earnings call." Among the options it's mulling over are merging Kinder Morgan Canada with another Canadian midstream company, selling it outright, taking it private, or maintaining the status quo.

Clarity on what the future holds for this company could boost Kinder Morgan's stock, especially if it sells Kinder Morgan Canada to a third party at a premium valuation, since that could give it the cash to buy back more of its dirt cheap shares.

Another potential catalyst to keep an eye on

In addition to the near certainty that Kinder Morgan boosts its dividend 25% and unveils its plans for Kinder Morgan Canada, the company could also sanction a few more expansion projects next month. The company currently has several projects in development that it could formally add to the backlog.

In January, for example, Kinder Morgan signed an exclusive agreement with Tallgrass Energy (TGE) for expanded crude oil transportation services out of the Rockies. Kinder Morgan would contribute two underutilized gas pipelines to the joint venture, which would move more oil through Tallgrass Energy's Pony Express Pipeline. If this partnership is successful in securing enough customer contracts to move forward, it could also enable Kinder Morgan to expand its Double H pipeline out of North Dakota.

In addition to those projects, Kinder Morgan launched a joint effort with Phillips 66 Partners (PSXP) to secure additional shippers for two pipelines in Texas. If successful, Kinder Morgan would expand its crude and condensate system by 100,000 barrels per day, with that oil coming from customers on Phillips 66 Partners' Gray Oak Pipeline that's currently under construction.

If Kinder Morgan can officially secure these or other projects, it would improve the long-term visibility of the company's growth prospects. That would give investors more confidence in the company's ability to continue expanding cash flow and the dividend beyond its current outlook, which stretches through next year.

April could be a big month

Kinder Morgan's stock is already up sharply this year thanks to improving oil market conditions. The company could add more fuel to that rally when it reports its first-quarter results next month since it should also give investors another big raise and unveil its plans for Kinder Morgan Canada. Add in the possibility of the company greenlighting a boatload of new projects, and investors might want to buy before March ends just in case shares bounce even higher next month.